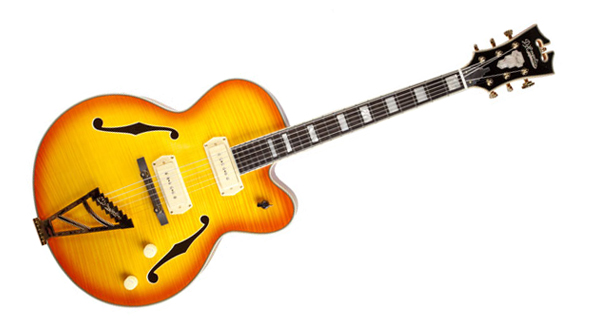 The D’Angelico Style B and Excel models, part the USA Master-Builder Series, are the result of extensive historic research and MRI scans of the original instruments and offer players the opportunity to own some of D’Angelico’s most historically sought-after instruments. After testing the Master-Builder Excel, guitar legend and Rock and Roll Hall of Fame inductee, Eric Clapton worked with D’Angelico to design the new Style B model to fit his own specifications perfectly. He then graciously signed that Master-Builder Excel to be auctioned off at the upcoming John Varvatos 11th Annual Stuart House Benefit, of which D’Angelico is a Patron Supporter. These limited run models are being built by acclaimed boutique luthier Gene Baker.

Although the D’Angelico archtop was originally considered a jazz guitar, the brand has attracted a wide following of devoted players beyond jazz musicians including the aforementioned Eric Clapton, Chet Atkins, John Mayer, Nile Rogers, Pete Townshend and Susan Tedeschi to name a few. “Our team at D’Angelico promises to build instruments that respect and honor John D’Angelico’s legacy of excellence and carry on the tradition of one of the world’s finest guitar brands,” said CEO Brenden Cohen. “Our 2014 models are replicas of John D’Angelico’s legendary aesthetic, attention to detail and the level of excellence established long ago by this master luthier.”