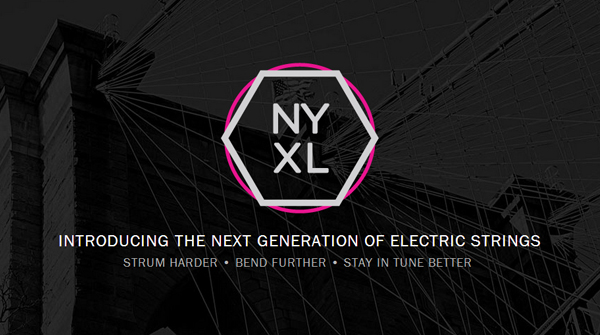 A new age in electric guitar strings beckons, and D'Addario are again leading the way with their newly announced NYXL series, offering levels of stability that have never been achieved before.

(PRESS RELEASE): D’Addario announces the launch of the next generation of electric guitar strings: NYXL. Fifty years ago, the most important innovation in electric strings was introduced to the world. Now, D’Addario is doing it again. NYXL electric guitar strings deliver to players a whole new level of freedom, confidence, and power, allowing them to play fearlessly.

Once again, D’Addario is revolutionizing the electric string. NYXL strings represent the long-awaited third generation. While the D’Addario family has been making strings for hundreds of years, the company considers it their responsibility to continue to pioneer and innovate.

“There have been only two meaningful generations of round wound electric guitar strings,” says D’Addario & Company, CEO and mastermind, Jim D’Addario.

“The original formula, originating in the 1950s, used pure nickel, creating a characteristically mellow sound. In the early sixties, my father, John D’Addario, Sr. introduced a brighter sounding, second generation nickel-plated steel string, which became the industry standard for the next five decades. Today, 80% of all electric guitar strings are based on his formula.”

D’Addario NYXL electric guitar strings have been re-engineered from the ball end up, and no string has ever offered this level of stability. Stronger than any of its predecessors, torture tests prove that NYXL strings stay in tune 131% better so guitarists don’t waste time tuning and can start playing sooner.

“This is the strongest set of electric guitar strings ever made. Arriving here wasn’t easy,” continues Mr. D’Addario.

“Our engineers traveled many paths, starting with the selection of new high-carbon steel alloys, completely re-imagining the wire drawing process, and revolutionizing the corrosion-resistant tin coating application. The result is something you have never experienced before: unprecedented strength and pitch stability.”

“The name of these strings, NYXL, is also an important distinction for us; our family and company have a rich history in New York,” adds Mr. D’Addario.

“Our new steel wire has been formulated, created, crafted, and perfected here in the Empire State. We are proud of our New York legacy, and even prouder that all of our strings originate at our Long Island home.”