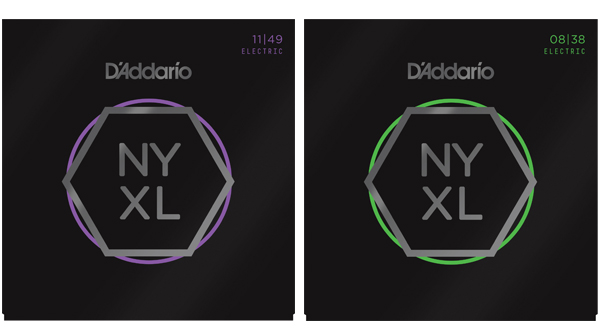 (PRESS RELEASE): D’Addario is thrilled to announce extensions to its revolutionary line of guitar strings, NYXL.

“D’Addario is once again answering the call of musicians worldwide,” says Brian Vance, Director of Product Management at D’Addario.

“Due to overwhelming requests and demand, we are already expanding the NYXL line with the introduction of new gauges and a complete singles line of NYXL plain steel and wound strings.”

D’Addario NYXL electric guitar strings have been re-engineered from the ball end up, and no string has ever offered this level of stability. Stronger than any of its predecessors, torture tests prove that NYXL strings stay in tune up to 131% better so guitarists don’t waste time tuning and can start playing sooner.Starting with the selection of new high-carbon steel alloys, D’Addario engineers have completely re-imagined the wire drawing process and revolutionized the corrosion-resistant tin coating application. The result is something guitarists have never experienced before: unprecedented strength and pitch stability.

These new sets and singles are available in the UK now.