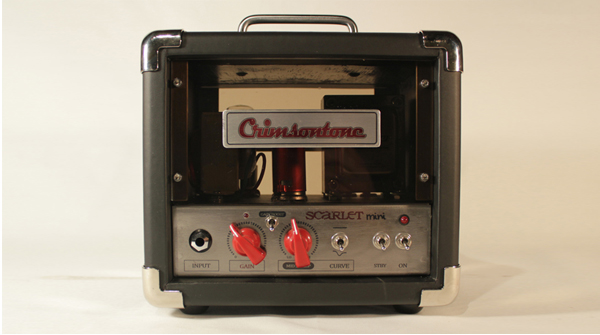 Continuing the Mini Series of small watt guitar amps,Crimsontone offers the SE Meany and Scarlet Mini. Based on the samecircuit design and features as the SE Mini, the SE Meany includestwo additional preamp gain stages for more overdrive, and a newlyredesigned shiftable Tone knob for increased tone shaping control.The Scarlet Mini takes the massive tone of its big brother - theScarlet - and packs it into a single channel, featuring the sameflexible Mid Sweep control and two switchable EQ Curvesettings.

In the mid watt range of heads comes the Moro. Cousin to theValencia, the Moro begins with the same chimey clean preamp design,then cascades into an additional 12AX7 preamp section for massiveamounts of gain. A sleek red and silver motif make this amp standout among the sea of traditional black tolex clad amps.

Specs for the SE Meany and Scarlet Mini:

Specs for the Moro:

All amps are custom built in Mesa, Arizona by hand and can bebuilt to spec or as-is. Street price for these models are $829 forthe SE Meany or Scarlet Mini and $1,359 for the Moro.