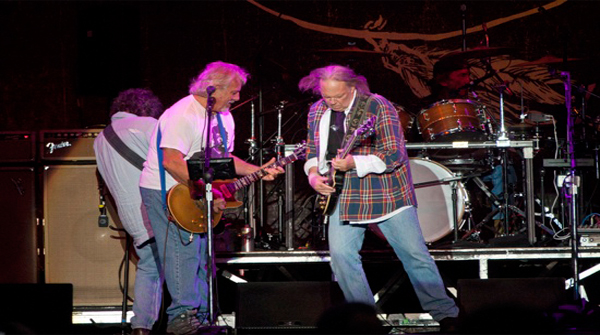 Neil Young and the newly reunitedCrazy Horse kicked off their tour inAlbuquerque, New Mexico at the beginning of August with a set-listcomprised of mainly new material.

Young, who was expected to perform tracks from his new album,'Americana', instead chose to perform a set laden with unreleasedmaterial that is set to be featured on new album, 'PsychedelicPill' with his longtime backing band later this year.

Crazy Horse guitarist Frank 'Poncho'Sampedro revealed the title of the album and somedetails regarding tracks in a recent interview with Rolling Stone, he said:

"That song began in the studio when Neil sat down at the pianoand began playing chords. Ralph [Molina] was on drums and hestarted this beat on the snare and wouldn't stop for nearly anhour. We stood up and played it and realized it was a great song.We just haven't performed it that great yet, but we're getting morecomfortable every night."

Sampedro went on to talk of his excitement for a track called'Walk Like a Giant which  proved popular at a recent liveshow, he continued:

"We played it one time and the next thing we know we're doingoverdubs. Then he played it for us. The playback blew our minds. Wehad no idea we'd done something that big. I imagine it's aboutEarth being destroyed by this giant, and we're screening the planetfor survivors and s-. I have all these images going through myhead. It's really crazy."

Fans can expect 'Psychedelic Pill' to arrive in sometimeOctober.