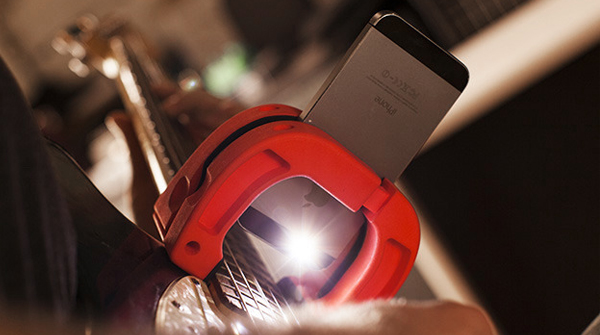 The Cracking the Code team has launched a new Kickstarter campaign for an innovative device for filming guitar: the Magnet. It’s the first camera mount that lets guitarists use their phones to capture incredible slow motion video of their playing.

From fun fretboard close-ups to cutting-edge analysis of playing technique, the Magnet is the easiest way for guitarists to get an amazingly revealing view of their hands.

By simply snapping the jaws, and dropping in a phone, the Magnet can be set up in seconds — no tools necessary. The Magnet expands in one direction to grip the neck of almost any six or seven-string guitar, four- or five-string bass, righty or lefty. And with its expandable cradle, it adjusts to almost any phone.

And with the optional Magnet GoPro adapter, players can even use one or two GoPros — in combination with their phones, or on their own — to film both hands at once.

Modern smartphones are the ideal guitar cameras. They can film at speeds up to 240 frames per second for an incredible 8x slowdown of hand movements. Together with the Magnet, they allow dedicated students to pinpoint and fix stubborn mistakes. And the Magnet’s unique close-up viewpoint can help teachers instantly identify student weaknesses.

Cracking the Code has pioneered the use of slow-motion video analysis to reveal playing techniques used by the world’s greatest guitarists. And now, with the Magnet, we’re bringing that capability to all players.

The Magnet on Kickstarter:

The Magnet + GoPro adapter on Kickstarter: