Could Led Zeppelin's Historic O2 Performance Finally be Making Its way to DVD? 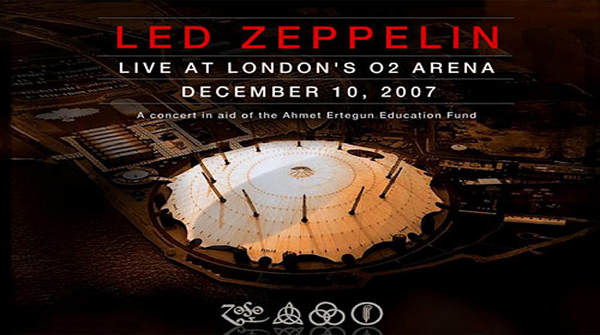 On a cold December night in 2007, arguably the greatest rock bandever to grace the planet reformed for one night only for a veryspecial show at the O2 Arena in London.

The show was for the Ahmet Ertegun Tribute Concert, held inmemory of music exec Ahmet Ertegun, and the band was obviouslyLed Zeppelin.

Now, 5 years after that iconic performance the millions of Led Zepfans worldwide who never got the chance to see the historicshowcase may soon be able to, reports Ultimate Classic Rock.

The co-hosts of 'That Metal Show', Eddie Trunkand Jim Florentine recently disclosed that they knewsomething big was coming from the Led Zep camp this year, and nowit would appear that something is a DVD & CD release of theshow. However the site that first broke the news, Belgian classicrock radio station RTBF has removed the original post from their website.

There's been rumours regarding a commercial release for years, butboth Jimmy Page and John Paul Jones have admittid that they weren'tin any kind of hurry to put something out,

"It was a special occasion you know and we really wanted thatjust to be it really," Jones said (quote via Led-Zeppelin.org).

The reunion marked the first full-length by the band concert sincethe death of drummerJohn Bonham in 1980,with his son, Jason, featured behind the kit.