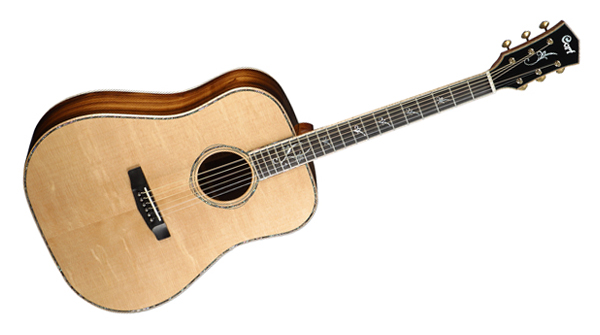 Cort Guitars unvei their 20th Anniversary Earth acoustic guitars. Each model will be available in limited quantities, built with the finest materials and adorned with the 20th Anniversary logo inside the sound hole.

The Cort Earth-LE2 MD is a dreadnought body made of Solid Madagascar Rosewood for the back and sides with a master grade solid Sitka spruce top. The three piece neck is made of mahogany and rosewood with flamed maple binding and an Indian rosewood fingerboard. Hardware includes gold Gotoh tuners and Graphtech TUSQ nut and saddle. The guitar is finished with highly detailed abalone inlay around the rosette, body binding, headstock, fingerboard, and is strung with Cleartone strings. Earth -LE2 MD is provided with Cort Deluxe hard case.

The Earth 20th is also a dreadnought body but made of Australian blackwood back and sides with a solid Sitka spruce top. The rosewood fingerboard is complimented by tortoise shell body binding and rosette. The Earth 20th is completed with Graphtech Nubone XB nut and saddle along with Cleartone strings.

Find out more at Cort Guitars