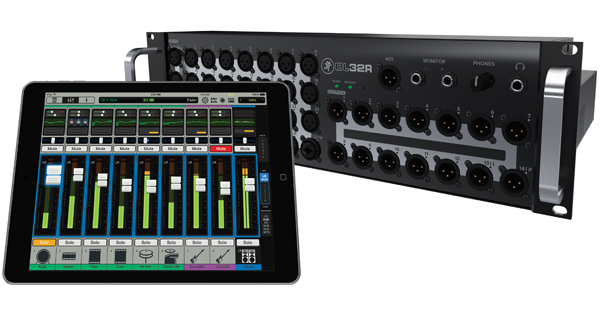 (PRESS RELEASE): Mackie today introduces a powerful new 32-channel digital mixing system completely controlled wirelessly from Mackie's intuitive Master Faderâ„¢ iPadÂ® app, freeing users to get in the mix like never before - the DL32R 32-Channel Wireless Digital Mixer with iPad Control. Featuring complete wireless control over everything, including fully-loaded DSP and multi-track recording/playback, you can control everything from anywhere with the DL32R.

"Early on, Mackie believed that we can bring the user incredible benefits if we just let go of old conventions," commented Ben Olswang, Mackie Senior Product Manager. "By ensuring that each and every feature can be controlled wirelessly without compromise, we are delivering benefits to users that were simply not possible before now."

The Mackie DL32R features a mix of flexible, professional I/O in an ultra-compact 3U rackmount design. Each of the 32 inputs (24 XLR, 8 XLR/TRS combo) feature Mackie's all-new Onyx+â„¢ recallable mic preamps, with remote control over preamp gain and phantom power. The new Onyx+ preamps outperform the industry-proven Onyx design, which has garnered rave reviews for its boutique-quality sound and performance.

"You get frequency response that goes all the way down to 20Hz within 1dB at all gain settings," remarked Olswang. "Noise is minimized at every gain setting, not just minimum and maximum like other mixers. Designed for the rigid standards of professional live sound, DL32R's gain changes are completely silent."

Fully-assignable using the Master Fader control app, there are 14 XLR outputs great for anything from stage monitors to matrix outputs. The front panel also features a stereo AES digital output for connecting gear like speaker processors. A dedicated stereo monitor output is ideal for connecting an in-ear monitor system for detailed listening from anywhere in the venue.

With complete wireless control of the system using Mackie's Master Fader iPad app, a new world of mixing possibilities opens up. There is no longer any need for a fixed FOH position. Place the mixer where it works best - be it next to the stage, backstage or even tucked away in a utility closet. This can also eliminate the need for an expensive, bulky analog snake.The DL32R does away with troublesome FOH positions such as under a balcony, behind a pillar, etc.  The user can tune the room right from the problem spots and get on stage to ring out monitors or work with the band to dial in the perfect monitor mix.

Multiple engineers can work wirelessly from a single DL32R mixer using their own iOS device, including monitor engineers and performers who wish to control their own monitor mixes. The lead engineer can apply access limiting to additional control devices, keeping the user from making unwanted changes.

"Just connect a USB hard drive loaded with your media directly to the DL32R and you can control it all from anywhere in the venue," remarks Olswang. "It's an amazing way to control things like backing tracks and intermission music all while recording the show. Plus, who wants to run back and forth to a separate recording rig?"

An additional USB 2.0 computer audio interface is available for 32x32 recording and playback that can directly connect with any DAW, great for studio applications and rehearsal spaces. Both methods provide the ability to record the band and perform a virtual soundcheck at the next show. This is a powerful and professional way to dial in a mix at any venue.

The DL32R is loaded with powerful DSP that eliminates the need for racks of expensive outboard processing. Each of the 32 inputs features a 4-band parametric EQ with a separate high-pass filter plus gating and compression. Four return channels feature dedicated EQ and compression. Each of the 14 aux sends, six matrix busses and main L/R busses feature a 4-band parametric EQ, 31-band GEQ, a compressor limiter and alignment delay. Six subgroups feature EQ and compression. Each processor features Modern and Vintage voicing options, delivering sonic choice to the user. Three separate effects processors with dedicated sends allow for two reverbs and one delay with tap control. 6 VCAs and 6 Mute Groups round out the processing.

"Only the DL32R delivers professional mixing tools like VCAs, subgroups and matrix busses at this price point," comments Olswang. "And there's no configuration or tradeoffs. Every input and output has all the processing you need for your professional application."

Designed from the ground up for live sound, Mackie's Master Fader iPad app delivers total wireless control over the DL32R. True to Mackie's ongoing commitment to creating mixers that are extremely easy to learn and to master, Master Fader provides fast navigation and very powerful tools for mixing 32-channels of audio.

"One of the most powerful features of Master Fader is our user-definable view groups," remarks Olswang. "Simply select the channels for each of the six view groups to easily switch between things like drums, guitars or vocals. This means no swiping and no remembering what bank to select. Just go right to what you need."

Master Fader is loaded with a wide array of factory presets that are ideal for novice users and a great starting point for any professional, requiring little to no tweaking depending on the application. Users can also create their own custom presets, simplifying and minimizing setup when working with common and familiar sources. There's also the ability to share these presets via email or Dropbox, which is a powerful new tool for the Mackie mixing community. Plus, with frequent and simple App Store updates, Master Fader will get better over time with more features planned for the future.

"With the Mackie DL32R, you control everything from anywhere. You get the freedom to mix how you want, where you want and get results that truly benefit the audience," concludes Olswang.

Find out more at: Mackie