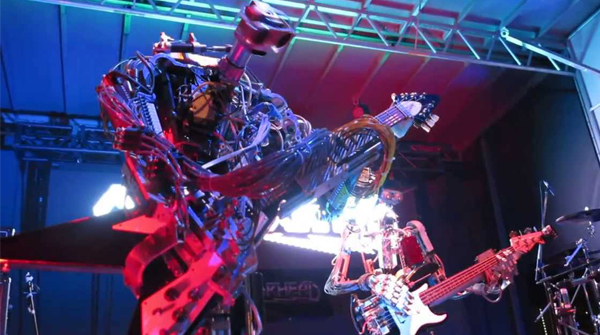 Compressorhead spilt opinion. On one side of the AI argument are the project's supporters praising the dexterity and progressive brilliance of the robotic three piece. On the other are the critics claiming the three, 5-foot-tall humanoids represent a worrying snapshot of the future, where artificially intelligence has all but taken over the human element.

Wherever you stand, there's no doubting Stickboy, Bones and Fingers (Compressorhead's members) cover of Black Sabbath's "Iron Man", a fitting song cover for an outfit made out of scrap metal, is as just impressive its covers of "Ace of Spades" and "Blitzkrieg Bop".

Compressorhead now also has its own web site featuring a countdown clock to their debut album which is due next week and is set include studio performances by the band members as they present new original songs by writer and musician, John Wright.