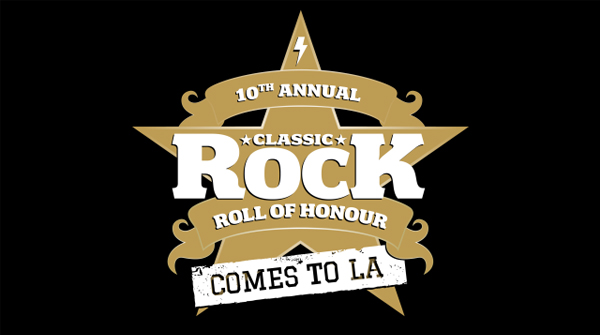 (PRESS RELEASE): Hosted by UK-based Classic Rock magazine, the 10th annual Classic Rock Awards--the Classic Rock Roll Of Honour presented by Orange Amplification--announced today a stellar line-up of live performances from some of the most exciting and respected artists in rock: Kings Of Chaos, California Breed, Rival Sons and Scott Weiland & The Wildabouts.

This star-studded list of performers will be joining an already announced list of rock icons to be on-hand at the all-star event on November 4 at the Avalon in Hollywood, CA including: Sammy Hagar (this year’s host), Gregg Allman (this year’s Living Legend Award recipient) and guitarist Robby Krieger and drummer John Densmore of The Doors (this year’s Inspiration Award recipient), and many more.

Kings Of Chaos, the part-time, all-star rock’n’roll collective, are one of the most exciting live bands in rock for two distinct reasons: 1. The a-list revolving door of guest performers; and 2. The bands core line-up of Guns N' Roses’ Duff McKagan, Matt Sorum and Gilby Clarke alongside guitar aficionado, Extreme’s Nuno Bettencourt. It's a combination that brings anticipation and killer live performances in abundance.

For this intimate live performance, Kings of Chaos will be joined on stage by Sammy Hagar, the evening's host and frontman of Van Halen, Montrose and Chickenfoot; former Deep Purple and current California Breed frontman Glenn Hughes; and more rock royalty, Def Leppard’s Joe Elliott and Phil Collen; and one of the most recognizable and important figures in rock, Billy Gibbons (ZZ Top).

As well as performing with the aforementioned Kings of Chaos, Glenn Hughes will also be playing a stripped-back set with his current band California Breed, with 23-year-old newcomer guitarist-singer-songwriter Andrew Watt.

Rival Sons have seen a meteoric rise in international recognition since their inception in 2009. Playing to thousands in sell-out shows around the world, this will be a unique performance in front of hundreds of their peers.

Classic Rock editor Siân Llewellyn says: "Playing live is the lifeblood of rock'n'roll and there are few things as thrilling as watching a rock show. On November 4th we'll be privileged to witness four unique performances from some of the very best in the business."

For one night only, Classic Rock magazine plays host to some of the world’s most renowned rock legends. This exclusive evening welcomes some 400 artists, industry figureheads and VIPs with a champagne reception and a three-course dinner, followed by the presentation of the awards themselves. The evening culminates with a live performance.

Reflecting the explosive growth of the Classic Rock brand, the event has grown from humble beginnings to become one of the rare ‘must-dos’ on the rock calendar. It has consistently attracted A-List guests, including Black Sabbath, Jimmy Page, Alice Cooper, Slash, Rush, ZZ Top, Jeff Beck, Brian May, The Who, Gene Simmons, Steven Tyler, Joe Perry, Rob Halford and Paul Stanley, among many others, as well as live performances from Jeff Beck with special guests, Lynyrd Skynyrd, Rival Sons and Zakk Wylde.

This really is the ultimate in rock‘n’roll awards, and as such will be broadcast in the U.S. on radio exclusively through KMG Networks, a division of Krantz Media Group, it’s national programming partner VH1 Radio, producer of On Tap with Nik Carter, VH1 Classic Rock Prep and VH1 Rock Prep, and KMG's advertising sales partner Adlarge Media. In the U.K. it will be broadcast on TeamRock Radio. Check out highlights from past Classic Rock Awards here: http://bit.ly/1qVqXoT.