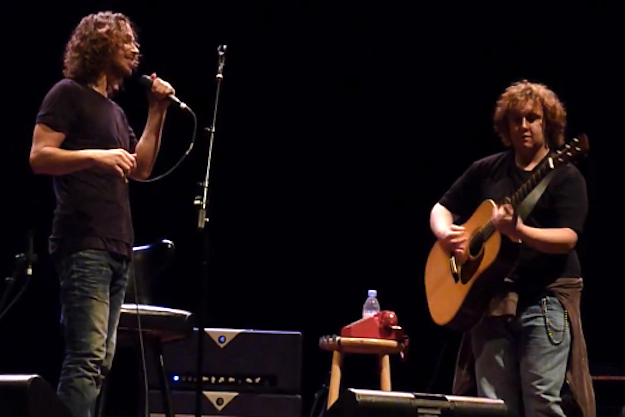 Chris Cornell made a fans' dream come true last week at hisNewcastle City Hall show. It's the moment that every guitaristdreams about, being welcomed onto the stage to perform alongsideone of your rock idols.

Cornell was in town as part of his solo tour, where he has beenplaying a set spanning his whole career including Soundgarden,Audioslave and his solo songs.

The recipient of the once-in-a-lifetime opportunity was BenDawson, who asked Cornell if he can play with him and proceeded torock 'Outshined' - a song you generally wouldn't think of as anacoustic jam. However, Dawson knocked the song out of the parkduring the five-minute, jealousy-inspiring performance. "Mostawesome moment of my life!" commented Dawson on GrungeReport.

Their impromptu collaboration impressed both the crowd andCornell, who shouted, "Let's make some noise for Ben! What apleasant surprise that was... I didn't expect that." Watch thevideo below.

Meanwhile, Cornell's latest work with Soundgarden is in thefinal stages of preparation and is expected to hit stores thisOctober. Revolver editor Brandon Geist recently heard a few tracksoff of the album and tweeted, "3 very heavy and rockin, one almostcould be AC/DC, 3 more mellow, expansive. Psychedelic touches:sitar, organ…"Later adding that the band is still deciding on asingle and mastering the other half of the album.