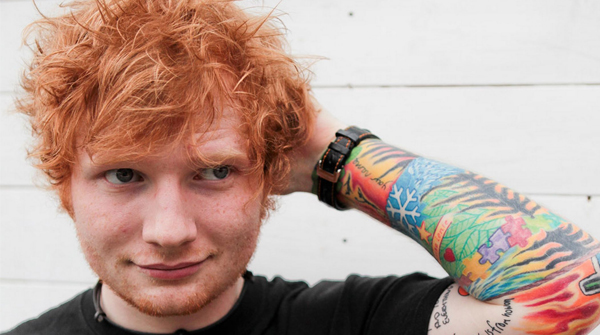 Multi-platinum singer-songwriter and Martin Guitar ambassador Ed Sheeran has teamed up for the second time with Martin to create the Ed Sheeran X Signature Edition guitar.

(PRESS RELEASE): C.F. Martin & Co. and multi-platinum singer-songwriter Ed Sheeran are teaming up for the second time to create another Signature Artist Edition guitar from the Martin Custom Shop, the Ed Sheeran X Signature Edition.  In 2013, Martin Guitar and Sheeran unveiled their first collaboration, the LX1E Ed Sheeran Signature Edition, which sold out everywhere.  The latest model will be available for pre-order starting February 17th. To find an Authorized Martin Dealer to pre-order the model, go to http://bit.ly/xpreorder.

Sheeran is once again donating 100% of his royalties from the sales of each guitar to East Anglia’s Children’s Hospices (www.each.org.uk), a UK-based charity in his hometown.  The organization, whose Royal Patron is The Duchess of Cambridge, supports families and cares for young people with life-threatening conditions and provides services across several UK counties, including Suffolk, where Sheeran was raised.

“It was a huge privilege working with the Martin team to create another Signature Edition guitar,” said Sheeran. “I’ve had the chance to bring the new model on the road with me already, and I’m excited that my fans will be able to purchase one of their own, with all the proceeds going to EACH, a charity very close to my heart.”

Designed in collaboration with the Grammy-nominated artist and brand ambassador, the Ed Sheeran X Signature Edition features his signature “x” (Multiply) sign on the headstock and down the fretboard. The six times platinum-selling album’s logo is inlayed in solid koa on a solid spruce wood top. The model comes stage-ready, equipped with Fishman Isys T electronics, SP Lifespan Martin strings and a padded gig bag.

“I take great pride in the relationship we have with Ed,” said Amani Duncan VP of Brand Marketing for C.F. Martin & Co. “He is not only an incredible talent but also an extremely compassionate human being.  Over 182 years, Martin Guitar has had the privilege of working alongside legendary Artists, and we are proud to be able to continue this long-standing tradition and musical journey with Ed Sheeran.”

“This is the second time Ed Sheeran has launched a Martin Guitar Signature Edition in aid of EACH and we’re absolutely delighted that he has once again chosen to support us through sales of this special guitar!” said Graham Butland, EACH Chief Executive. “The first guitar was a real success and raised a significant amount of money for the charity. We’d like to thank Ed, C.F. Martin & Co, and absolutely everyone involved in the project. Ed has been an Ambassador for the charity for almost a year and has shown us tremendous support in that time, donating clothes for online auctions and paying a visit to our Treehouse hospice in Ipswich. Not only will the guitar raise much-needed funds for the charity, but will also greatly raise the profile of EACH and the vital care and support we provide to life-threatened children, young people and their families.”