Bruce Springsteen Performs with The Who in New York 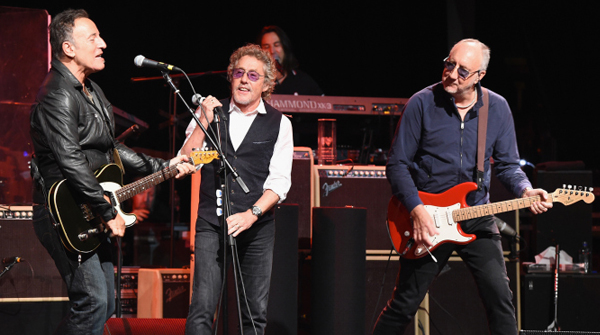 The "Boss" joined the mod-icons for their signature track, "My Generation" and also performed "Won't Get Fooled Again" alongside Billy Idol and Willie Nile. Earlier that evening both Idol and Joan Jett covered two tracks from the Who's catalogue.

The event was raising money for the MAP Fund, which provides members of the music community access to help despite their financial situation.

Asides from his surprise duet with him, Springsteen also delivered a tribute speech to Townshend as the veteran frontman was awarded for his dedication and commitment to helping others through the recovery process.

(via Hennemusic): "I wouldn't be wind milling a Fender Telecaster if it weren't for Pete Townshend" said Springsteen during the opening of his speech while referring to his first experience watching The Who.

"Pete is the greatest rhythm guitarist if all time. He plays such incredible rhythm and he showed you don't have to play any lead. It's an amazing thing to behold, really. Pete managed to take the dirty business of rock and roll and somehow make it spiritual and turn it into a quest.

He identified the place where it was noble and he wasn't afraid to go there. I took a lot of that with me as the years passed by. So Pete, I'm here to say, congratulations, well deserved and thanks for not just "Who's Next" and for "Who Are you, bur for who I am."