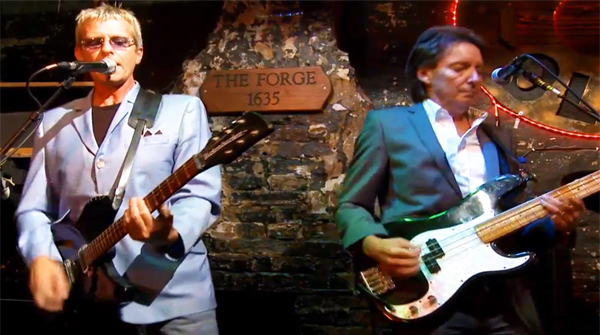 Bruce Foxton (The Jam/From TheJam/Stiff Little Fingers) is back with his first full soloalbum in nearly 30 years. The new record, entitled 'Back InThe Room' will be released on Oct.1 2012.

'Back In The Room', which has been funded by PledgeMusic, featuresRussell Hastings and BigCountry drummer Mark Brzezicki.But they're not the only Jam members joining Foxton on his newrecord as the Modfather himself, PaulWeller makes a cameo appearance on three of thesongs.  Other guest musicians include SteveCropper (Booker T & theMG's/The Blues Brothers) andSpandau Ballet's SteveNorman.

Commenting on working again with PaulWeller and having SteveCropper guesting Bruce said:

"It was such a pleasure to work and hang out with Paul again.What an honour to have both Paul and Steve play on thealbum."

As earlier mentioned the project has been funded by PledgeMusic,a revolutionary online service where fans can pre-order or 'pledge'not only for a signed copy of the album but for a range ofnever-before seen items and experiences. These include a VIP passto an exclusive album launch party and a round of golf with Bruceand Russell Hastings!

"As well as being a key member of legendary band The Jam,Bruce has forged a very strong solo career over the years and thisnew campaign is a great way for him to connect with his fans and avery effective way for him to get his fantastic new album out intothe market." Bruce added: "This is such a good way for me to workclosely with all the people who support my music and to make them areal part of the whole creative process."

A percentage of the proceeds from the PledgeMusic campaign willbe donated to the Shooting Stars CHASEcharity, to help them continue their valuable work supportingfamilies in west London , Surrey and West Sussex , caring for localfamilies with a child or teenager with a life-limiting condition.See www.shootingstarchase.org.uk for more details.