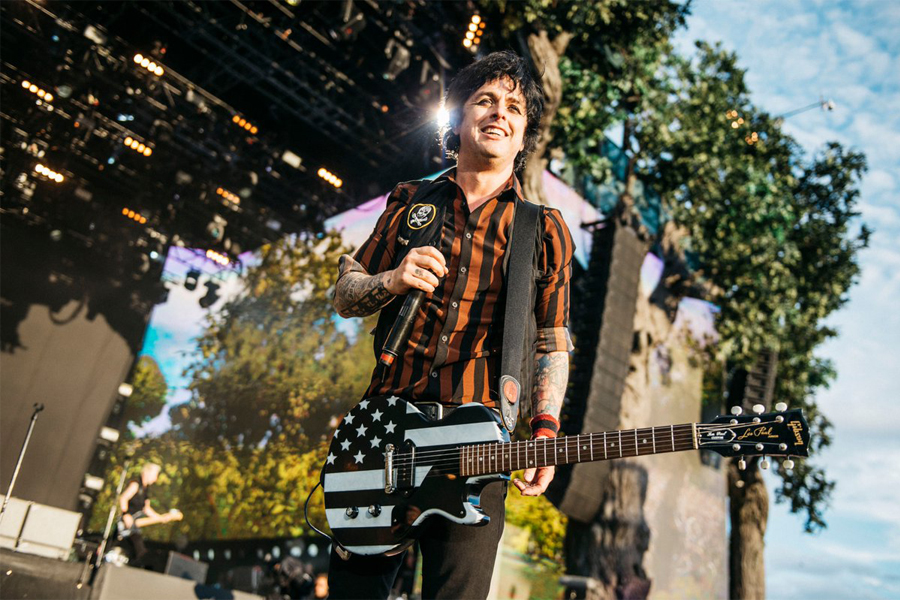 Day Two at Barclaycard presents British Summer Time Hyde Park has been THE rock show of the summer. Headlined by the legendary Green Day, the sold out show was rammed with punk legends and the hottest new rock bands alike.

Green Day stormed onto the Great Oak Stage to the raucous cheer from 65,000 fans. The Californian trio, made up of frontman Billie Joe Armstrong, guitarist Mike Dirnt and fluorescent-haired drummer Tré Cool, opened with their thunderous hit “Know Your Enemy”. Billie Joe then handpicked a mega fan from the crowd to lead on vocals and stage dive into the audience.

Crowds screamed along to new hit “Revolution Radio” and the iconic “Boulevard of Broken Dreams”, as frontman Billie Joe unfurled a British flag.  He brought a second fan, Stella, on to the stage to jam along to old school hit “Longview” on his own guitar. After nailing the riff, he gave the overwhelmed fan the priceless guitar to keep.

Green Day treated fans to a medley of “Always Look On The Bright Side Of Life” and The Beatles’ “Let It Be” and “Hey Jude”. During “King For A Day”, the band paid tribute to George Michael as the saxophonist Jason Freese played “Careless Whisper”. Looking over the crowds of Hyde Park, Billie Joe said, “I don’t need any politicians telling me what to think. When I see people singing and dancing together, this is proof. This is the human experience. We come here tonight; we sing together... drink together. This is about freedom.”

The trio then burst into a rendition of “Teenage Kicks”, originally by fellow punk rockers The Undertones, followed by “I’m Still Breathing” from their latest album Revolution Radio. And just when fans thought the night was sadly over, Green Day returned for an encore of their biggest hits “American Idiot”, “Jesus of Suburbia” and “21 Guns”, before closing the set with “Good Riddance (Time Of Your Life)”.

Before the headlining show, 1980s punk veterans Rancid brought a slice of chaos to the festival. Fresh off the back of their UK and European dates on Green Day’s Revolution Radio tour, they drove fans wild with songs old and new, including “Track Fast” from their latest album Trouble Maker.

Hyde Park welcomed the classic punk rock attitude of The Damned and Swedish rockers The Hives. They took to the stage to rapturous applause, before belting out classic hits such as “Tick Tick Boom” and “Hate to Say I Told You So”, whilst lead singer  ‘Howlin’ Pelle’ hurled himself into the crowd.

Meanwhile on the Barclaycard Stage, seminal rockers The Stranglers got the crowds pumped up under the summer sun, whilst fans flocked over to the Summer Stage in droves to watch Beach Slang, Sunflower Beam and Hey Charlie.