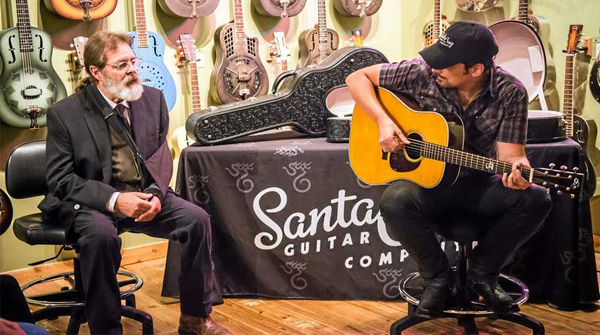 The pair were introduced by Hoover's best friend and dealer, Bill Warmouth of Artisan Guitars, after the Santa Cruz Guitar Co. founder suggested the pair worked on a new Paisley inspired design together.

The Brad Paisley Signature Guitar model’s body is made of East Indian rosewood and its top is made of bearclaw sitka spruce. All of the Santa Cruz Guitar Co. instruments are constructed from reclaimed wood, whether the source is a downed tree, log, post-Christmas evergreen or old building beam.

Average time for a customer to receive a handmade guitar after placing an order is four months, although it can take longer. So far, the record is 2.5 years for the company’s 30th anniversary model.

“Maybe some very cool people will show up,” says Hoover.