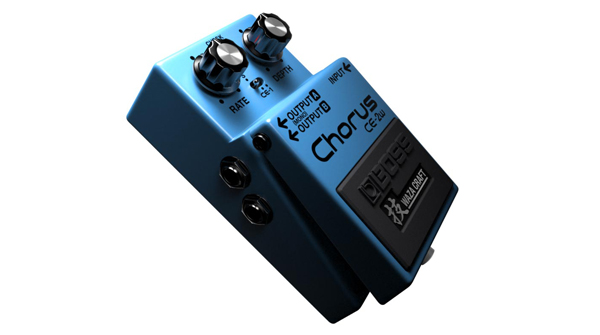 The new Waza Craft CE-2W Chorus is a premium analog pedal made exclusively in Japan to proudly honor the 40th anniversary of BOSS effects. Introduced in 1976, the CE-1 Chorus Ensemble was not only the first BOSS effects pedal, but also the world’s first chorus effect in pedal form. Three years later, the CE-2 Chorus brought this original BOSS effect to the iconic compact pedal lineup, where it’s been represented ever since. Celebrating 40 years of BOSS innovation and craftsmanship, the Waza Craft CE-2W brings the sounds of these legendary pedals together in one stompbox with enhanced features.

In 1975, BOSS’s parent company Roland pioneered the “Dimensional Space Chorus” effect in the famous JC-120 Jazz Chorus amplifier. With the stereo CE-1 pedal, players could achieve the spacious, shimmering chorus sound of the Jazz Chorus with any amplifier setup. The mono CE-2 provided a variation of the CE-1’s chorus effect in a smaller, battery-powered stompbox.

Using premium analog components and BBD circuitry, the Waza Craft CE-2W brings these BOSS classics to today’s players. Standard mode completely reproduces the original CE-2 sound, which can now be further enhanced with the CE-2W’s stereo output capability. CE-1 mode includes both chorus and vibrato, authentically reproducing the original’s distinctive sounds. Rate and depth knobs provide effects adjustment in both modes. In CE-1 mode, these controls offer more sound variation than the original pedal, which was not equipped with a depth control.