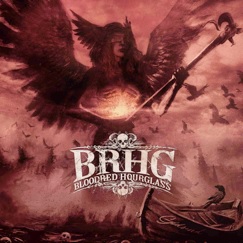 Bloodred Hourglass are thrilled to announce the global release of their 4th studio album ”Godsend” on June 28th 2019, via Out On Line Music. “Godsend” is a ten-tracks relentless melodic death metal record, in perfect Finnish tradition: fast and hard-hitting, whilst creating an almost epic soundscape.

Currently putting finishing touched to the record, the band promises to raise the bar even higher this year, delivering high quality metal to all their fans. The band comments: ”Godsend is so far the best version of Bloodred Hourglass. This album will modernize our sound and the output on the record will be somewhat fresh and varied compared to previous releases. Expect an album with full of harsh attacking melodic metal!“

“Godsend” was recorded by Juho Räihä (Soundspiral Audio), who is also the man behind the previous releases. The album mixing and mastering was done by Henrik Udd (Henrik Udd Recording), who is famous for working with the likes of Architects and Bring Me The Horizon. The album artwork was designed by Tuomas Koivurinne, in cooperation with Miika Saari.

Last year, Bloodred Hourglass visited several different festivals outside Finnish borders and returned to Europe in March-April for a full-length tour with Swedish metallers Evergrey. Additionally, in May the band will be performing in Japan for the first time. Going international doesn’t mean BRHG would forget their home country: during spring and summer the band will perform in various Finnish events and festivals.

About Bloodred Hourglass
Five guys, one vision. Bringing together the sound of modern and old school melodic metal. It’s all about the songs, which are filled with enough twists and variation, but never too far from enjoyable listening. Inspired mainly by metal sound, but never disregarding the influences from various other musical genres. The sound of Finnish quintet, Bloodred Hourglass.
It’s been since 2005, from Finland, mainly because being really good friends. What is there to add really when you start with your heart? This already took it worldwide. Especially well known for their relentless live performances, this band has established their own signature sound and slowly climbed their way towards the top of the metal genre.
Melody. Aggression. Energy. Harsh vocals doubled with cleaner ones. Firmly grounded in the here and now, the band’s lyrical themes are focused on the individual’s experience of everyday life, as well as environmental issues.
This is Bloodred Hourglass! This is the heart of the modern melodic death metal.