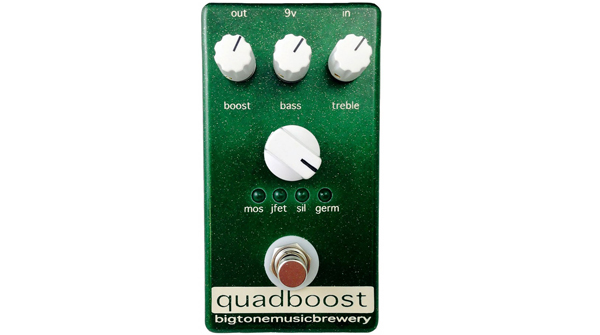 Big Tone Music Brewery has released the Quadboost, a pedal that combines four of the most popular boost circuits into a single stompbox. Building upon the company’s Triboost, the Quadboost has germanium, silicon, MOSFET, and JFET boosts with a 2-band EQ to create sculpted boosts.

The germanium boost is based on the Dallas Rangemaster Treble Booster and features a new-old-stock European-made Germanium transistor for a bit of grit. The silicon transistor boost is described as punchy, similar to the Electro Harmonix LPB-1, while excelling at boosting lower frequencies. The “ultra-clean” JFET boost is based on the Keeley Katana, while the MOSFET boost is a take on Zvex’s Super Hard On.

The pedal’s 2-band Baxandall EQ lets you turn the effects into a treble boost, a bass boost, or even a mid boost, which is created by turning the treble and bass knobs down. Leaving the controls at noon creates a linear boost. The pedal has an internal 18-volt charge pump to supply the EQ circuit and JFET circuit with higher voltage for increased headroom and output. The Quadboost runs on a 9-volt power supply or battery.