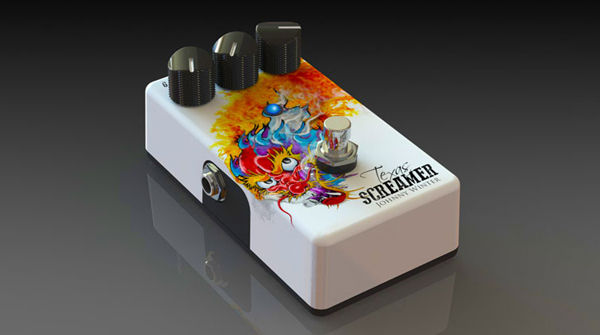 The story of the new Texas Screamer began a few years back when Johnny Winter started on the road to recovering his health and recapturing the tone that propelled him to legendary guitar status. Living locally to the factory, Johnny came to the Big Joe Stomp Box Company looking for a pedal that could give him that singing tone with punch and crunch that become the signature rockin’ blues tone that Johnny was famous for.

Johnny listened to more than 30 different pedals and prototypes before finalizing the Texas Screamer, which represented his sound better than anything ever manufactured previously. Johnny articulated, “I cannot believe how this pedal recreates my tone through any amp I play through!”

Johnny's Guitarist/Producer and closest friend, Paul Nelson recounted, “Johnny went through a plethora of pedals before choosing this prototype from Big Joe. It’s a shame he cannot be here to see the realization of this dream. Johnny not only picked out the sound, but he also picked out the product graphic- the dragon tattoo he had on his chest. He approved the final version and was looking forward to having it introduced at NAMM."

The new Texas Screamer pedal gives guitar players that perfect sound when they need it. Many guitarists want to be able to have that sound in an uncomplicated way. With just 3 basic knobs, Gain, Tone and Output it is easy to get a great vintage juicy rock tone.

The pedal runs on 9v batteries or a line-in power supply. The Texas Screamer is 100% analog with true bypass circuitry and will debut at the 2015 NAMM show in Anaheim, California in January. The Texas Screamer will be available in music retailers across the country by February 2015.