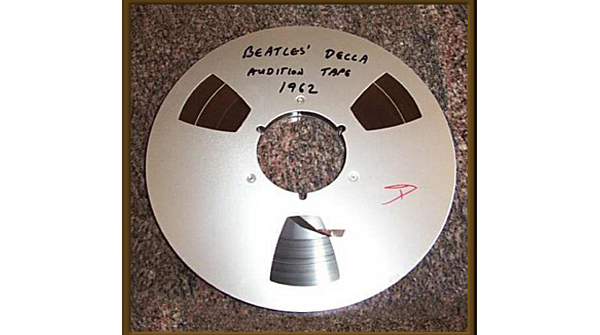 The Beatles' Decca Records Demo Tape up for Auction -

An early Beatles tape featuring ten of the fifteen tracks demoed by the Fab Four to Decca Records will be auctioned on Tuesday (27th Nov), reports Classic Rock Magazine.

The audition tape includes covers and a few original tracks handpicked by the bands manager Brian Epstein. However, Decca rejected the demo telling the band "Guitar groups are on the way out."

The recording is one of two recorded on January 1st 1962 by John Lennon, Paul McCartney, George Harrison and Pete Best, who travelled  from London to Liverpool in their van to record the previous night.

The tape comes complete with a handwritten note along with a negative photo which as intended to be used on the cover if Decca had have taken them on and turn the recordings into an album.

Ted Owen of Fame Bureau, who will run the auction in London, tells the Telegraph:

"It is totally unique and the sound quality is crystal-clear.

"They're copying the American style, the style of artists like Buddy Holly and Chuck Berry. Everybody who was trying to make a name for themselves was trying to replicate that style.