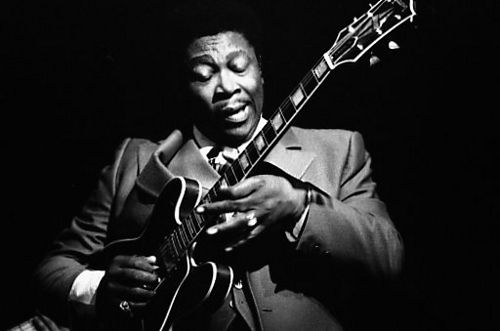 The blues guitar legend that is BB King has died, he was aged 89.

Born and raised in Mississippi, as a youngster BB sang in the youth gospel at Elkhorn Baptist Church before first picking up the guitar at the age of 12.

Considered by many to be the greatest of all time, King released over 40 albums throughout his blues career and was rewarded with various industry accolades and GRAMMY awards.

King's compositions defined  modern electric blues in the 1950's and his fusion of jazz and blues styles on his beloved Gibson ES-355 saw him inducted into both the Blues Foundation Hall of Fame and the Rock and Roll Hall of Fame.

At a time when racism was still rife in the Southern US states, BB played exclusively to black audiences in the early part of his career. However, his masterful vibrato playing soon began to influence a new generation of rock and blues guitarists, including Eric Clapton, Mike Bloomfield and Stevie Ray Vaughan who helped introduce him to a new generation of "white" fans in the late '60s.

BB quickly began to be invited to play at venues that had long been off limits to black musicians. Possibly the most poignant performance of his early career came when he received a standing ovation from a predominantly white middle class audience at the Fillmore West theatre in San Francisco in 1968.

The same year, he made his first tour of Europe at a time when bands such as Rolling Stones and the Yardbirds were introducing UK audiences to the blues.

BB had his first UK top 20 hit in '69 with The Thrill is Gone. However, his most successful single came with U2 in 1989 with "When Love Comes To Town".

In 2000 he collaborated with long-time fan, and blues purist, Eric Clapton on the album "Riding with the King".