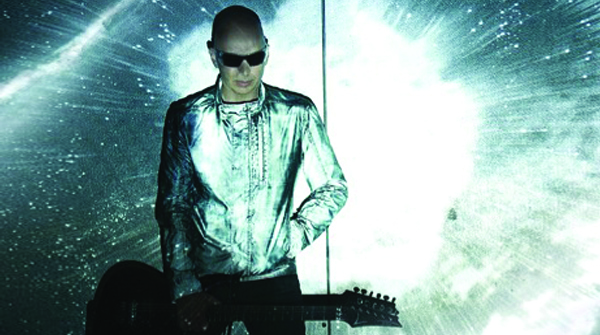 The event will focus on Satriani’s new album Shockwave Supernova, and much more, and will take place Friday, July 24, 2015 (the album launch date) at the AOL Studios in New York City.

Hosted by legendary music journalist Brad Tolinski, the event will allow guests to enjoy a seat at an exclusive, career-spanning live interview, a meet-and-greet with Satriani, an autographed copy of Shockwave Supernova, plus complimentary beverages. Satriani will be interviewed one-on-one by Tolinski as they discuss the new album and much more. Tickets are available at www.backstoryevents.com.

The album sees Satriani once again joining forces with co-producer and engineer John Cuniberti. Satch and Cuniberti share production on Shockwave Supernova, as they have on numerous albums, including 1986’s Not of This Earth and its legendary followup, Surfing with the Alien. Satriani assembled a trio of world-class musicians for the project—keyboardist and guitarist Mike Keneally, drummer Marco Minnemann and bassist Bryan Beller. More info and pre-orders at www.satriani.com.

BackStory Events kicked off in mid-June with guitar and production mastermind Nile Rodgers, who discussed his two-day, all-star event, FreakOut! Let’s Dance Festival. Upcoming guests include world-renowned producer Timbaland as he launches his new autobiography, The Greatest; among others to be announced soon.

The live interview series is produced by Tolinski and partners. Best known as the editor-in-chief of Guitar World Magazine for 25 years, Tolinski is a respected journalist and the author of Light and Shade: Conversations with Jimmy Page. Throughout his career, Tolinski has skillfully interviewed hundreds of musicians and plays guitar, violin and mandolin himself.

To find out more or purchase tickets to BackStory events, go to www.backstoryevents.com.