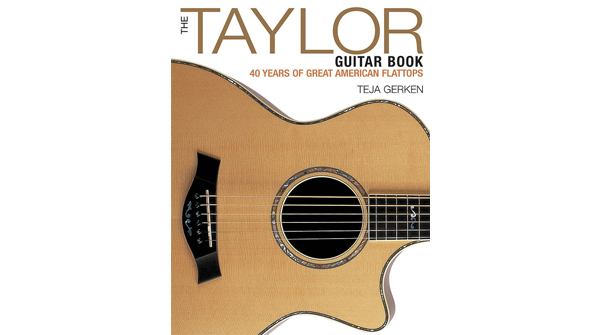 (PRESS RELEASE): The latest Backbeat Books release, The Taylor Guitar Book, tells the complete story of one of the most important guitar manufacturers in the history of the instrument.

From its beginnings as one of the first modern small-shop steel-string guitar brands in North America to its position as an undisputed market leader, the Taylor company provides a unique tale of innovation and entrepreneurship.

Famous for the easy playability of its guitars, Taylor not only successfully introduced non-traditional design elements (such as bolt-on necks) to the instruments, but also pioneered high-tech manufacturing techniques, including the use of computer-controlled CNC machinery, laser cutting, and modern finishes. In the process, the company influenced virtually every other maker of guitars during the last 40 years. Taylor has set new standards in consistency and quality control, even building its own cases and electronics.

Taylor guitars are played by artist as diverse as Neil Young, Prince, Leo Kottke, Jason Mraz, Zac Brown, Taylor Swift, and Lindsey Buckingham, and the company has manufacturing facilities in the USA and Mexico. Now in its fifth decade, Taylor continues to innovate with hits most recent effort focused on environmentally friendly manufacturing and the use of sustainable woods

The Taylor Guitar Book is full of photos repenting Taylor's entire history alongside a narrative of the company's path to success, a detailed reference listing of current and past models and fresh insights from key members of the Taylor team.

Founded in 1974, Growing from a small custom shop to the only new brand to have challenged the traditional Big Three of American acoustic guitars (Gibson, Guild, and Martin), Taylor has effectively changed the marketplace for acoustic steel-string guitars and influenced every other maker of acoustic stringed instruments.