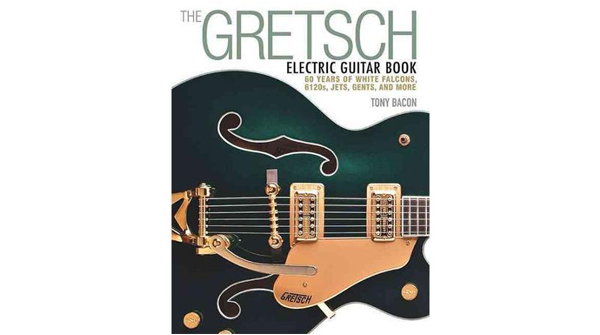 Gretsch electric guitars have a style all their own - a glitzy, wacky, retro charm that over the years has drawn players from unknown teens to timeless stars playing all kinds of popular music. No two old Gretsch guitars sound or feel alike: inconsistent crazy gadgetry - cool beauty - weird tone - stylish glamour.

The Gretsch Electric Guitar Book is an absorbing tale that takes the reader from the introduction of Gretsch's first proper electrics, through to the famous Chet Atkins models and the White Falcon, and on to the recent guitars and the Fender era. Tony Bacon draws both from fresh and archived interviews with Gretsch players.

"Gretsch put together a prototype to show to Atkins, probably early in 1954. In a similar way to Les Paul and Gibson, Atkins had little input to the original design of his signature model. The label inside identified the sample guitar as a Streamliner Special, although it was more like a Country Club: it had a Melita bridge, a second DeArmond single-coil at the bridge, and Gretsch's two-pickup control layout (four knobs plus one selctro). 'That's the first one I received,' Atkins explained when he showed it to me in the 90s. 'They sent it over and said: how about this? But I wanted a Bigsby vibrato on it and I especially didn't like the f-holes, and later on we changed those.'"

The book tells the story through the people who design, make, and sell them - back then as well as right now. The book closes with a useful reference section with all the information a collector might want on original models, reissues, new guitars, artist models, serial number, and production details for every significant model, new and old, of this most enigmatic and revered brand.