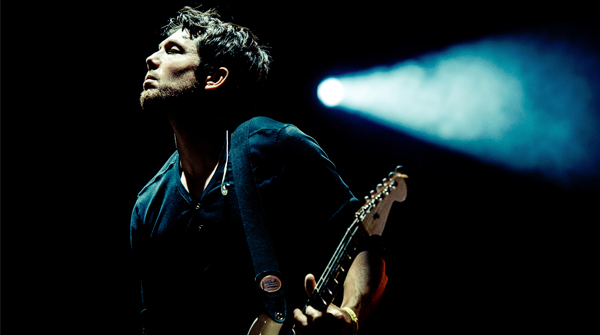 (PRESS RELEASE): Award-winning blues-rock guitarist Aynsley Lister has announced that his eighth studio album “Eyes Wide Open” will be released on Friday 7th October 2016 on Straight Talkin’ Records. “Eyes Wide Open” is Aynsley’s magnum opus, which sees him confidently pursuing his own musical path. Self-assured, inventive and richly-textured, Aynsley brings his 18 years of hard touring, 11 album releases (eight studio and three live) and all his experience as a musician to fruition on “Eyes Wide Open”.

Aynsley’s previous opus, 2013’s Home garnered the guitar ace both Songwriter of the Year and Song of the Year at the British Blues Awards. “Eyes Wide Open” is a bold, confident and accessible slice of contemporary blues-rock that promises to bring Aynsley yet more accolades as well as introduce his genre-blending sound to a new audience, building on the 100,000 albums he’s already sold worldwide.  The new album dovetails Lister’s UK and European tour which kicks off on September 22nd in Chislehurst.  Click here for more album and tour date details.

The 39-year-old British guitarist says that this raw, energetic album is a return to his roots; a record that at its heart boasts all the grit of traditional blues. “I wanted to keep the raw edginess and energy of a band,” says Aynsley. “So that meant minimal takes and going with the ones that had the most spirit and passion over those with technical perfection. To me, music isn’t supposed to be perfect. It’s supposed to grab you and move you both emotionally and physically; it’s supposed to connect with you.”

When Joe Bonamassasa was interviewed by the Nottingham Evening Post newspaper whilst on tour in the UK in October 2015, the paper asked the blues guitarist who his favourite British blues guitarists were.

“There is a great little crop of blues musicians out there over in the UK right now,” answered Bonamassa.

“There is an Irish kid called Simon McBride who is very good, Joanne Shaw Taylor is a superstar in waiting, and I think and Aynsley Lister is also very good.”