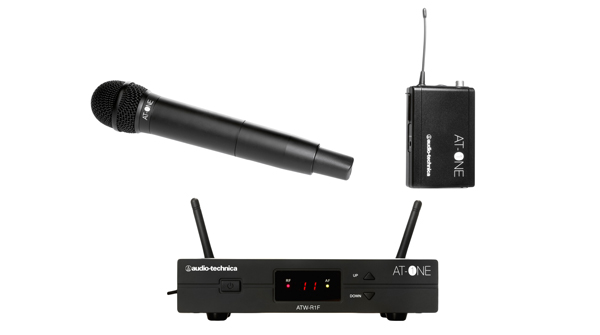 (PRESS RELEASE): Audio-Technica has announced the launch of its new installation-friendly affordable UHF wireless system, the AT-One. Designed with simplicity and ease-of-use in mind, the AT-One provides an ideal solution for installers, performers and presenters seeking a fuss-free wireless set-up.

The AT-One’s frequency plan is divided into two groups, with four available channels in each group split between the Europe-wide license-free frequency range and the LTE duplex gap. Users can choose up to four channels from one group. This arrangement allows installers to run two four-channel AT-One systems (using separate groups) in close proximity without the fear of interference, for example.

Despite its flexibility, the AT-One’s simple interface ensures an undaunting prospect for users of all levels of expertise. But it doesn’t skimp in terms of stylish robust build quality and included accessories – the AT-One ships with a carrying case, rack-mount kit and detachable antenna.

Available in three configurations, AT-One can be purchased with a beltpack or handheld transmitter, or with beltpack and ATR35cW lavalier microphone.

The ATW-11F comes equipped with a sturdy, discreetly designed beltpack, providing 10mW RF output power, damping switch and a battery life of up to 10 hours.

The ATW-13F’s condenser handheld microphone’s capsule prevents the possibility of feedback when used in venues with induction loops installed.

AT-One will be available from early November 2015.