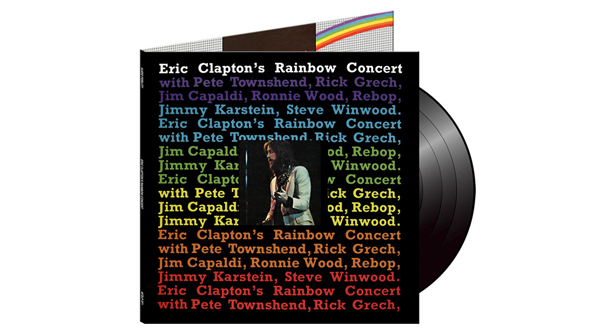 Other than one appearance in August 1971 at George Harrison's Concert for Bangladesh, Eric Clapton had not been heard from until Pete Townshend coaxed him to headline a concert appearance. The show was scheduled for January 13, 1973 at London's Rainbow Theatre. An all-star band was assembled for the show and in addition to Townshend the other English rock luminaries included Clapton's old Blind Faith pals, Steve Winwood and Rick Grech, Winwood's Traffic mate Jim Capaldi, Ron Wood, Jimmy Karstein and Rebop Kwaku Baah. It was an ensemble effort but the show demonstrated that the reclusive Clapton, nursing a heroin addiction, could still play, and that was welcome news.

If the classic Derek and the Dominos' "In Concert" album shows Clapton on the upswing, then "Rainbow Concert" explores the lower reaches of his psyche. The Rainbow performance was his attempt at starting all over again and coming out of isolation to return to his music. Upon listening to Rainbow Concert it becomes clear just how much the concert helped to re-energize him. The concert at London's Rainbow Theatre stands as the beginning of Eric Clapton's return to the stage.

"Rainbow Concert" is a recording of monolithic melancholy, the music is rich in its make-up and sad in tone. Townshend's and Wood's guitars and Winwood's organ surround Clapton in a protective aural capsule, but he cuts loose as much as his setting allows in "Badge," and he's solid for most of the show.  The album's excitement comes from the layered instrumental textures, the solemn measured movement into climaxes that are majestic if not explosive, and the nuances of Clapton's restrained playing and singing in a suitably course and bluesy voice.

In addition to "Badge," written by Clapton and George Harrison and covers such as J.J. Cale's "After Midnight" and a very soulful rendition of Jimi Hendrix's "Little Wing," Steve Winwood steps back as lead vocalist in Eric Clapton's favor for Blind Faith's "Presence of the Lord" and Traffic's "Pearly Queen."