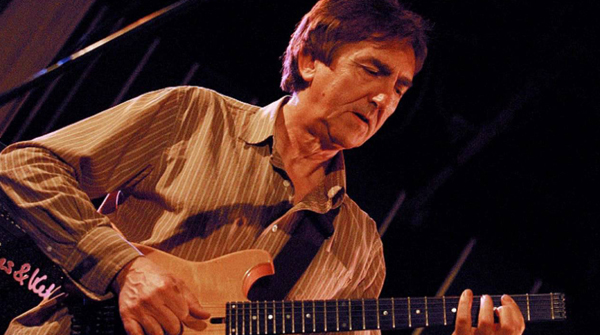 MoonJune Music in association with John McCracken Music Group and with the great support from PledgeMusic is thrilled to announce a new campaign with guitar legend Allan Holdsworth for Tales From The Vault, a collection of unreleased songs from Allan’s own private collection, written and recorded over the past 15 years,  featuring various musicians with whom Allan has performed in the past one and a half decade: bassists Jimmy Johnson, Jimmy Haslip, Ernest Tibbs, Anthony Crawford, Bunny Brunel, and drummers Chad Wackerman, Gary Husband, Joel Taylor and Virgil Donati.  Fans have been waiting for over 14 years for new studio recordings from Allan and Allan has now chosen to release these through an extensive Pledge Music Campaign beginning February 24, 2015.  The wait is finally over!

Allan Holdsworth has long been recognized worldwide by music fans and world class musicians alike as one the greatest guitar players ever. His “legato” style playing, unearthly chord voicings and his use of the Synthaxe have inspired and influenced many of the most significant guitar players of the last 40 years including Eddie Van Halen, John Frusciante, Steve Vai, Alex LIfeson, Pat Metheny, Frank Zappa, John Petrucci, Joe Satriani and many, many more.

The California-based English-born composer and guitarist whose music has spanned multiple genres over more than four decades, continues to reinvent and redefine the guitar and continues in his tradition of playing with the very best instrumentalists in the jazz and progressive rock idioms. Fans will not be disappointed with this new collection of music that can only be described as “mind blowing”.

In exchange for pledging, pledgers will receive digital downloads of Tales From The Vault as they are released over the next 6 to 8 months, signed AH signature HH2 Carvin guitars, behind the scenes video of his recording process, Allan’s technical specs for each release along with selected AH merchandise only available through the campaign.

To view more details on the campaign visit here: www.pledgemusic.com/projects/allanholdsworth