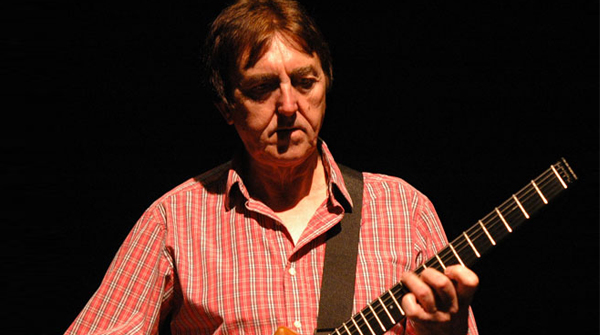 (PRESS RELEASE): Tales from the Vault is a series of single bi-monthly releases from Allan Holdsworth digging into his vault of recorded material that has never been released or heard before. It spans many different trios and quartets (including Ernest Tibbs, Chad Wackerman, Jimmy Johnson, Gary Husband, Jimmy Haslip, Virgil Donati, Austin Peralta, Joel Taylor) recorded between 2000-2012. This campaign enables Allan to finish these tracks with new solos, track tweaks and mixing. Tracks are ONLY released via PledgeMusic and you must pledge to receive them. Available in 320kbs MP3, FLAC via download from Allan's PledgeMusic page and high res 96k24bit format via special download link.

$15 basic pledge level gets you digital tracks from Tales from the Vault (FLAC, MP3, WAV).

“Earth” was the first released track of this campaign (released August 22nd) and is now available to all pledgers who already pledged, And for those who didn't pledge yet, now is time to pledge, to support Allan Holdworth and to hear his amazing nw music, the first new recorded music in almost 15 years. “Earth” is composed by Virgil Donati (drums), arranged by Allan and features Jimmy Johnson on bass with Allan on guitars and synthaxe. It’s a stunning 10 minute track with virtuoso performances by Virgil, Jimmy and Allan…a trio that has never recorded or played together before and now released for the first time.

Once Allan has finished at least 6 tracks and released them as “singles" to pledgers there will be a special booklet for Tales from the Vault. The booklet will have 12-16 full color pages and will be available via download in high res PDF once the entire Tales is completed as well as a limited version of the booklet in printed form on glossy high quality stock available ONLY to Pledgers who paid to have their names included in the booklet. This booklet is NOT part of any cd package.  An updated version of the booklet will be available for a limited edition of Tales on CD and LP should Allan decide to release a physical version of Tales. This decision will be made in early 2016. The booklet will include in-depth recording notes from Allan, special rare photos and other bonus items for pledgers only.

For more information on PledgeMusic/Allan Holdsworth