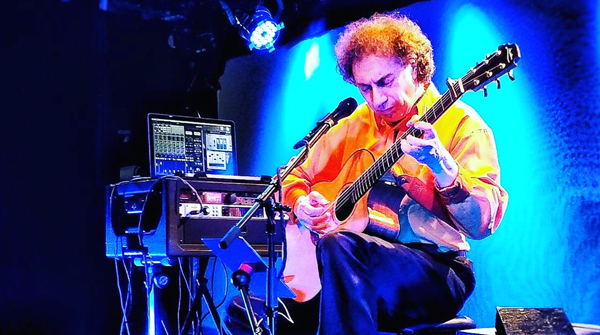 Over the past 40+ years, French-Algerian fingerstyle acoustic guitar virtuoso Pierre Bensusan has taken his unique blend of world, Celtic, jazz, Arabic and folk-inspired music to all corners of the globe. On Sunday, October 30 he kicks off his UK / Ireland Fall Tour celebrating his birthday with a concert in in London, winding his way through England and Scotland then capping it off in Galway, Ireland.

Winner of the 2014 The Independent Music Awards in the Live Performance Album category for his triple live album "Encore", Bensusan is recognized as one of the great guitar players of the 21st century. Described as a ‘genius’ by the likes of Jon Gomm and Melody Maker, immortalized by the tune ‘Bensusan’ written in tribute by the late Michael Hedges, and referenced as an important inspiration to many other great musicians, Pierre Bensusan is a one-of-a-kind artist whose music transcends genre and time. At the Ards International Guitar Festival (Northern Ireland), Bensusan was presented the festival's "Lifetime Achievement Award".  He is in good company with previous winners including Martin Taylor, Martin Simpson, John Renbourn and Davey Graham.