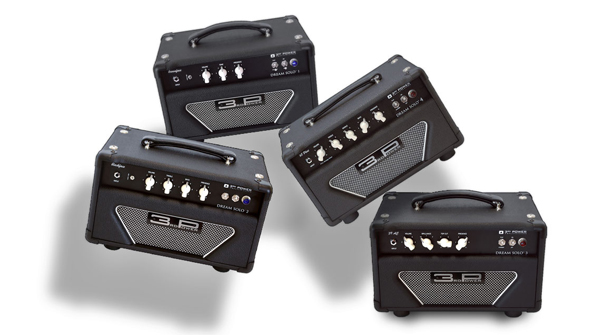 Nashville-based 3rd Power Amps has news for users of its popular Dream Solo Amp regarding circuitry enhancement and new pricing structure as well as a few words from industry veteran and company founder, Jamie Scott.

Product changes include new features and optimized tone. Each model has been refined even further for more tone and greater touch sensitivity.

“After creating the Dream Weaver, our most popular amplifier to date, I wanted to see how far I could push the Dream Solos,” says Jamie Scott, 3rd Power designer and CEO. “Most of the time, a manufacturer is not supposed to "look backward" at past product. In this case, after everything I learned during the two-year development of the Dream Weaver, I knew I could go back in and infuse the Dream Solos with even more magic. I couldn't be happier with how they turned out.”

“Every single model gives it's big brother/sister amps such as the British Dream, American Dream and Dream Weaver a serious run for their money but in a convenient size/power package that will really appeal to many of today's guitarists. I'm convinced that when working guitarists take a closer look at what the Dream Solos have to offer (and any of our other creations) they will find something that really inspires them.”

The DS1 and DS2 really pack some tone for guitarists wanting a better, more responsive sounding Deluxe-style amp. This is due to the inclusion of a '63 blonde bassman inspired phase inverter circuit, just like the Dream Weaver, allowing the amp to breath more. Clean tones are punchier with more headroom and the amps overdrive in a very musical way.

The big new feature for models 3 and 4 is the inclusion of HybridMASTER-PLUS volume management. You can go from ~18 watts down to ~3.5 watts before you engage the HybridMASTER knob for fine tuning your levels. These amps can rock without disturbing your neighbor.

Sonically, the DS3 and DS4 have been enhanced to do an even better job at recreating the magic of their British heroes. The chime and growl from the DS3 rivals that of a Vox flavored EL84 amp but with a girth and headroom that makes it more versatile and pedal friendly. Crisp "top-boost" style tones are on tap as is the coveted EF86 tone of the '58 AC15 via the rotary 3-position brilliance switch. With the DS4, the "kerrang" of a hot power chord rips through in a way that says ‘late 1960’s super lead plexi’ without the excess volume.

There have been no changes to the method of construction or materials. As with all 3rd Power amplifiers, we source only the finest components from USA suppliers and assemble our amps by hand featuring point-to-point turret boards at our factory in Nashville, TN.