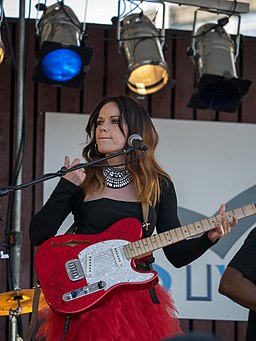 Following the release of her new single “Another World”, European Blues Award winner Erja Lyytinen kicks off on her November 2018 UK Tour at London’s Borderline on Tuesday November 6. Tickets are available via www.erjalyytinen.com/tour.

The tour will see Erja playing fan favourites as well as new material including the singles “Another World” and “Without You” taken from her new album to be released in 2019.

Erja about “Another World” – “The song has a lot of meanings. It’s a love story. It´s a dream about loving somebody in another dimension, because it´s not possible in this world. I have always loved sci-fi movies, so I wanted to add something extraterrestrial and supernatural to the video, too.  Also, it is pointing at how important it is for us to be aware of environmental aspects. Do we need to find another planet someday to be able to breathe? All this has been wrapped together by these two worlds happening at the same time, and how in the end it is important that we as lovers, and as a human race, could survive.”

Erja continues: “We added big guitars on the track and it has a guitar solo inspired of blues rock - guitarists such as Eric Gales and Jimi Hendrix. The melodic 80´s rock music was also a source of inspiration while writing the song. Heart is one of my all-time favourite rock bands, and when performing their hit song“Alone” on Stars Stars on national Finnish TV last year, it kind of brought me back to that music style.”