That’s my tabloid headline to draw you in. What this actually is, is an article on the happy marriage of modern Blues and modern Country; which is different than the traditional 'Country Blues' genre. Both genres have evolved over the years, taking in influences from other musical styles, culture, and technology, so it’s no surprise that a new hybrid of the two will reflect on that.

A few years back, I saw a show called CMT Crossroads. The show paired a Country artist, and an artist from another genre and had each of them do a version of the other’s song, and then they would do some songs together. This specific episode featured John Mayer and Keith Urban. Their perspective and interpretation of the music really had a visceral effect on me. I loved how John approached Keith’s songs with his Bluesy, smooth phrasing and how Keith added this new dimension and colour to John’s songs. Both are responsible for evolving their musical genres and both have inspired me to write this piece which I’m going to show you and address some fundamentals to achieve this hybrid. If you already can bend strings in tune and are an intermediate player, I think you’ll get a lot out of this.

Since I’m basing this article on mostly melodic influence, I won’t spend so much time on the rhythm; especially since the rhythm is quite basic. We’re in the key of E minor. The chord progression follows Emi, Cadd9, G, and D. You’ve heard that progression probably a million times. It sounds more Rock or Pop, than Blues or Country. Depending on the vibe, you can strum it with a sparse rhythmic pattern, or a play it arpeggiated with a sparse pattern. (Watch ex. 1)

Here’s where the magic happens of infusing Blues and Country into your melody. Basically the premise is to harmonise the melody with single double stops and chords, while incorporating single note bends in those harmonies. It sounds harder than it actually is. This will give the melody a deeper, more roots sound. It will also emulate the melancholy tones of a pedal steel or dobro, depending how it’s performed.

This is not a golden rule, but maybe a road map for you to follow: When playing double stops with incorporated bends, it’s common to use the 5th degree in the double stop or chord. It doesn’t matter if the 5th of the chord is the bass note or on top voice, as long as that note is not bent a half step. Bending the fifth only a half step in pitch can make your music sound too exotic, which is quite useful in other genres, but to achieve authentic sounding Country, bend the intervals that are in the harmony of the key you’re in.

Basically, bend the note or notes from the original pitch to the next note in that key or scale, while holding down the pitch of the unbent note throughout the double stop bend. So, for the first chord under the Emi, I will have the fifth, “B” as the bass note in the double stop and the upper voicing will be the 2nd (F#) being bent to the minor 3rd (G). Then it’s bent back down the B followed by a pull off to the root note, E. This is all while holding the bass note of B, the 5th.

I’m actually doing this technique throughout each chord in the progression, except under the last two chords, where I’m using hammer-ons and pull-offs instead of bends, which gives more of the Bluesier John Mayer/Hendrix type of vibe. That’s how to achieve a great blend of Country and Blues with a modern feel.

Try using vibrato from your fret hand fingers to emulate the 'crying', or 'laughing' (depending on the mood of the music) of a pedal steel, lap steel, or dobro. If you use it on bends, it will sound more 'pedal steel' in nature. Try it and see how it goes. Be sure to watch the video that goes along with this lesson for even more material. Thanks for watching, and see you next time!

Joe Pesce - How To Sound Country When You’re Not - Yet! Part 3: Country Gospel Chord Inversions

Joe Pesce - How To Sound Country When You’re Not - Yet! Part 4: That Special Lick!

Joe Pesce - How To Sound Country When You’re Not - Yet! Part 5: “The Appalachian Migration” Exploring & Mimicking The Banjo On Your Guitar 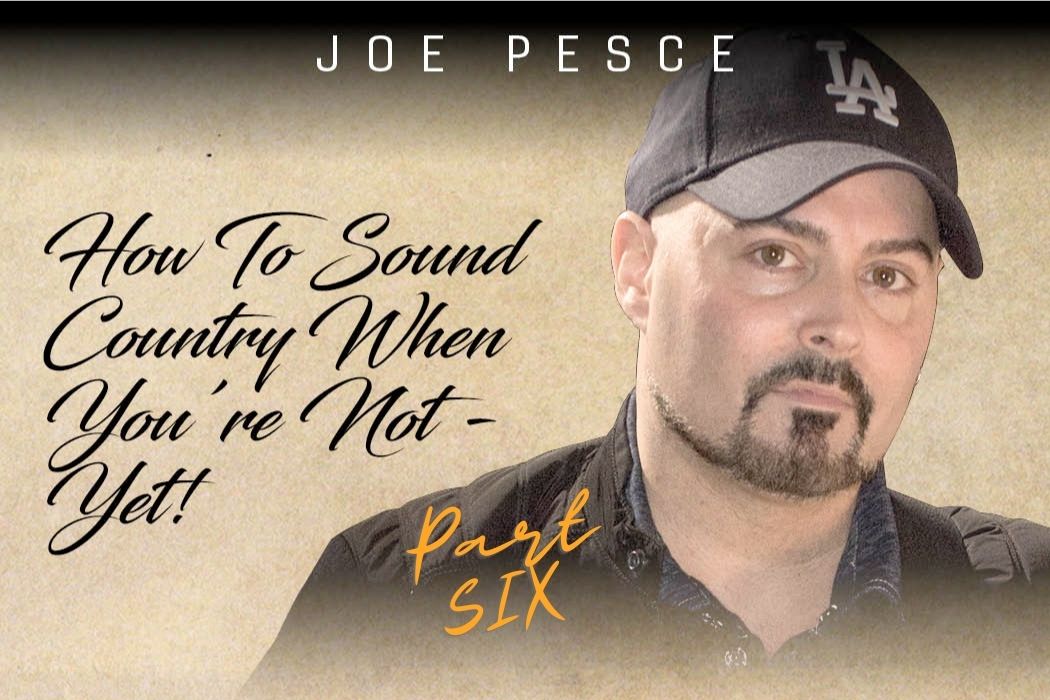 Joe Pesce - How To Sound Country When You’re Not - Yet! Part 6: Dominant Arpeggios In Country Music

Joe Pesce - How To Sound Country When You’re Not - Yet! Part 7: B-Bending for Modern Country Tones

Joe Pesce - How To Sound Country When You’re Not - Yet! Part 8: B Bending for Classic Country/Western Swing Tonality