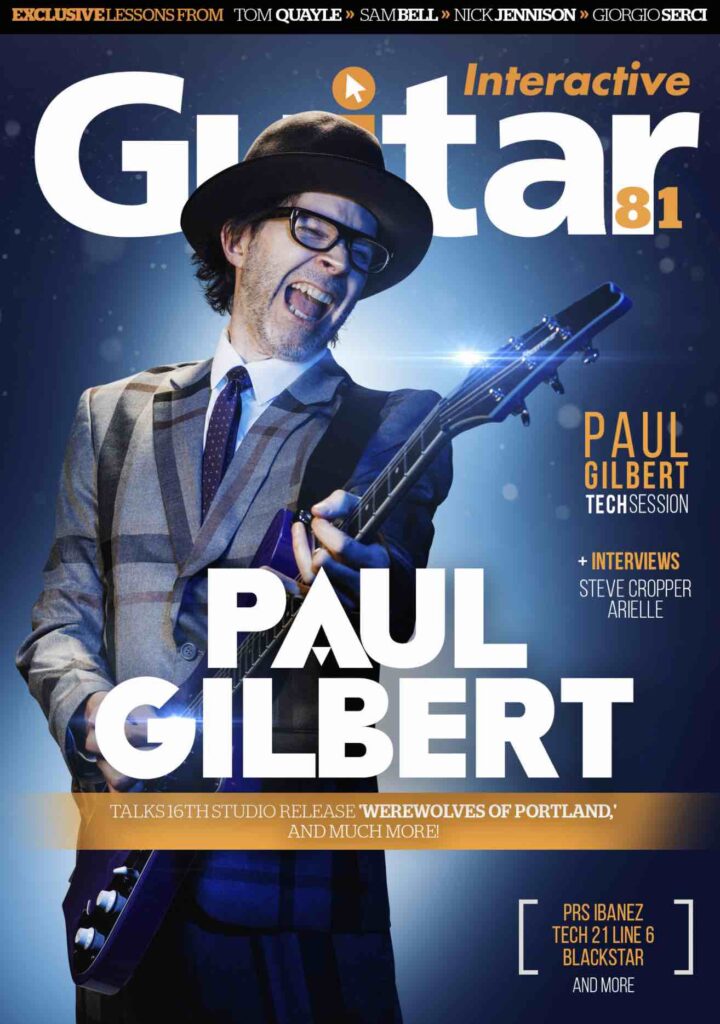 Hello and welcome to issue 81 of Guitar Interactive Magazine!

Paul Gilbert has carved out a seriously impressive solo career with a slew of acclaimed albums like 'Alligator Farm' (2000), 'Silence Followed by a Deafening Roar' (2008) and 'Vibrato' (2012). With his latest (and 16th) solo release, 'Werewolves of Portland,' Paul once again continues to raise the bar on what he can achieve creatively with the guitar...and a handful of other instruments too. Jonathan Graham caught up with the one and only Pablo Gilberto himself for this exclusive Gi cover feature.

Continuing our exclusive features on this issue's cover artist Paul Gilbert, Sam Bell breaks down the unmistakable phrasing and killer technique of the man himself in this issue's Guitar Interactive Tech session.

If that's not enough, we chat with Steve Cropper; the man who’s done just about it all. Involved in virtually every record issued by Stax from the fall of 1961 through year-end 1970, Cropper is bound to have a hit guitar line playing on a radio near you—no matter where you are. We also talk with Arielle as she discusses her new album 'Analog Girl In A Digital World,' her unique approach to writing and her impressive new signature model from Brian May Guitars.

As usual, with every issue, we have a whole host of the latest and best gear reviews from around the world of guitar, with our team of world-class gear reviewers offering their unique insight, expertise, and personality, which as always, I hope you will enjoy. However, if that's still not enough, don't forget all of our exclusive lessons from Tom Quayle, Sam Bell, Nick Jennison & Giorgio Serci.

See you next time.