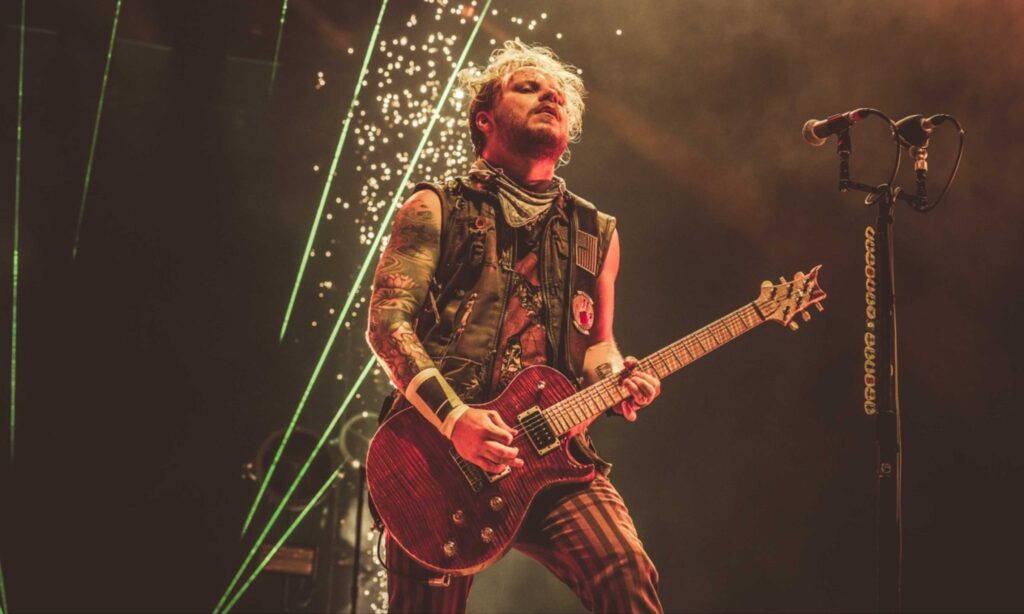 Zach Myers: Turn Up The Volume

As the guitarist of the multiplatinum band Shinedown, Zach Myers is no stranger when it comes to topping the rock charts, earning mainstream recognition and playing to sold-out arenas around the globe—with 10 million albums and 10 million singles sold worldwide. Teaming up with his bandmate Brent Smith (Shinedown frontman), the duo showcases a different yet just as intriguing musical side in the form of two brand new full-length releases, Smith & Myers' Volume 1' & 'Volume 2.' With the albums out now via Atlantic Records, Jonathan Graham chats exclusively with Zach Myers about this incredible new project, how it evolved over time, social media and his love of Oasis and much more.

'Volume 1' & 'Volume 2' is the culmination of a six-year journey that has brought both Zach Myers and Brent Smith to this hugely significant point in their careers to date. In 2014, the two musicians fell upon what Zach calls, "the biggest happy accident of our musical career." Audiences worldwide know them as one-half of chart-topping multiplatinum rock band Shinedown. During a marathon tour cycle, fans chose ten tunes for Brent and Zach to cover acoustically. They knocked out ten covers in about 20 hours, posted videos of each on YouTube, and dropped 'Acoustic Sessions, Part 1' and 'Acoustic Sessions, Part 2' as EPs. Audiences instantly fell in love with these takes on classics by Otis Redding, Kenny Wayne Shepherd, The Black Crowes, Adele, Phil Collins, The Clash, and more. Subsequent Smith & Myers tours sold out rapidly.

While on stage in front of a packed house at Starland Ballroom in New Jersey, Brent broke the news of the forthcoming album to everyone—Zach included. 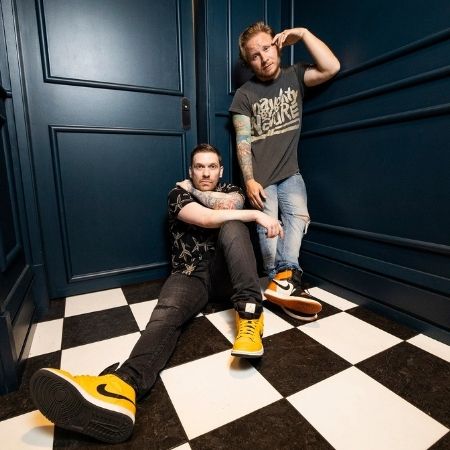 "We're on stage, and I'm playing," recalls Zach. "Brent gets on the mic and says, 'I know people want a new Smith & Myers record. So, we're going in now to make an album!' I was like, 'Wait, what? Where did this come from?" he laughs. "That's how we work. It was like putting something out into the atmosphere. It's Brent's way of maintaining accountability. He never says something without finding a way to kick and fight to make it happen. We knew we were going to make another record, but I found out when that night!"

The hard work and determination that followed evolved into two records comprised of ten originals and ten covers from the likes of Neil Young, Post Malone, INXS, Mark Ronson and Amy Winehouse, The Righteous Brothers, Billie Eilish, Peter Gabriel, Billy Idol, R.E.M. and Oasis. In the lead-up to hitting the studio, fans had submitted their suggestions for what classic songs they'd like to hear Smith & Myers record, and the duo whittled down the covers from that list to what eventually made it onto the albums.

February 2020 would see them retreat to Malibu to record with frequent collaborator and Grammy Award-winning producer and songwriter Dave Bassett. Over the course of ten days, they typically started at 11am with a blank sheet of paper and finished a song by the evening. As the global COVID-19 pandemic set in, Dave's five-day trip to Hawaii turned into a near twelve-week quarantine. Brent quarantined in Los Angeles as Zach returned home, and they intermittently finished recording remotely.

"It was also the most I had ever collaborated with Brent on lyrics," observes Zach. "In Shinedown, we've never had a 'Jack & Diane'. We never made up a story. It's all personal to us. With this music, it was okay to be personal, but to also create stories and characters. Of course, every song has a piece of us. Overall, it's an entirely different direction, though. We're touching on social issues, which we haven't really commented on. We hope you get to know us on a more personal level. There's intimacy, anger, and happiness."

On 'Volume 1,' Smith & Myers make a statement with the original single "Not Mad Enough." Accompanied by solo acoustic guitar, Brent rails against injustice in the wake of George Floyd's tragic death. His voice quakes on blunt lyrics such as "Face down, I can taste the blood. It's hard to breathe, someone let me up," before a rallying cry, "Stop telling me I gotta calm down. You're not mad enough. How many heads are gonna have to hit the ground before you wake up."

On the reimagining of "Rockin' In The Free World," the lyrics take centre-stage uplifted by robust vocal delivery over a lone piano.

"It's so poignant Neil Young could've written 'Rockin In The Free World' in 2020," states Zach. "The lyrics are what we're going through now. It's still relevant, but it's time to discuss things and fix them."

Smith & Myers translate Post Malone's "Better Now" into an upbeat acoustic anthem. "We did it because Post Malone is badass," smiles Brent. 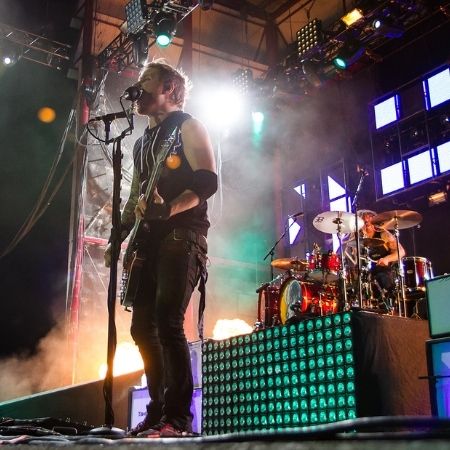 Together, they also add a gorgeous grit to the swinging Mark Ronson and Amy Winehouse staple "Valerie." Then, there's the standout take on "Unchained Melody" by The Righteous Brothers. Brent's voice soars with a fluttering run and spirited soul. Among the other originals, "Coast to Coast" glides along on propulsive piano towards a slick and soaring refrain. On "Panic," paranoid acoustic guitar slips under a theatrical staccato verse from Brent before converging on a schizophrenically catchy hook.

"I'm very active on social media," Zach states. "If you get your news on social media, this world seems like the worst place you could ever be. This is a social commentary song. Everything's wrong. Everyone wants to complain, but no one wants to offer up any solutions. They don't know how to fix it, but they do know how to bitch about it. It's a parody of itself."

Elsewhere, the sombre piano of "The Weight of It All" underscores its palpable rage.

"As far as the lyrics go, we're thinking of those kids who were ripped away from their parents," Zach goes on. "It's just not right. We're putting it right in front of you because we're asking the wrong questions and implementing the wrong guidelines."

Kicking off 'Volume 2' (which was initially released as a surprise follow-up for fans), clean guitar coils around finger-snaps on the opener and first single "Bad At Love" as a soulful timbre takes hold.

In between covers of Billie Eilish's "Bad Guy" and Oasis's "Don't Look Back in Anger," Smith & Myers channel dusty Americana on "GBL GBD." Taken from a critical line in The Shawshank Redemption "Get busy living or get busy dying," it marks another emotional highpoint.

The albums ultimately reflect another facet of two of music's most quietly influential talents. As a testament to their staying power, Shinedown's growing legacy encompasses sales of 10 million albums and 10 million singles worldwide, 14 platinum and gold singles, five platinum and gold albums, 16 number one Active Rock hits, and over 2.5 billion streams.

Ultimately, Smith & Myers illuminates the depth of Brent & Zach—and showcases a very different musical side of these two dynamic artists.

"When it comes to the covers, I hope listeners really hear what those songs are about," Zach leaves off. "We broke them down to where the words mattered. As far as the originals go, I hope the relatability comes across. It's a weird time for everyone. No one truly knows what's going on. For me, I hope it brings some light and happiness."

"We want this record to give you confidence. We want these songs to wrap around you and offer comfort, inspiration, and encouragement. Maybe they open your eyes to the big picture." Zach states, "It's not about the painter; it's about the painting." 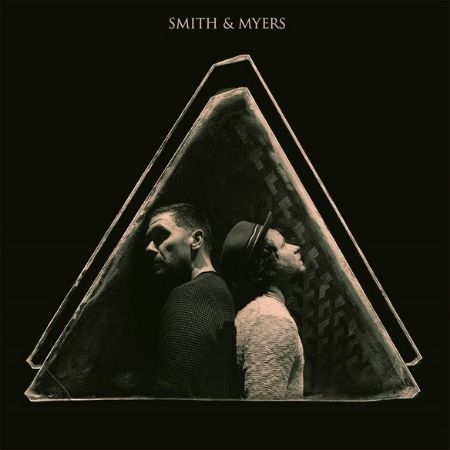