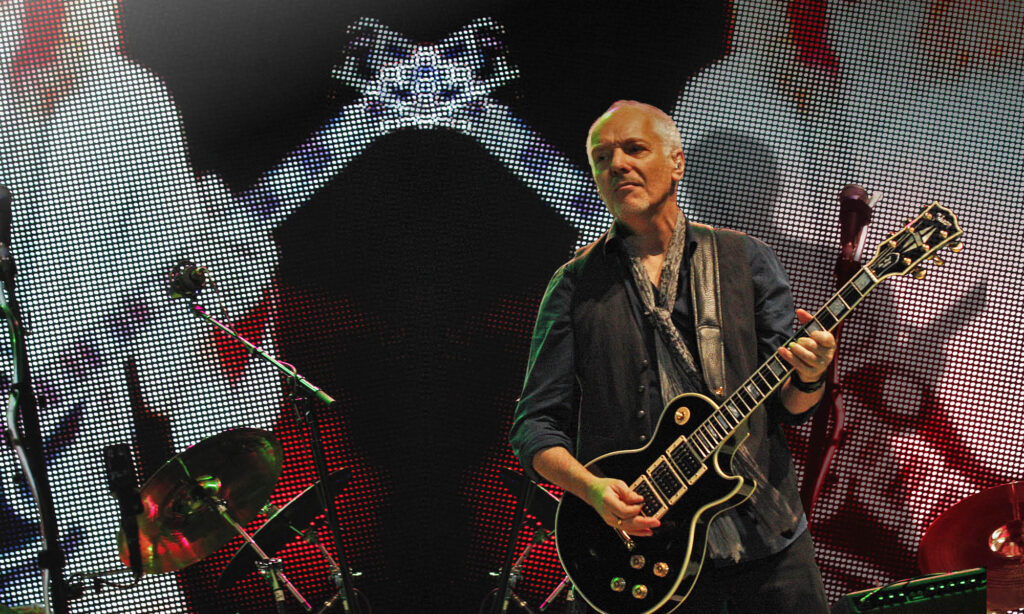 The guitar would rarely leave Peter Frampton's side for the next decade, featuring on some of Rock's most memorable and multi-million selling recordings including; Humble Pie's 'Rock On' and 'Frampton Comes Alive'. Jonathan Graham Lost and Found: The Story of Peter Frampton's 1954 Gibson Les Paul Custom, "Phenix"

In 1970, while performing a run of shows at the Fillmore West in San Francisco with the band Humble Pie, guitarist Peter Frampton wasn't having the best show of his early career. After recently switching from a Gibson SG to an ES-335, feedback from the hollow-bodied Gibson had plagued him throughout the band's opening show.

This prompted Mark Mariana, (a fellow musician, and fan of Frampton) to suggest that Peter try out his modified 1954 Les Paul Custom, and loaned to him for the following nights performance. By the end of the set, Peter was so impressed with the guitar that he offered to buy it on the spot, however, incredibly and generously, Mariana insisted that Frampton accept it as a gift.

The guitar would rarely leave Peter Frampton's side for the next decade, featuring on some of Rock's most memorable and multi-million selling recordings including; Humble Pie's 'Rock On' and 'Frampton Comes Alive'.  Peter and the '54 graced the cover of the later, to create an image that is arguably one of the most recognisable of the 1970s.

Frampton's partnership with the instrument looked to have come to an abrupt end during a tour of South America in 1980, as the Les Paul was thought to have been destroyed in a cargo plane crash near Caracas, Venezuela, that tragically killed all on board. The guitar that had become such an important part of his career was gone forever. Or so it appeared.

Amazingly, Donald Valentina, a Curacao customs agent who repairs guitars in his spare time, recognised Peter's Les Paul, when a local unnamed guitar player brought the battered guitar to him for a set-up (The details of how he came to own it via the burning wreckage are yet to be fully disclosed).

After Valentina had noticed the unusual three pick-up configuration coupled with the various burn marks, while knowing the history of the guitar, he suspected that this might be Frampton's Les Paul.

For the next few years, Valentina, along with Ghatim Kabbara of the local tourist board, tried to convince the guitarist to sell the instrument. A negotiation that would continue until November 2011, when facing some financial difficulties, he finally agreed to part with it for a reported fee of close to $5,000.

With the guitar in hand, Valentina and Kabbara flew out to meet with Frampton to return it to him in person in Nashville, Tennessee. The footage of which can be viewed in the first video clip below.

After receiving a few repairs at the Gibson Custom Shop, the '54 Les Paul is now back on the road with Peter Frampton, three decades after it presumably met a fiery end. A true "Phenix" from the ashes.