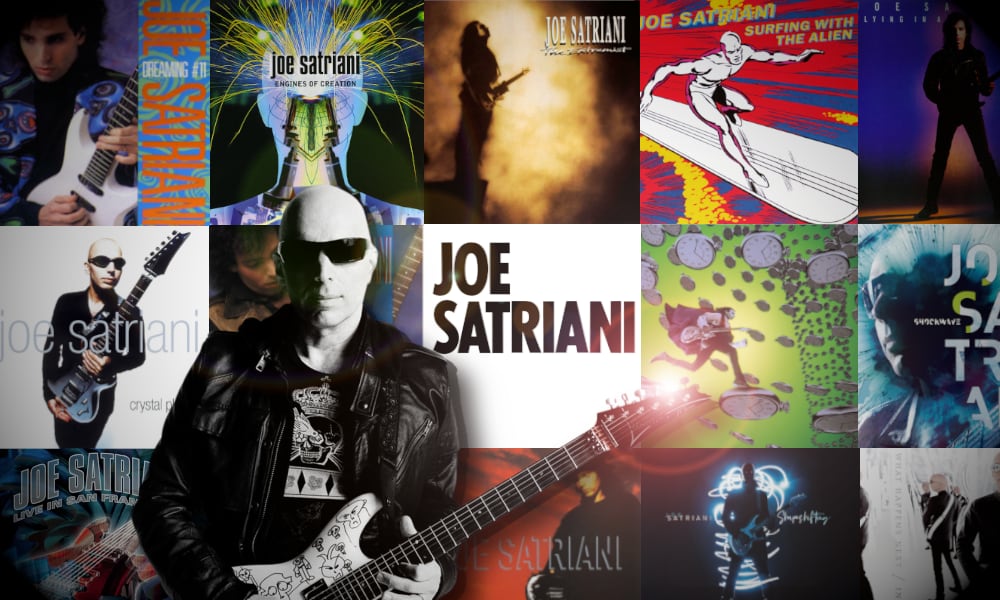 When it comes to the world of instrumental guitar, few names live up to the impact and longevity of Joe Satriani. From the million-selling 'Surfing With The Alien' to Chickenfoot, there aren't many six-string virtuosos that have crossed into the mainstream consciousness quite like him.

Earlier this year, Satch released his superb new album 'Shapeshifting' (via Sony/Legacy Recordings). This latest record marks not only his seventeenth full-length solo release but also ushers in the fourth decade of a prolific career that shows no signs of slipping standards.

With all of that great music to choose from, we thought we'd skip the hits you all know and love and give some special attention to seven of Satch's somewhat overlooked gems from his extensive back catalogue.

"Longing" is one of two bonus tracks from Joe Satriani's thirteenth studio album, Black Swans and Wormhole Wizards and was written during his time with "Supergroup' Chickenfoot(Sammy Hagar, Michael Anthony, Chad Smith).

Featuring Mike Keneally on keys the song contains a powerful and emotive chorus section, with the first six notes striking a remarkably similar vibe to Adele's mega-hit "Rolling in the Deep",(that was released just a few months after). Great minds think alike, I guess?

The tenth and final track on Satriani's Grammy-nominated fourth studio album, The Extremist. The laid-back "New Blues" is a somewhat overlooked composition on an album full of driving and upbeat anthems. However, Satch's Dorian-infused phrases throughout are not to be missed.

Recorded during the album's early studio sessions, the track feels very much like a collaborative live performance, however, Joe played pretty much everything on the track including guitar, keyboard, synthesizer, and bass, with session great, Simon Phillips providing the drum track.

Joe has always been incredible at creating powerful imagery through his music, and with track seven on Joe's debut, Not of This Earth this is no exception. Right from the opening bars of "Driving At Night" you are transported to a fast-moving highway, with one hand on the wheel and the other holding a Rubix cube...It is a very "80's" song after all.

As far as I'm aware, Satriani has never performed this one live, and it could be down to the extremely challenging multi-layer solo that kicks in around the two-minute mark.

"Turkey Man" will be recognisable to some for it's "stacked fifths" opening that was used to introduce "Rubina" on the 2001 Live in San Francisco live album (and "The Meaning of Love" during more recent tours). However, there is a lot more of the track to be appreciated,  including two legato-heavy solo sections.

Another cut from The Extremist. Satriani's "Motorcycle Driver" has always been overshadowed by (arguably) Satriani's most famous track "Summer Song". Both contain an unyielding Mixolydian flavour, and if you have to choose to put just one in your live set, we all know which is coming out on top, right?

That being said, this track is fantastic; with a catchy hook, a blistering solo section and an outro that leaves you wanting more. "Motorcycle Driver" would have been a standout track had it been on any other Satriani record.

With "Love Thing", (track four on Joe's seventh studio album Crystal Planet) Satriani uses a combination of impeccable melodic phrasing mixed with a gloriously oversaturated wah tone, to create a memorable vocal style melody. However, as good as the song is, it's been over fifteen years since it was last performed in front of an audience.

"Love Thing" isn't the only great instrument ballad to take the fourth spot on a Satch record, with "Cryin'" (The Extremist) and "Always with Me, Always with You" (Surfing with the Alien) appearing here on their respective albums tracklisting.

Sonically, a departure from Satriani's previous albums, Satriani's self-titled sixth release was much more of a stripped-down Jam session, with many of the tracks composed in-studio during the recording sessions.

The album's second track, "If" is a great example of that, featuring Manu Katché, Nathan East and Andy Fairweather Low teaming up with Satch to create an incredibly organic track that gives everyone involved their opportunity to shine.