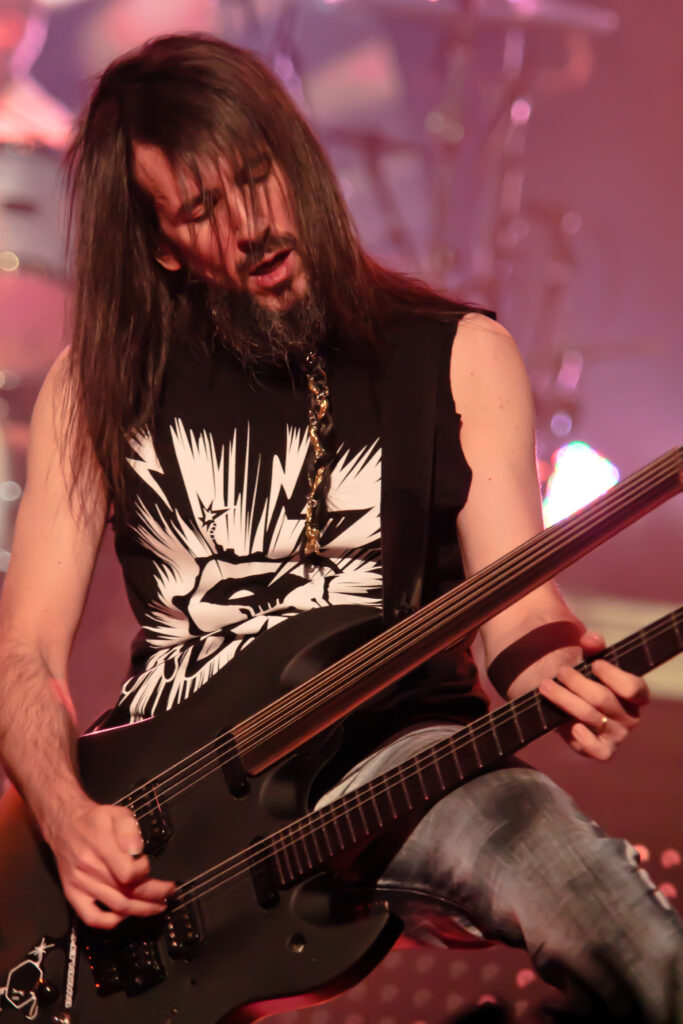 Thal immediately knew he wanted to be a rock star, and at the age of 9, with his Rainman like information retention, it was safe to say he was going to make it.

We've been planning a Bumblefoot cover almost since GI began - but here's a man who moves fast! Finally, we've tracked him down. Stuart Bull asks the questions. Levi Clay has the background on one of Rock's hottest guitarists. You might say he's a fan, too!

Music is such a wonderful thing. It seems that generation after generation we're treated to something new and exciting, either from refinement of current sounds or a fusion of various otherÂ  elements. Sometimes though, someone comes in and does something so left field and out there that their music doesn't seem to be rooted in anything, with ideas that could have only found their wayÂ  to your speakers as a passenger on some alien meteorite. This is the only way to describe Ron 'Bumblefoot' Thal, a man that could be likened to a deranged Einstein of the guitar!

Born in New York in 1969, by his own admission, the young Ron wasn't...quite like other children. Learning to spell before talking and spending all of his time reading encyclopaedias, even writing summaries of what he learnt, there nothing particularly unusual there until you consider that he was just five when he developed such a thirst for knowledge. He continued down this path, becoming quite the social recluse, but eventually found his path on hearing the classic KISS album, Alive.

Thal immediately knew he wanted to be a rock star, and at the age of 9, with his Rainman like information retention, it was safe to say he was going to make it. At first he wanted to plough his energy into drums, but when his older brother beat him to it, he decided that it would be even cooler to be Gene Simmons. Visiting his local music store to pick up a bass, the clerk convinced him that at his age the best way to play bass would be to do two years on the acoustic guitar before making the transition to such a large instrument.

From here all of the obvious influences of the day played their parts: the Beatles, The Rolling Stones and The Ramones, then Van Halen and Jimi Hendrix. By the age of 12 he could rip through just about any Van Halen solo, even learning Eruption backwards! This, perhaps, should come as no surprise though when you remember we're talking about a guitarist adopted his name from a disease common to birds and rats! Oh, and for the record, he didn't catch it. His wife was training to be a veterinary surgeon and he came across the name while she was revising for exams.

Over the years Ron's experimental side started to show as he began to experiment, with a Frankenstein-like relish. First he took his Pace Les Paul, reshaping it and covering it fur. At a later date this guitar would be cut in half (hip to hip) then have its frets pulled out and the fingerboard covered in currency, turning it into a depraved fretless. He then took a Fender Strat and routed out the lower horn so he could attach half a bass guitar neck, which he refretted to cover frets 12 to 24 of a guitar - making it a true mutant double neck. His next experiment involved cutting a bite mark out of an Ibanez Roadster, though when he wasn't happy with the look he decided to just fill it with holes and paint it to look like a block of Swiss cheese. Next, he decided he wanted a guitar shaped like a hand with 37 frets and a dead moth on display preserved in a glass compartment.

Many years later, he decided he wanted a guitar that looked like a foot painted like a bumblebee with a wing that would extend when he used the bar.... and they say Eddie Van Halen had a penchant for modifying guitars!

In 1995, after some years of talking, Mike Varney of Shrapnel Records released Ron's first album, The Adventures of Bumblefoot, a ball-buster of an instrumental album showcasing his deranged licks but also an ability to write a great melody. Some of the more bizarre moments on this album include his use of a thimble to tap beyond the end of the fretboard, using a 9v battery to rake the strings, the unique tapping, harmonics and percussive elements of malignant carbuncle