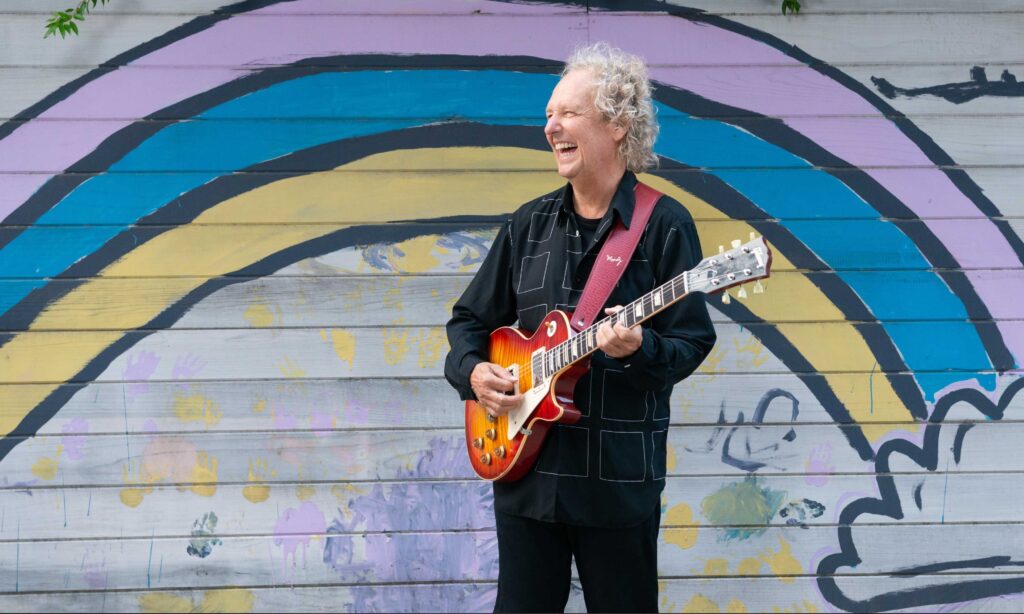 For Lee Ritenour, after a dazzling five-decade and counting career, there aren't many 'firsts' left to achieve, however, with his new album Dreamcatcher he's delivered just that; his very first solo guitar record. The fabled LA guitarist has taken his music to the outer limits, alighting on every genre and occupying every position in the rock 'n' roll firmament. He's been an enfant terrible of '70s fusion, a crossover star of the '80s pop chart, an honorary exponent of Brazilian jazz, and the fingers behind '90s supergroup, Fourplay, plus thousands of sessions with legends such as Frank Sinatra, Pink Floyd, B.B. King, Tony Bennett, among others. The man who's done just about all there is talks about his new album and more with Guitar Interactive.

"People have been telling me for years: 'Rit, you gotta make a solo guitar record," says Ritenour. "In the past, I've always been the band guy, the ensemble guy, the collaborative-guitar-player guy. So this was the one project I hadn't done. And this year, I knew it was time."

Dreamcatcher might have been born from personal challenges, but the record took shape against the global tragedy of Covid-19. Ritenour had already written several key tracks before shutdown. But as he settled into the makeshift studio at his new home in Marina Del Rey, equipped with little more than seven guitars, a computer interface and good intentions, the guitarist let the context flood into the music he was tracking. "It was an important album for me," he notes. "Especially now, with everything going on in the world."

Weaving tapestries of instrumental guitar and conjuring eclectic moods, the 12 tracks of Dreamcatcher rank amongst the most melodic and tinglingly beautiful in Ritenour's catalogue. But there's a power and purpose here, too, hinting at the darker circumstances that sparked this new record. "Our house and my studio in Malibu, California burnt down in 2018," he recalls. "About 100 of my guitars went up in the fire, plus 40 amps, lots of music, the history of my whole career, pretty much. A week after the fire, I went to the hospital, which I'd never had to do before, for surgery to replace an aortic valve. So those incidents and the support from my family and friends absolutely went into this music. Making this record was a life-saver for me."

Even without lyrics, every track tells a story. Take the molten blues licks of "Abbot Kinney", named for the fabled boulevard in Venice, California. "One day when everything was shut down," says Ritenour, "I drove my bike there and was just devastated to find it completely empty. But then I heard this rock guitar start up. I don't know if it was a kid, but somebody nearby had just turned it up to 10 and said, 'Fuck it, I'm gonna have some fun'. It brought a huge smile to my face and inspired me to write that song on my Les Paul."

Likewise, anyone living through the age of Covid-19 will feel a deep affinity with "2020": a three-part symphony in which Ritenour takes the pulse of the times. "The three parts were a reflection of what was going on this year," he nods, "when all of a sudden everybody's life shut down. I was thinking about the young musicians that were out of work – and people in every walk of life."

Elsewhere Dreamcatcher delves beyond the pandemic. While Ritenour strived to switch up musical styles – from the title track's dovetailing classical guitars to the Taylor baritone that drives "Starlight's" tumbling folk, and the mad scientist multi-tracking of "Couldn't Help Myself" – he also ran the gamut of mood. "Because even I get tired," he reasons, "of solo guitar albums when it pretty much all sounds the same."

As such, "For DG" salutes the harmonic sensibilities of the great producer, pianist, and long-time comrade, Dave Grusin. But it couldn't be further from "Charleston", whose mellow slink is laced with bittersweet thoughts on the ebb and flow of US race relations. "A few years ago, I played in Charleston, South Carolina," recalls Ritenour, "and it was charming and the people were warm, and it was a very mixed, soulful audience. Charleston has a history of the beginnings of slavery, but this was modernday Charleston, y'know? But then, a few years later, I'm writing this tune while watching the continuation of the struggle. As musicians who travel all over the world, we go, 'What? This shit is still going on in the US?' So it was appropriate to dedicate that song to Black Lives Matter."

Dreamcatcher not only confronts the here-and-now: it also slips back into Ritenour's rich history. Long-standing fans will recognize "Morning Glory Jam" as a rework of the guitarist's classic 1977 tune. "On 2015's A Twist Of Rit, I had revisited a lot of older material, so I wanted to keep this record fresh. But one day, I remembered when I did sessions for Barry White and how there had been four or five guitar players all playing these incredible rhythm parts. That's the kind of groove I had in my head for this new version of Morning Glory."

Casting his mind still further back, The Lighthouse shares its name with the storied LA jazz club where the teenage guitarist was to be found most nights in the mid-'60s. "I'd started playing guitar at eight, and by 12, I was very serious. Everybody's number was in the phonebook back then, right? So my dad – who was an amateur piano player and always very supportive – called up Joe Pass and Barney Kessel and asked them to give me a guitar lesson. Barney ended up recommending this incredible teacher, Duke Miller, and that was the foundation of all my playing. The Lighthouse was this very funky jazz club where I met Wes Montgomery. By the age of 16, I'd take the car over there in the late afternoons and just watch the bands soundcheck."

Whatever genre you were into, recalls Ritenour, the guitar scene at that magical juncture in the mid-'60s was hard to beat. "In every field, there were legends. In jazz, you had Joe Pass, Wes Montgomery, Barney Kessel, Howard Roberts, Jim Hall, Pat Martino. In Blues, B.B. King, Albert King, John Lee Hooker. In Rock, Jimi Hendrix was coming, Clapton and Beck were already there. In Country, you had Chet Atkins, and the all time great classical guitar master, Segovia, and Sabicas, and Paco de Lucia for Flamenco! Great guitar playing was everywhere you turned, and I loved them all...How could you not?

Those eclectic early tastes served Ritenour well. The jazz giants at The Lighthouse were a passion for life: just check out his love-letter to the great Mr Montgomery on 1993's Wes Bound. But from the day he lucked into his first session for The Mamas And The Papas at age 16, Ritenour had the widescreen musicality to forge a career as one of LA's busiest session men. "I remember John Phillips had this incredible studio in his Beverly Hills mansion and I just thought, 'This is what I want'. As for my favourite and memorable sessions, I remember getting called by Bob Ezrin to record on "One Of My Turns" and "Comfortably Numb" on Pink Floyd's, The Wall...incredible. And then there was Quincy Jones producing George Benson's, "Give Me the Night" album and all of us waiting 'til 4am for Stevie Wonder to show up and play a song he'd written for George's album...Ha! Too many memories!"

Like close friend and fellow session ace, Toto's Steve Lukather, Ritenour was always more than a gun-for-hire. In '76, he launched his own solo career with First Course, and managed the magic trick of following his muse while finding enviable commercial success, especially in the '80s. "On the West Coast, fusion was just starting," he remembers, "and we were beginning to combine the melodies of pop music, but with the sophistication of jazz. We were listening to people like John McLaughlin, Chick Corea, and then at the same time, Grover Washington Jr, David Sanborn, Bob James. So it was really a natural evolution for my own records to evolve out of that. When I finally did win a Grammy in 1985 – for "Early A.M. Attitude" – I think I was actually stuck on the freeway. But awards aren't the reason we're making music."

Likewise, while the jazz supergroup Fourplay scored a commercial hit with their eponymous 1991 debut album. For Ritenour, the attraction was all about the chemistry between the band members. "The magic was immediate between me, Bob James, Harvey Mason and Nathan East. You can't draw that sort of thing up on a chart – it either works, or it doesn't. We did three albums, but then the business got so complicated that I took a pass in 1997. But there was always friendship and musical respect, and we are talking about doing one last reunion project together."

Respect was palpable, too, when Ritenour made the 2010 album, Lee Ritenour's Six String Theory: an all-star album that drafted many of the famous friends he'd picked up along his path. "In the early days, you could never put Country, jazz, rock and all these styles on the same record. The record companies would say, 'No, you've got to have one theme'. But by 2010, the labels weren't as powerful as they were, and they were looking for interesting projects. I went to my buddy Steve Lukather, and George Benson and B.B. King, and they all said yes. We opened it up to players like Joe Bonamassa and John Scofield – and everyone played their ass off."

Collaboration might be a constant, but in a career full of left-turns, Dreamcatcher is another thrilling detour for Lee Ritenour. Both by necessity and design, this latest album represents music in its purest form: one man, channelling his headspace and the history unfolding around him, using the instrument that has sustained him all these years. There is a first time for everything, and there has never been a better time for "Dreamcatcher". "I've never done anything like this before and it's an important missing piece in my guitar history. It was inspiring, and it was meant to happen this year, in these times – after a lifetime of playing the guitar," he considers, "this project reaffirmed just how much I love the guitar."