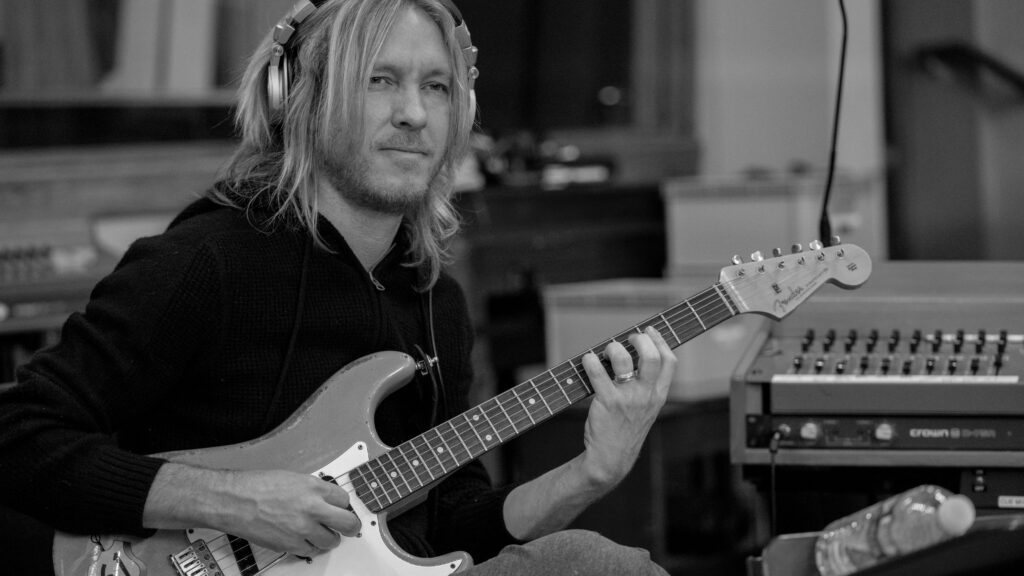 For the last quarter-century, riding shotgun with Kenny Wayne Shepherd has been one heck of a rock ‘n’ roll road-trip. Erupting onto the early-’90s scene with his burn-it-down guitar solos and gut-punch songcraft—the 41-year-old he’s become is even more magnetic, still pushing his Fender Strat where others fear to fret, with an honesty that only comes with age and miles on the clock. Guitar Interactive Magazine sits down with the Louisiana gunslinger following the release of his brand new album ‘The Traveler’ for an exclusive interview and live performance.

The two years since ‘Lay It On Down’ have passed in a blur. Shepherd’s most recent studio album earned praise from respected media outlets like Classic Rock magazine for its “guitar rampages and thoughtful songcraft”. Although, for the bandleader, the true measure of its success was the reaction on the ground. “For me, true success is about a fan saying how much a song affected them, or watching them sing along in the front row. And I think Lay It On Down did all of those things.”If that quarter-century journey has taught Shepherd anything, it’s that there’s no such thing as mission accomplished. In 2019, with the choruses from ‘Lay It On Down’ still on our lips, the bandleader teases us with a tantalising twin-comeback, with ‘The Traveler’ set for release in May and plans afoot for a third spin with his all-star side-project, The Rides, alongside Stephen Stills and Barry Goldberg. “When you feel inspired, the best thing is to keep tapping into that,” he reasons. “If you step away, it’s hard to get it going again. I’ve been prolific lately, and I want to keep that going.”

Don’t mistake his momentum for autopilot. “The spirit of ‘The Traveler’ is a continuation, but this album definitely has its own identity. It may have more of an edge, a little more rock ‘n’ roll. As a grown man and a father, there are different thoughts and feelings that have come into focus for me.”Like all the great songwriters, Shepherd’s studio catalogue has always been the best way to get under his skin. His path was set from childhood, as he copped the licks from the records brought home by his concert promoter father, and was sent reeling from a “life-changing” meeting with Stevie Ray Vaughan, to make his own stage debut aged 13. With early albums like ‘Ledbetter Heights’ (1995), ‘Trouble Is…’ (1997), ‘Live On’ (1999) and ‘The Place You’re In’ (2004), the blues-rock scene hailed its most honest new songwriter, who chronicled the highs and hard times, while dousing his shows with guitar pyrotechnics. “The first five years of my career,” he remembers, “I was on tour non-stop. I’d probably go home for two weeks a year.” 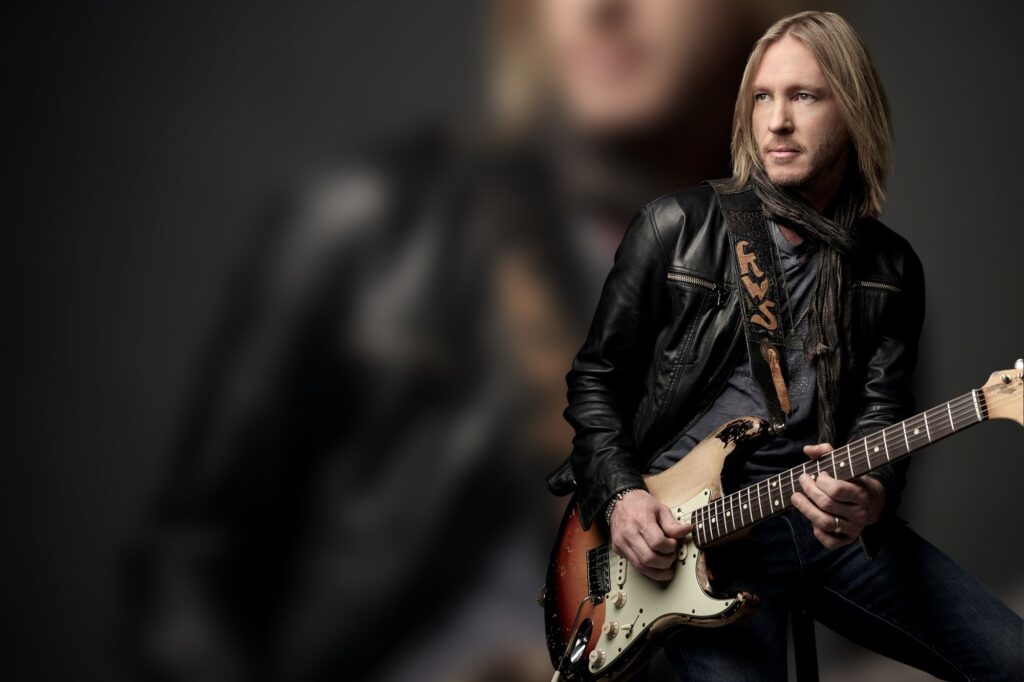 A musician in constant motion, Shepherd, has spent the post-millennium burning the tarmac and crossing continents, stopping off for releases that include 2011’s acclaimed ‘How I Go’, 2014’s rocket-fuelled collaboration covers album, ‘Goin’ Home’, and 2017’s ‘Lay It On Down’ not to mention, a couple of releases sprinkled in from his “side project” The Rides in 2013 and 2015. Now, ‘The Traveler’ reaches across the battle lines of a planet that has never been so divided. “The album title comes from the song Tailwind,” he explains. “We’re all travelling together through this thing called life. These are testing times for us as a society, and it seems to me that it’s been a bit crazy in the world lately, with so much division. Without making any kind of political point, it’s like, ‘Let’s get through this together, appreciate one another and not always be trying to fight’.” The new songs typically began with a raw riff captured on Shepherd’s cell phone. But they blossomed into full technicolour at Neptune Valley, Los Angeles, where the production team of Shepherd and Marshall Altman led a crack-squad studio band and sculpted a tracklisting that can be both savage and soothing. “I’ve always loved ballads, tender songs, emotional moments,” says Shepherd. “But I also like to rock. I like to play fiery blues. This album has all those elements. It’s the fans who give me that freedom, they’ve supported me through every kind of album I put out.”

World-class guitar playing has always been his calling card, but in his forties, Shepherd knows when to blaze and when to breathe. “There’s some restraint on ‘The Traveler’,” he considers. “As I’ve gotten older, I’ve started to lean towards the approach of less is more. I play for the song now, versus what gets me more ‘oohs’ and ‘aahs’. There are some real moments on here, especially the solo in ‘I Want You’. That’s a really extended song, just for the sake of playing some great guitar. ‘Turn To Stone’ is a guitar anthem as well. It just builds and builds, and it’s the vehicle for the guitar solo to shine. For rhythm playing, one of the coolest songs is ‘Woman Like You’, it’s that straight-up Les Paul sound, but the guitar part just has some really interesting timing and becomes the signature riff for the song, weaving in-between the vocal.”

As for the voice, it’s never sounded stronger, fusing heartfelt delivery with some of the most sharply observed lyrics of Shepherd’s career. Currently, Shepherd shares more vocal responsibilities with his long-time singer, Noah Hunt, than on past releases, allowing the band more versatility in both the studio and in their live show. “I still don’t sound like Muddy Waters,” he smiles. “But I’ve grown as a vocalist. I owe a lot of the credit to Stephen Stills for pushing me in The Rides to sing more,” The lyrics were important on this record, too. With ‘Woman Like You’, my goal is to glorify the woman in the relationship, not tear her down. Some songwriters focus on the negative aspects of a relationship, but this song rocks and makes you feel good.” 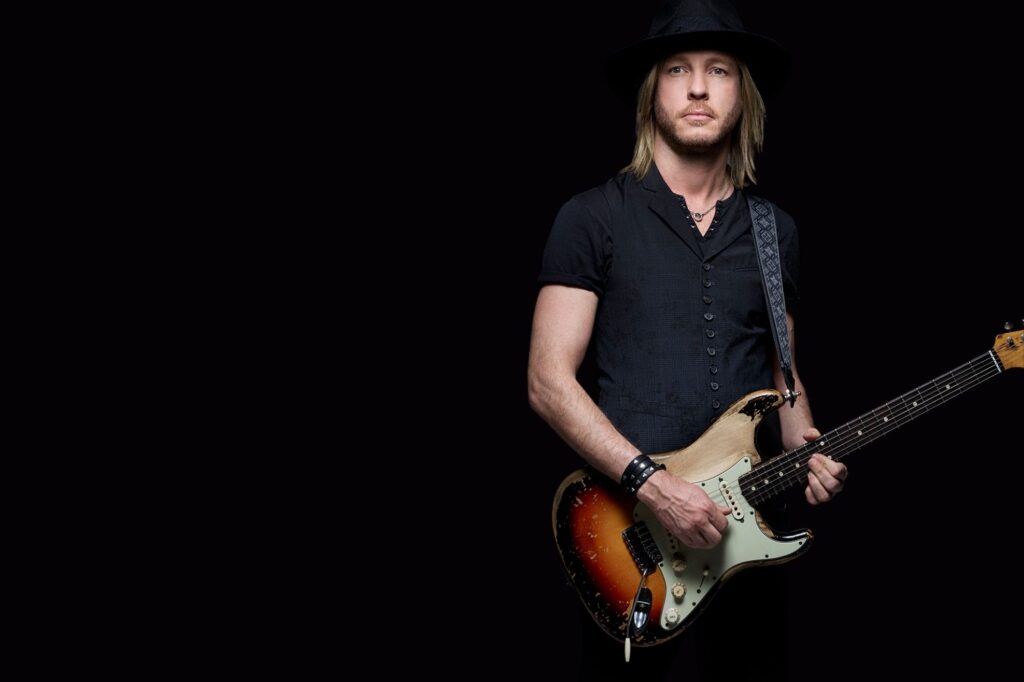 As the album unfolds, the lyrics continue to dodge the blues clichés. “ ‘Long Time Running’ is someone expressing what it’s like to lead a complicated existence,” says Shepherd. “’Tailwind’ is basically saying, ‘Hey man, let’s stop all the fighting. There’s no need for all the hate. Let’s just get along and love each other’. On the surface, ‘Gravity’ is about a very complicated relationship. You could conclude that someone dies at the end of the song, but there are so many ways to interpret it.”

Shepherd holds listeners rapt as the mood shifts from revelry to reflection. “’With We All Alright’,” he says, “I just wanted to write a song with that classic groove. We started laying it down and it felt like a party, so that’s what we wrote. It’s all about having a good time, no need for any fussing and fighting. ‘Take It On Home’ is about really appreciating my roots. That’s really hit me in the last few years. That song tells my story, as a person who travels the earth playing music, but ultimately knows that it’s time to go back home, be grounded and regroup. On ‘Better With Time’, this guy is talking to the love of this life and it’s like a moment of gratitude.”

It’s a testament to Shepherd’s songwriting that his originals stand alongside two auspicious covers. “I was asked to do an event honouring Joe Walsh,” he explains, “and everybody had to choose a couple of songs to perform. I’m a catalogue guy. I like to dig and find the hidden gems. I came across ‘Turn To Stone’ on YouTube and watched it over and over. So we did that song at the event, and it came off so well we did a completely live take in the studio. As for the Buffalo Springfield song, ‘Mr. Soul’, Stephen had the idea of getting me, him and Neil Young onstage together at an autism benefit show. It was in the back of my mind that ‘Mr. Soul’ would be a killer song to do, and it was just a spectacular moment. So this was my way of paying tribute to that amazing experience on record.”

He may move amongst legends, but the modest Shepherd brushes off any suggestion that he belongs in the same breath as the blues greats he collaborated with on 2007’s platinum-selling and Grammy-nominated documentary, ‘10 Days Out: Blues From The Backroads’. Yet he’ll accept that with the old guard fading, there’s a responsibility to carry the torch. “The inescapable reality is that I’m getting older, and the generation of blues artists that went before, well, y’know, nobody lives forever. If I live long enough, I’m gonna wind up in the category of the older statesmen of the blues. For anyone in that position, I think it’s our duty to pass it on. It’s not all about me and my music, the goal is a broader one of keeping the genre alive and relevant.”

For Shepherd, that means travelling on. “Being on the move is just a part of who I am and what I do,” concludes the bandleader, his eyes on the horizon. “Now that the album’s finished, it’ll soon be time to hit the road again. I don’t have any intention of sitting idly. I just want to keep moving and keep creating and keep doing what I love – for as long as I possibly can…”