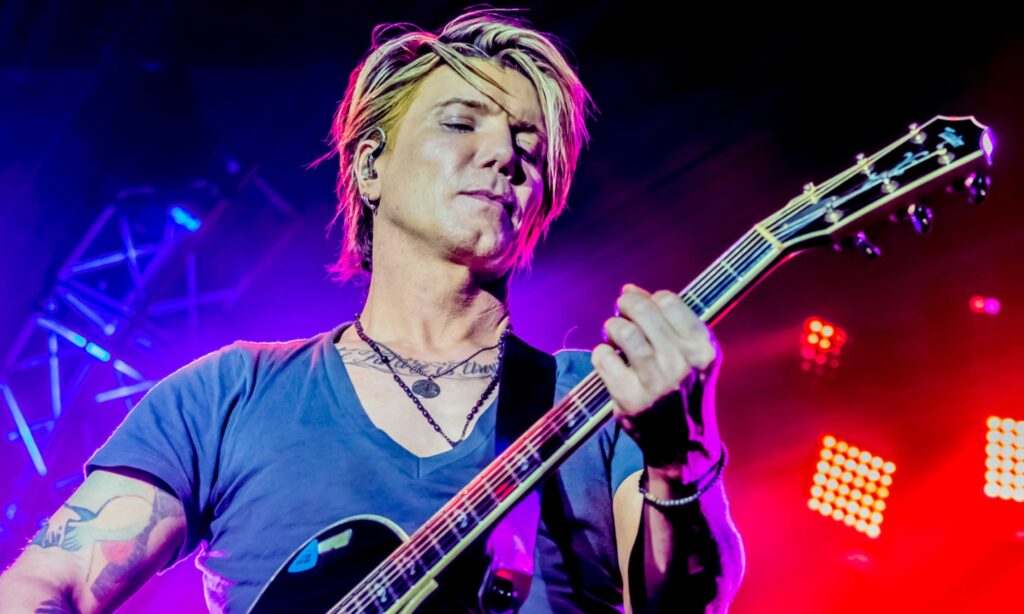 John Rzeznik: Home for the Holidays

With a career spanning almost thirty-five years (and counting), the Goo Goo Dolls has, without a doubt, become one of the most definitive and successful bands in the American Alternative-Rock genre. That long in the game leaves very little opportunity for new "firsts" to present themselves, which makes the band's latest release (their first-ever holiday record) 'It's Christmas All Over' even more special. Jonathan Graham chats with the Goo Goo Dolls' frontman John Rzeznik about the new album and much more for this exclusive Guitar Interactive Magazine feature.

Formed in 1986 in Buffalo, New York, the band has since achieved monumental success with over 12 million album sales and 19 top ten singles worldwide. The group (originally named Sex Maggot) first began as a product of the 80's era wave of 'hard and fast' underground punk rock before transitioning into their more recognisable melodic alternative sound. Their first self-titled release was released under Mercenary Records in 1987 but was picked up the following year by the larger Celluloid Records. 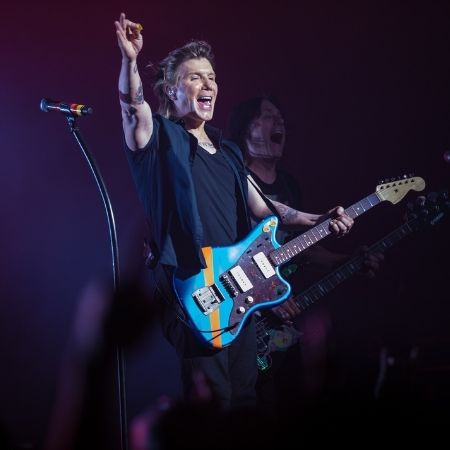 The first few years consisted of relatively moderate success for the 3-piece punk trio, with significant activity on various underground music circuits and independent radio. However, the band's 1995 release, A Boy Named Goo, was sonically a stark contrast from the band's prior releases. Trading in ripping guitar riffs and shouty vocals for a sound more infectiously melodic, the band achieved commercial success with their acoustic ballad-esque single, "Name" in 1995.

This shift toward a more mainstream sound undoubtedly angered many of the band's early followers. Frontman John Rzeznik once recalled receiving a rather hostile letter from a frustrated fan in response to this shift.

"It began,"  'You suck," Rzeznik said. "Name" sucks. You sold out, big-time. I used to like you, but now I hate you, and I'm getting rid of all your records. Signed, Indie Punk Rock Guy.'"

Despite the initial opposition from prior fans, it was this newfound sound and success that ultimately paved the way for beloved hits to come such as, "Iris," "Slide," "Sympathy," and more.

"I've always played the acoustic guitar, but I finally got to a point where I felt the material I wrote on acoustic was good enough to bring to the band," Rzeznik explained in a 1998 interview with Guitar World Acoustic. "I'm not as afraid of bringing new styles of music to them anymore, and I'm not trying so hard to be punk, or whatever we were... I'm not afraid of being criticised anymore," he said.

This shift is perhaps indicative of Rzeznik's and the band's prolific growth in both musicianship and songwriting. Consider the lyrics of "Messed Up" – 1987 compared with "Name" – 1995, for example.

And scars are souvenirs you never lose,

The past is never far,

Did you lose yourself somewhere out there?

Did you get to be a star?

And don't it make you sad to know that life,

Is more than who we are,

"A lot of punk bands paint themselves into a corner with a set of hard-and-fast rules that they can't stray away from," Rzeznik said. "Only the Ramones can get away with making the same record seventeen times."

According to Rzeznik, this change carried with it the resolve to create more meaningful art from which he often drew from his past experiences when writing.

Rzeznik's formative years were not void of strife by any means. He was born in 1965 as a product of working-class America, a strict Catholic upbringing and a blue-collar polish migrant family. Raised in Buffalo's East Side Polish neighbourhood, his writing often reflects on the struggle he both experienced and witnessed growing up. Notably, "Broadway" from 'Dizzy Up the Girl' is a pretty good example of this. Furthermore, Rzeznik attributed a great deal of his motivation for success to his experiences during his blue-collar upbringing.

"When I was young, my dad used to take me down to the local bar, prop me up on the barstool, order a drink for himself and a soda and chips for me," he said in a 1998 interview. "He'd give me a quarter for the pinball machine and sit there and drink. I'd look around and see all these kids who just turned 18, and they were hanging out there, sitting in the same chairs as their fathers. When they were old enough to drink with their dads, they took his place at the bar, carrying on the tradition." 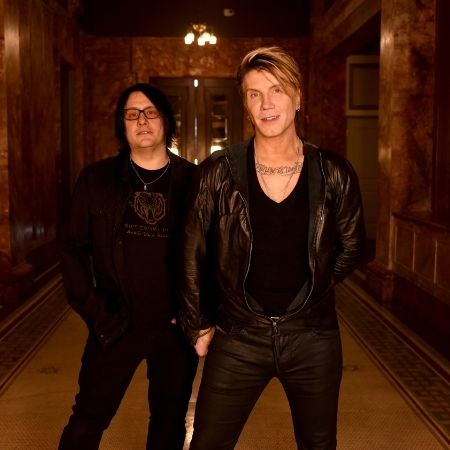 Rzeznik's father passed away in 1981, and his mother passed away soon after the following year, leaving him to be raised by his four older sisters before moving to uptown.

"That got me away from the environment that killed my father," he said. "He could never rise above it, never see beyond it. He got drunk every day."

Today, Rzeznik still clings to his blue-collar past. In the band's early years, he admitted that he 'was always one step away from going back to the plumbing job he held in his teens.' Now though, with no threat of returning to the working class, Rzeznik reflects on it creatively with the intent to inspire others with a very genuine sense of hope and encouragement.

Following a sold-out 2018 twentieth anniversary tour in celebration of 'Dizzy Up The Girl,' Goo Goo Dolls wrote and recorded their twelfth full-length album, 'Miracle Pill' (Warner Records)—igniting a bold and bright new era in the process. Hot on the heels of the deluxe edition release of 'Miracle Pill,' the band's latest release sees them celebrating Christmas early with their first-ever holiday record 'It's Christmas All Over.' Out now via Warner Records, the album is filled with cover renditions and reimaginings of iconic holiday songs such as "Let It Snow" and "Hark The Herald Angels Sing", as well as two new originals that capture the warmth and nostalgia of classic Christmas favourites.

"This album we dedicate to everyone, everywhere who still believes in hope," said Rzeznik. "God knows we need a lot of hope this year. From the deepest part of our hearts, happy holidays from all of us to all of you."

Goo Goo Dolls' "It's Christmas All Over" is out now via Warner Records.

Goo Goo Dolls "It's Christmas All Over" Track List

In 2021, the Goo Goo Dolls will be back in the studio crafting a new album and are slated to hit the road for an expansive North American tour in the summer. Kicking off on July 22, 2021, in Boise, ID at Ford Idaho Center Amphitheater, the nation-wide tour will visit numerous amphitheatres throughout the US and Canada such as Red Rocks in Colorado and The Greek Theatre in Los Angeles. 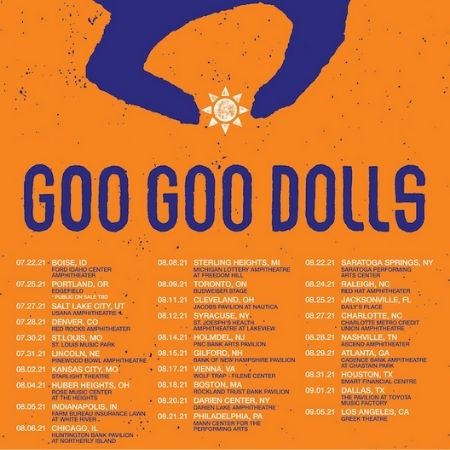 "Thank you so much for all your understanding during this challenging time," John Rzeznik states. "We promise to keep putting up as much material (videos, b-sides, acoustic songs, some, just plain talking, and some new stuff). We're digging through our archives for live material. We need to stay in touch with you as much as possible until we can see you all again in person. Please message us with any requests you might have. We'll get through this. And look forward to great times again, together!!"

For tickets or more information on the Goo Goo Dolls, please visit googoodolls.com