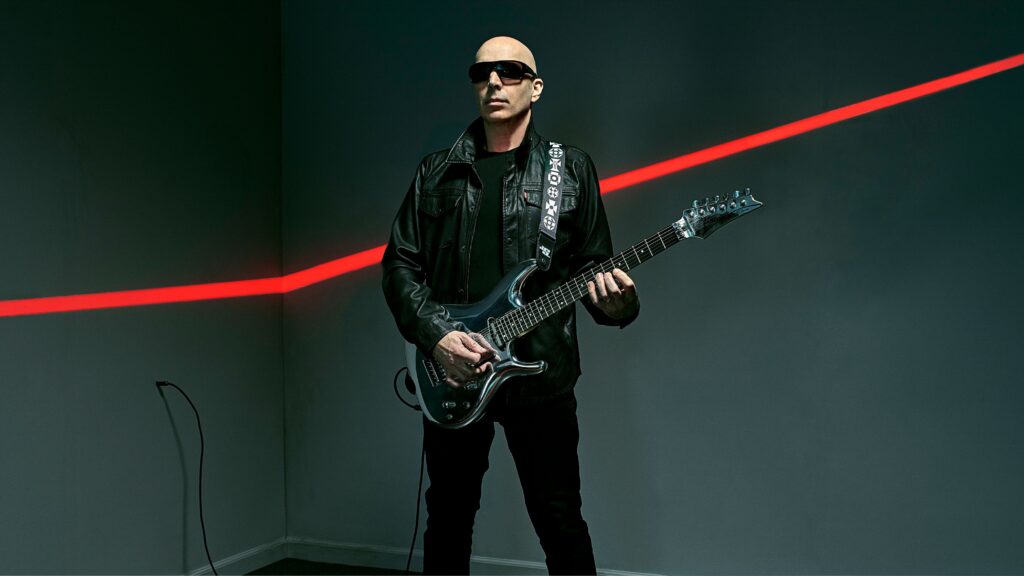 After writing and recording sixteen solo albums — and contributing some immense guitar skills to countless other projects over the course of three decades — one could potentially find themselves a little lacking for inspiration or fresh ideas. That is not the story of Joe Satriani. With his latest release 'Shapeshifting,' (out now, via Sony/Legacy Recordings) Satch is back with a sonically spellbinding new album that ushers in a new era of Satriani musical mastery. Guitar Interactive Magazine editor Jonathan Graham sits down with the instrumental guitar pioneer to discuss the writing and recording of the latest record, almost being electrocuted on a video shoot, plus some surprising fan theories on hidden messages within his music.

The 80s were a particularly special time for electric guitar players and fans alike. With each new passing day, a new six-string superstar would appear to emerge and seek to push the boundaries of what was deemed possible on the instrument, however, with varied results in the "but is it actually any good?" department. Enter Joe Satriani. More than merely a virtuoso soloist, Satriani has made his name in music crafting and executing beautiful melodies that left some wondering why we even bothered with vocalists in the first place. Not only is Joe a musical icon but he has also been tutor to such luminaries as Metallica's Kirk Hammett, Larry LaLonde of Primus and fellow New York native, Steve Vai. The mentoring of these contemporary greats alone would make Satriani a significant figure in the history of rock guitar. However, for Joe, this was just the beginning.

Satriani moved out to Berkeley, California in 1978, supporting himself through teaching and performing with local bands. His first notable steady gig was with power-trio The Squares, self-releasing an EP in 1984 (a full-length release of the original recordings would eventually follow in 2019) and then joining the Greg Kihn Band in 1986. At this point, inspired and fully determined to launch a solo career, Joe financed his full-length debut LP, 'Not of This Earth' through his a newly acquired credit card. A gamble on paper, but one that truly paid off. 'Not of This Earth' saw a wide release through Relativity Records in 1985 to critical acclaim, however, it would be his follow-up, 'Surfing with the Alien' that would launch Satch to the stars. Dropping in the fall of 1987, (also on Relativity) the album's almost unanimous rave reviews among the guitar publications helped start a steady march toward the rock mainstream. Over the next year, "Satch Boogie" and the title track "Surfing with the Alien" ranked on Billboard's Mainstream Rock chart and pushed the album to 29 on the Billboard 200; going on to be certified platinum by the RIAA. An unusual occurrence to this day for an instrumental album.

Satch's apparent overnight success brought him considerable attention, not only from the Rolling Stones' frontman Mick Jagger, (playing guitar on his 1988 solo tour of Japan) but also from many of the large guitar brands including Ibanez. 1989 proved to be an important year for Joe with the Japanese guitar giant, as the JS1 (his first JS signature guitar), would be introduced. Based on the 540R (Radius) model that Satriani had been previous utilising, this custom model with refined body contours, neck shape and hardware, became the classic signature model we all recognise in Joe's hands (albeit with a few design tweaks over the years) to this day, from that original JS1 to the current JS2450.

With new axe in hand, the stage was set to work on the next album, 'Flying in a Blue Dream.' Released in 1989, the album even contained a couple of cuts where Satriani sang lead vocals. A mainstream concession that may have helped the record climb further in the charts — supported by the singles "I Believe" and "Big Bad Moon," that both climbed high on Billboard's Mainstream Rock chart.

After a lengthy period of writing and recording, his fourth release, 'The Extremist' would finally be unveiled to the world in 1992. Driven by the lyrical "Summer Song," (his biggest hit ever — reaching number five on the Mainstream Rock charts) 'The Extremist' peaked at 22, Satriani's highest-ever position on the Billboard chart. This record showcased Joe's ability to explore new territories in the field of folk, jazz, blues as well as hard-rock, served best by classy examples such as "Rubina’s Blue Sky Happiness," "Why," "New Blues" and "Cryin'" — cementing his status as a household name for all guitarists to this day.

Over a dozen more incredible records have been released in the decades that followed, including the Glyn Johns-produced eponymous album from 1995, his 1998 epic 'Crystal Planet,' the electronically infused 'Engines of Creation' (2000) the prog-minded 'Black Swans and Wormhole Wizards' (2010) and hard-rock/fusion focused 'What Happens Next' (2018), just to name a few.

With each album or project comes a "levelled-up" Joe Satriani, ready to tell a new story with a fresh delivery each time...while bringing along some of the good bits from the previous instalmanets for good measure. In no better way has that been actualised than in his lastest record's melting pot of ability, experience and intent; crafting an album that will quickly become an instant fan favourite. 'Shapeshifting' marks the legendary guitarist’s 18th studio album in his nearly 35-year career in music. The album grew out of a plan to focus on the idea of changing as the central theme. Listening to the initial demos that he had recorded, he thought the “shapeshifting” phrase was one that would fit well with the songs that he had come up with, and with multiple styles, techniques and approaches it's easy to see why.

Joe explains, “I started to think that this sounds like 15 different guitar players,” Satriani says. “I know it’s the same guy, because it’s me, but it sounds like I’m really moving into an area where each melody requires me to almost be somebody else.”

To realize this vision for the album, Satriani enlisted a wide range of collaborators, both old and new, to help him bring the songs to life. Kenny Aronoff, Chris Chaney and Eric Caudieux were the core musicians on the new album with additional contributions coming from Lisa Coleman (The Revolution) and Christopher Guest (Spinal Tap's Nigel Tufnel). Jim Scott (Foo Fighters, Red Hot Chili Peppers, Tom Petty & The Heartbreakers) co-produced the album sessions with Satriani. Longtime associate John Cuniberti was on board as well, handling the mastering duties. On all aspects 'Shapeshifting' showcases a newly evolved Satriani primed and ready for the 2020s. As for his next musical metamorphosis? Well, your guess as good as mine, but I can guarantee there will be some good playing involved.

'Shapeshifting' is available via Sony Music/Legacy on all streaming platforms today.

08. All My Friends Are Here

A hugely successful recording career is only half of the story when it comes to the continued legacy of Joe Satriani of course. Playing on stage is where he really brings these songs to life. Satch has travelled the globe, performing to sold-out crowds as both a headliner, as part of the all-star “G3” guitar extravaganza and of course his side project, Chickenfoot, featuring Sammy Hagar, Michael Anthony, and Chad Smith. With each new album comes the expectation of a new world tour, however, due to the current global situation, we will have to wait just that little bit longer for our Joe Satriani live fix.

“The current COVID-19 virus has now reached pandemic proportions and is making daily life for all of us very challenging,” said Satriani in a press release. “As always, my concern for the health and safety of my fans, my band and crew always take precedence when touring, and now is no exception. I’ve had to make the difficult but necessary decision to postpone the 1st leg of the European Shapeshifting Tour, and we are working to reschedule the shows that are affected,” Joe explained. “Please hold on to your tickets for the rescheduled tour dates. Let’s band together to beat this virus and rock another day.”

The European leg of “The Shapeshifting Tour” (which was set to begin on April 15, 2020) has now been rescheduled for April 2021.

To find out more about Joe Satriani's brand new album and the 2021 tour, visit: www.joesatriani.com