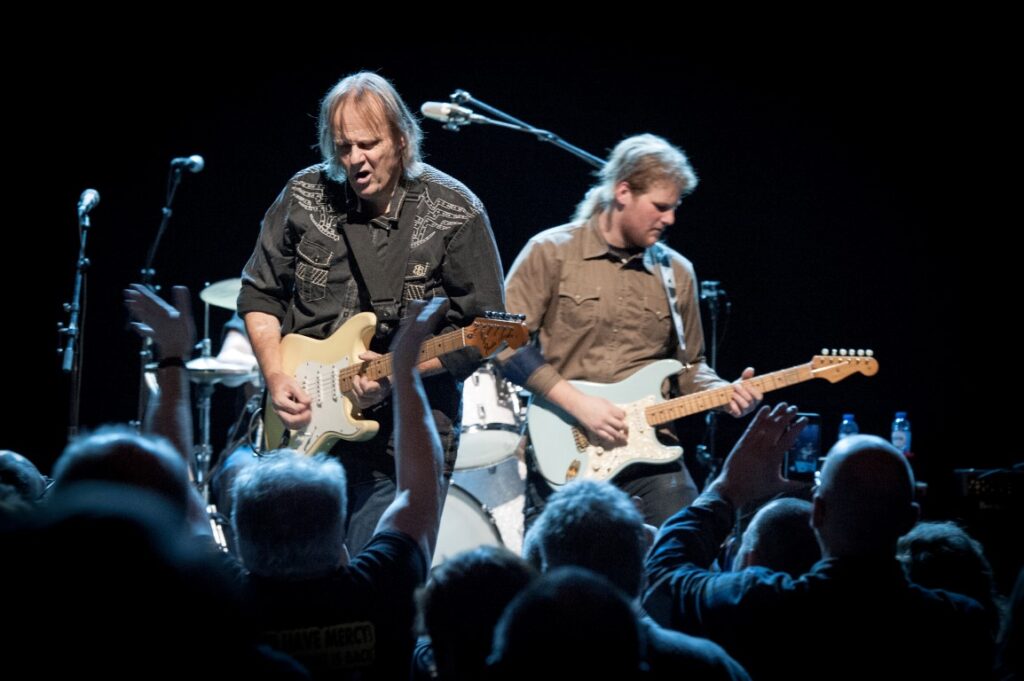 Blues Rock kingpin Walter Trout is one of those musicians for whom being a sideman was never going to be enough, although he certainly left it late before going solo.

Many professional guitar players are happy to go through life playing second fiddle to others. This is no bad thing, of course: as the six-stringer for a name artist, you get to play well-known songs on big stages - almost certainly bigger than you would enjoy headlining under your own name - to adoring crowds. You might even get your own little solo spot if you're lucky. Then, when the show's over, you get to relax and chill out until the next one, free of most of the PR drudgery that comes with the job of being a rockstar'.

Blues Rock kingpin Walter Trout is one of those musicians for whom being a sideman was never going to be enough, although he certainly left it late before going solo. In fact, it was on his 38th birthday that he told his good friend - and bandleader at the time - John Mayall that he was going to be heading out on the road alone.

It must have been a difficult decision. As Trout explains in our accompanying video interview, playing for John Mayall's Bluesbreakers was a great job. Mayall respected and fully credited his musicians, letting them all have their time in the spotlight every night. In many ways, it was the best job you could have as a Blues sideman, and Trout was there for five successful and enjoyable years. But when the chance to go solo fell into his lap, as Trout puts it, he knew he had to bite - even though he knew that once he was gone, Mayall would never take him back as a Bluesbreaker.

The time was 1989, and it was twenty years since an 18-year-old Trout had taken up the guitar as a serious, career-making option. His gateway to the world of the six-string came when his brother introduced the 10-year-old Trout to the wonders of Bob Dylan. He began playing acoustic and learning to fingerpick, hoping he could impress girls at parties. Later, the Beatles' legendary performance on The Ed Sullivan Show on February 9 1964 taught the young Trout more about the joys of Rock n' Roll, and gave him the understanding of how a band could amount to much more - both in a musical and a fun way - than the sum of its parts. His first real sniff of the Blues came courtesy of Michael Bloomfield, the innovative and too often overlooked guitarist with the Paul Butterfield Blues Band, and something was awakened in Trout.

He began playing more seriously, and by the age of 18 was in a decent Blues cover band gigging around his native New Jersey. A move to Los Angeles followed, where he began paying his dues as sideman to a number of artists, playing for - among others - the bands of Percy Mayfield and John Lee Hooker. This led to Trout's next big break in 1981, when he joined the blues rock outfit Canned Heat (of Going Up The Country and On The Road Again fame), before being snaffled by Mayall.

After leaving the Bluesbreakers in 1989, Trout's solo career took off quickly. His debut album, Life In The Jungle, was released in 1990, and brought him particular success in Europe. He's produced 18 solo records to date, and has featured on more than 40 when you take Canned Heat and Bluesbreakers recordings into account. Whatever record he finds himself on, Trout's impassioned playing style is always recognisable, his Stratocaster-based tones always full of a unique sense of feel.

Here is a guitarist from the Jeff Beck school of thought: where the emotion and meaning of a single, considered note can trump the flurry of technically-perfect but emotionless sweep picking that characterises so many 21st century guitarists.

He's also a simple man when it comes to gear. Trout's main live squeeze for decades was a maple-boarded 73 Fender Strat he bought in 1974, and which has remained almost totally stock in the 40-something years since. The only modifications he has made have been to replace the original bone nut with a brass substitute - to cope with his full-throttle string bending technique - and to rewire the tone pots to give more control over the guitar's treble on the bridge pickup. Trout reluctantly retired this guitar from live duty when it became more difficult to carry guitars on to planes as hand luggage in the 2000s - he just couldn't risk it being lost or seriously damaged - and has found a more-than-able replacement in an almost identical guitar, a '73 hardtail Strat which he has had modded to feel, play and sound as close to his original as possible. A Trout Axe Replica, if you will (obscure Captain Beefheart pun noted and forgiven - Ed). This second guitar has had its neck changed and sanded down to match the profile of its predecessor, and Seymour Duncan crafted Trout a set of custom pickups that he feels totally and authentically recreate the sounds of the original.

Trout plugs his Strat straight into a MESA/Boogie Mark V amplifier. He doesn't use FX pedals, except for a floor-based control for his MESA Leslie-type speaker, which is activated for a little bit of subtle chorus here and there. Trout's clean and overdriven sounds come from his amp, his fingers and expert use of his guitar's volume control. Believe it or not, Trout's Mark V is actually tuned in to MESA's recommended settings for Death Metal! Trout's pinkie is never far from his volume knob, though, allowing him to go from beefy cleans with the volume set to about 1, to bluesy, slightly overdriven Marshall-esque tones on about 5 and 6, and full-on distortion and endless sustain between 6 and 10. Who needs a pedalboard?

Now 65 years old, Trout is back out on the road in 2016 with his newest record, Battle Scars, in the can. But he almost didn't make it. In 2013, Trout became seriously ill with liver disease. By early 2014, he was hospitalised in LA and close to death, a transplant needed to keep him alive. In the USA, medical treatment can be exceptionally costly, and Trout's health insurance would not cover the outlay of a transplant. Things were looking bleak.

At this point, friends, family and fans stepped in to save Trout's life. A Crowdfunding campaign - Walter Trout Needs a New Liver - You Can Help! - was set up to raise funds for the operation. The page was started by Kirby Bryant, the wife of British Blues Rock stalwart Danny Bryant, for whom Trout has been a mentor for years (even since Bryant was 15, in fact). Trout's wife Marie also played an extremely active role in the fundraising effort, and the campaign raised an extraordinary $125,000 in five days. It went on to secure a whopping $241,000 from more than 3,000 individual donors, which was enough for Trout to get the help he needed and to restart his path to health.

It has not been easy. Trout almost had to restart the guitar from scratch, building his strength and picking skills as if from new again. But the music and creative juices are flowing once more - and it's fair to say that this is a man who has been through enough to give him enough blues to last another few lifetimes. Battle Scars, which hit stores in late 2015, is a sobering yet uplifting listen - a deeply personal and emotional collection of songs documenting the ups and downs of Trout's life, and his journey from death's door to the now joyous feeling he experiences whenever he plays, sings and performs for his fans these days.

And, as you might expect, he now feels an even deeper connection between himself and his supporters. As Trout says on his official website: I don't take this lightly. Marie says that all of the people who donated to our fundraiser for my medical expenses bought stock in me and my liver. When I play for them now, I have a responsibility to give back and offer the very best that I have. 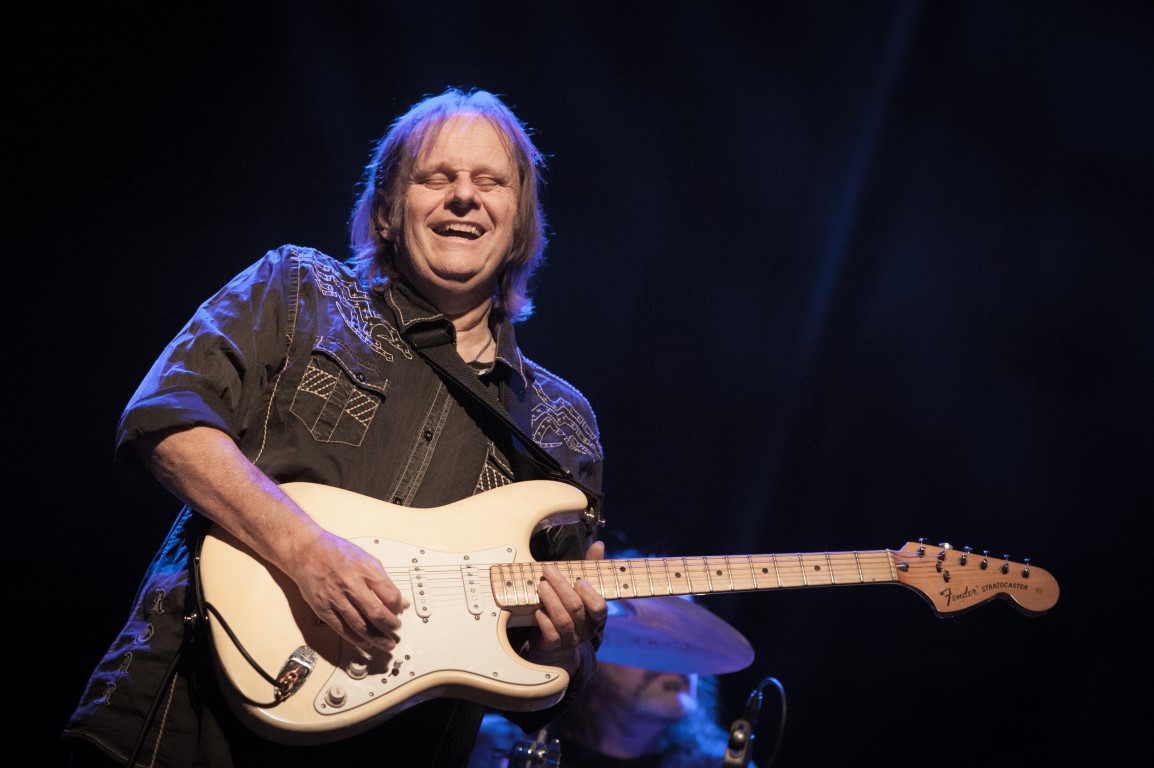 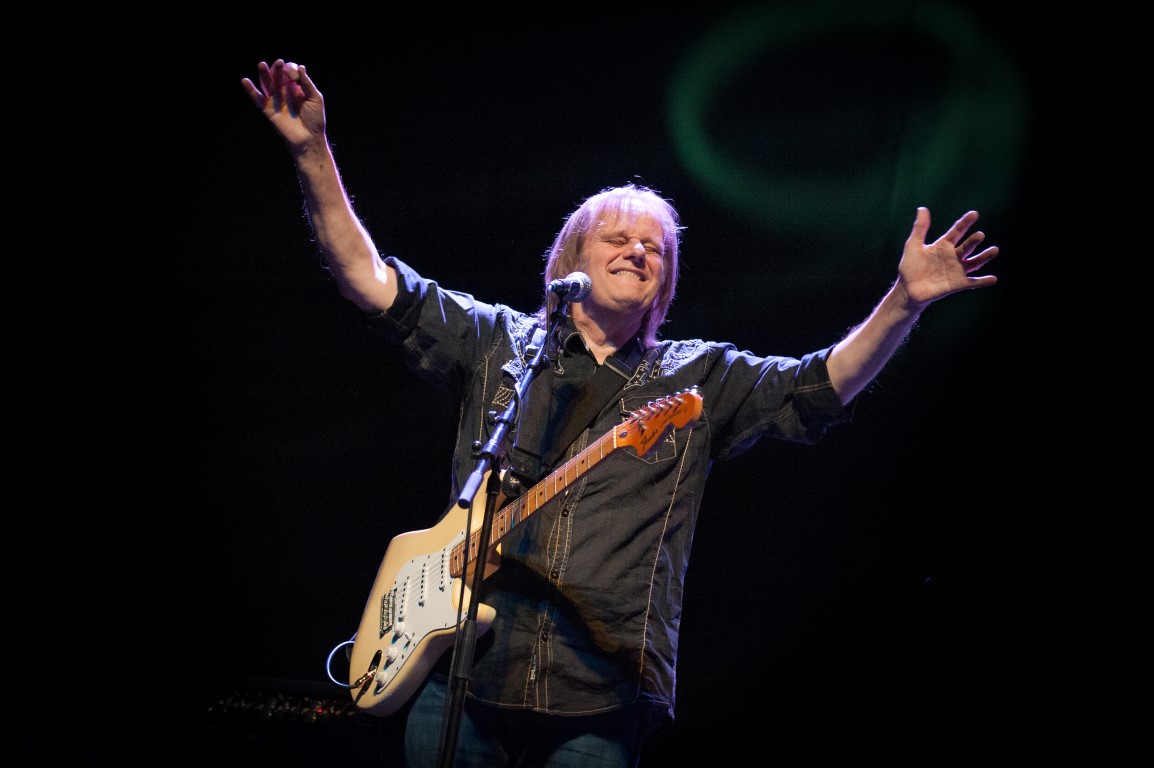