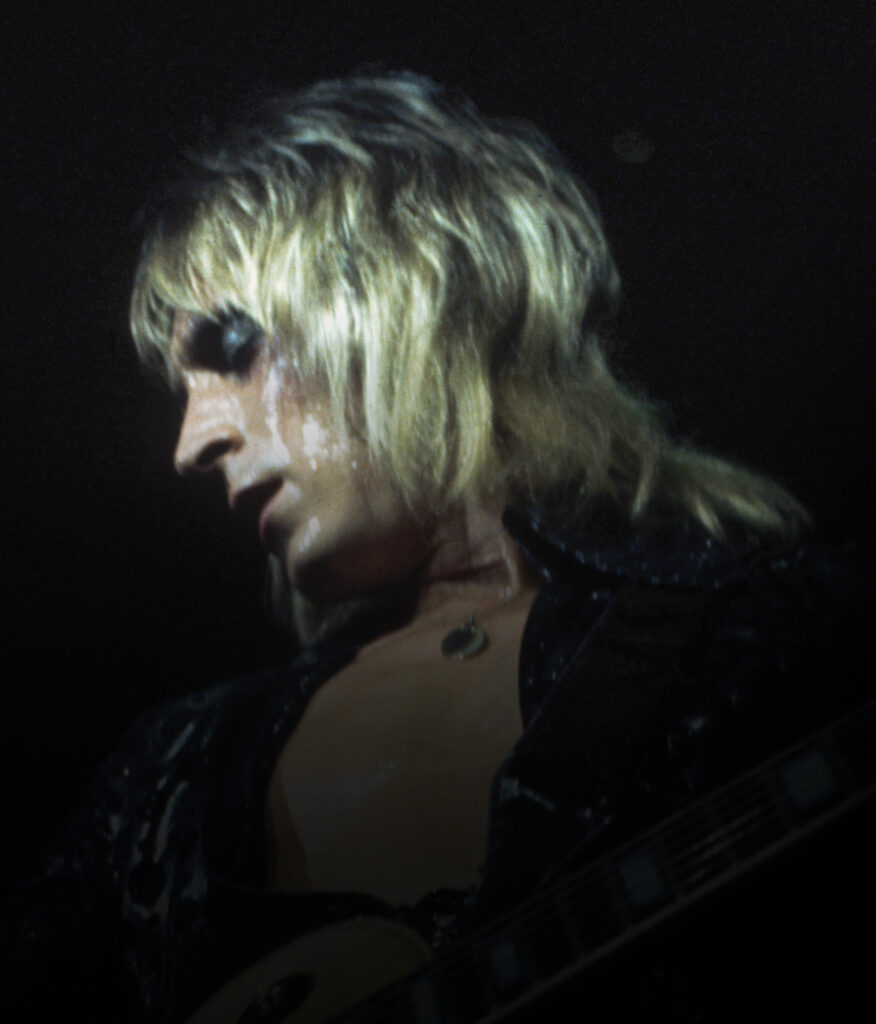 "If you want to hear why I think Mick Ronson was so important, listen to the playout of Lady Grinning Soul from Bowie's Aladdin Sane. People talk about classic solos and classic sounds - that playout is so good that I think it puts a lot of "guitarists' guitarists" to shame. Hardly any notes - but such a sound!

Guitar Interactive's vintage gear guru, Phil Harris, demos the exact gear used by Mick Ronson in his short but spectacular career. Gary Cooper provides the background to a classic exponent of the sound of the seventies!

Mick Ronson is one of those guitarists it's far too easy to overlook. If you regard the 1970's Glam Rock era with a haughty sniff then the chances are you are missing out on one of the best guitarists ever to have emerged from the UK. As our vintage guitar expert Phil Harris says: "Anybody reading this article, please - listen to Ziggy Stardust and Aladdin Sane. Whether you like David Bowie or not, push Bowie out of your thoughts and just listen to Ronson. He was a one-off."

Phil isn't out on a limb here. Mick Ronson is one of those guitarists' guitarists but where so many of those beings are lost in the esoteric world of Jazz, Ronson's work was up there on stage in front of the world. One kind of master gets overlooked because he is too obscure - the other because he is too popular.

"The thing you have to remember is that around the turn of the 1970s a lot of the musicians who couldn't get a gig in a Deep Purple joined the Glam Rock thing to get gigs. You had some musicians on that scene who were outrageous and Mick Ronson was top of the tree," Phil says.

Perhaps the first comment to make about the Ronson sound is that it is about as classic of its era as you could hope for - a Les Paul straight into a Marshall stack - with no pedals! Well, OK, a wah wah, maybe a cheap fuzz and an Echoplex, but we can pass on that for the moment. I mention this because it highlights a major difference between players then and players now. It's a difference that keeps rearing its head though is rarely discussed. So let's do that.

In a recent GI review of a solid state amp, one of our review team remarked that, in his estimation, transistor amps were best for distortion and that what really set valve amps apart was their clean sound. Had he written that twenty years ago... well, he wouldn't have been writing for Guitar Interactive, I can promise you! But, as far as the latest generation of guitarists is concerned, many will agree entirely with him. What changed? Pedals. His point was that the classical warmth and response of a valve amp run clean really shines against the brittle clarity you tend to get from a solid state amp. However, a traditionalist like Phil Harris (or me!) will say that, despite several decades of advancing design, the overdriven sound of a transistor amp is almost always inferior compared with an overdriven tube amp.

What makes both opinions valid is modern pedal technology. Today most guitarists get their overdrive from at least one, and often a string, of pedals. The amp just does the heavy lifting. Back when Mick Ronson was making his name, that wasn't the case. There were no sophisticated overdrive pedals in his signal path because they hadn't been invented. All he had was 'wasp in a jam jar' fuzz boxes. What you heard was the natural, authentic, sound of a Les Paul driving a 1960s/70s Marshall head - and that's all.

"The only thing we used to use back then was a wah wah and maybe a bit of echo," Phil says. "The only real exception was someone using a booster - the old Rangemaster, like Brian May does and Rory Gallagher used to, to push front end of an AC30. In fact the only guy from that era I can remember who really relied on a pedal was Eric Bell from the original Thin Lizzy, who used to use a solid state HH IC100 amp with a Coloursound Powerboost. We used to call it Eric's crutch!

"If you want to hear why I think Mick Ronson was so important, listen to the playout of Lady Grinning Soul from Bowie's Aladdin Sane. People talk about classic solos and classic sounds - that playout is so good that I think it puts a lot of "guitarists' guitarists" to shame. Hardly any notes - but such a sound!

"Years later, I'd become fat and old Phil Harris, my Thin Lizzy - and certainly my Glam Rock days! - far behind me. I was running my hire company and one day I got a phone call from Mick Ronson, who I'd never known but idolised. I couldn't believe it! He said he was making an album and needed a Les Paul. He was very matter of fact about it. He said he was doing an album with some old mates and he had no budget and was dying of cancer. He just came out with it - so matter of fact. I got onto Gibson A&R in the UK and they were really helpful. They loaned him a Les Paul for the rest of his life, however long that was going to be.

"There were a lot of flash and fast guitarists around at the time and in the opposite camp you had players like Paul Kossof, who was very Bluesy. But what Mick Ronson brought to it was that he slowed it right down and he'd be happy playing just one note if that's what it took. No one else had the bottle to do that."

So there we are. Watch the video and revel in the sound of some very simple magic that defined an era's guitar sound: a vintage valve Marshall and a Gibson Les Paul. Controlling that combination is harder than it looks and learning the nuances of touch, the way you control a guitar's sound by its volume control as much as anything else, even learning how to use your body posture to control the feedback you are inducing, is an art largely lost these days.

And if you can't afford a vintage Marshall and Les Paul - and who can? - the good news is that you can get closer to that classic '70s sound with the help of some of the best pedals. Maybe better news, though, is that one of the latest generation of all-valve/tube micro amps (some of the small Orange, Laney and Marshall amps come to mind) coupled with many of today's humbucker-powered guitars (I would particularly recommend the Vintage brand LP style models) will let you experiment and develop that '70s era ability to control your sound without resorting to a pedalboard, that helped Mick Ronson sound the way he did.

Our thanks, as ever, to Phil Harris for his insight and amazing resource of vintage gear.