Mark Tremonti Interview - The View From The Bridge 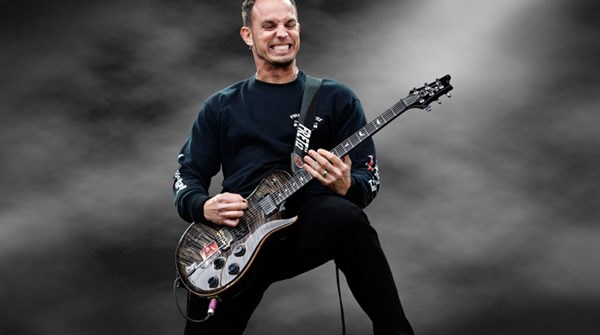 US guitar hero, Mark Tremonti is regarded by many as the best pure Rock guitarist in the world today. Andy James meets the man from Alter Bridge who proves that Rock is still very much alive. Tim Slater profiles a stunning career.

US Rock band Creed was at the cutting edge of a new hard Rock scene that emerged in the wake of the '90s Grunge movement. Grunge itself had forced traditional hard Rock music to take a long hard look at itself and the result was effectively a Year Zero. Virtually all of the genre's previous reliance on formulaic Blues-based riffs and lorry loads of ultra-hold hairspray was ditched, making way for a leaner, tighter sound whose most prominent features included different tunings and fresh melodic ideas.

Creed, who formed in 1993 whist Grunge still held sway, typified this exciting new sound. Whilst many Grunge bands had deliberately avoided overtly technical playing in favour of a stripped down approach that seem to owe more to punk than Metal, Creed took their music in the opposite direction, infusing their tracks with an anthemic quality laced with a healthy dose of unabashed musical virtuosity.

The world was clearly ready and duly rewarded each new Creed album with sales figures that would not only make Creed and their record company very rich, very quickly but it also reflected that HM was emerging from the post-Seattle era leaner, fitter and very much reinvigorated.

Tremonti's stirring guitar work and compositional skills have earned the 39 year-old American a towering heap of accolades including that most prestigious mark of recognition - a Grammy- in 2001 for Best Rock Song (With Arms Wide Open), and the inevitable slew of awards from various guitar-related publications.

Like most young bands, Creed had to endure some early struggles before they attracted major label interest but once off the starting blocks, boy did they gain some momentum! The first four single from Creed's debut LP My Own Prison' each hit the No.1 on the Billboard Hot Mainstream Rock Tracks Chart - the first time that a band had achieved such a feat - whilst the album, freshly remixed for a more radio-friendly sound, went six-times platinum when it shifted over six million copies. The second album Human Clay' eclipsed its predecessor, debuting at No.1 on the Billboard 200 and eventually achieving Diamond courtesy of its 10-million plus sales, whilst its first single Higher remained at No.1 for an incredible 17 weeks. It seemed that Creed could do no wrong.

The band's incredible velocity eventually ran out of steam by the mid 2000's and problems within the band eventually led to Creed making the shock announcement that they had split in June 2004, much to the dismay of their legions of fans. However, despite vowing never to reform, Creed reunited in 2009 and today it is pretty much business as usual, the only difference being that found member/guitarist Mark Tremonti currently divides his time between Creed and an offshoot band Alter Bridge that Tremonti formed shortly after Creed initial split.

Mark Tremonti is anything but the archetypal lazy Rock star. With so much success he need never work again if he wanted but the Floridian virtuoso seems driven to create and always has a project on the go. Besides running two successful bands the guitarist also formed an online musician's community, FRET12 that also operates as an independent production company and record label which served as the launch pad for an instructional guitar DVD called Mark Tremonti: The Sound & the Story. Part tuition DVD, part documentary, this DVD serves as a platform whereby Tremonti demonstrates guitar solos from Alter Bridge's LP Blackbird' alongside detailed analysis of his warm up routine, favoured alternate tuning, fingerpicking and distinctive legato technique.

Tremonti is a highly accomplished guitarist, something ably demonstrated by the versatility of his songwriting. The delicate, pseudo-classical intro and suspended chords to Creed's song One Last Breath echoes some of the work of Alex Lifeson from Rush, switching to crushing power chords that don't mask Tremonti's ability to carve a simple yet memorable melody out of granite-hard riffage!

The Mark Tremonti sound essentially revolves around two core guitar tones: clean and heavily distorted. There is nothing particularly complex about his tone but with typical focus, Tremonti's Alter Bridge live rig is aimed at delivering the sounds he wants with maximum power and efficiency. A behemoth rack system comprising numerous amplifiers and effects is linked to a surprisingly compact pedalboard.

At the heart of the rack sits the perennial US Rock player's stable; the Mesa/Boogie Dual Rectifier head that Tremonti employs to supply his meat and potatoes crunchy rhythm tone. Clean tones come via a pair of '65 Reissue Fender Twin Reverb combos, which are fed by a TC G-Force processor programmed with a variety of delay and reverb patches.

Tremonti's monster solo tones come via a Bludo-Tone Amp Works Bludo-Drive. Bludo-Tone is an independent boutique amp company based in Colorado, US, which makes bespoke amps and speaker cabinets. Its flagship Bludo-Tone head is a 100-Watt amplifier (a 50W version is also available) offers channel switching and switchable preamp voicing. Bludo-Tone also provides another crucial ingredient in Tremonti's live rig. The Bludo-Tone Loop-a-Lator' is a one-U rack impedance matching device that Tremonti uses to balance the different impedances of his various rack and stomp box effects, allowing all of his effects to present a neatly balanced impedance that is compatible with his complex multiple amp setup.

Front of stage, Tremonti's pedalboard is fairly straightforward; a TC Ground Force switching system allows him to change sounds by selecting between different amps and effects whilst an Electro-Harmonix Micro POG octave and Dunlop Uni-Vibe are complimented by his own Signature Morley Wah pedal, which features a variable gain boost that really makes those wah wah driven solos kick in hard!

Tremonti's strong links with PRS guitars sees the company featuring no less than three separate Tremonti Signature models: A US made Singlecut and two SE models. The SE Mark Tremonti is a fixed bridge Singlecut model with a traditional solid mahogany body whilst the whammy equipped SE Mark Tremonti Custom features a maple neck and figured maple top alongside a non-locking vibrato system with a unique up-rout that allows the guitarist to raise the pitch of the strings by yanking back on the whammy bar.

Whereas one gets the impression that some signature models are an excuse for the featured player to either make some cash on the side or boost their profile, Tremonti really does use his SE Signature models live, even going so far as to trade one of his guitars for an SE Signature model that he fell in love with after an Altered Bridge fan bought it to a show for Tremonti to sign! (and if you really want to find out how good they are, we have one up for grabs in this issue's free entry competition! - Ed)

Tremonti's personal favourite axe is a US Charcoal Burst single cut, the second only PRS single cut model made with a whammy bar. Tremonti says that his PRS Signature guitars are all stock, and he strings them with D'Addario strings, blending the bottom three strings from a 0.11 gauge set with the top three strings from an 0.10 gauge set, a balance that he claims gives him the chunky low end he loves whilst saving wear & tear on his fingers!