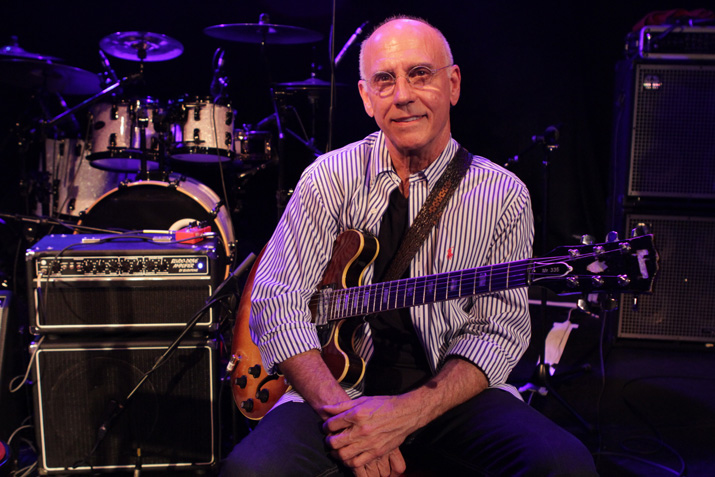 It's a travesty that some of the most heard and influential players in the history of modern music today find themselves as not much more than a name printed on dusty old liner notes from an era when people bought physical music. Players like Tommy Tedesco, Brent Mason and Alan Murphy have created libraries of beautiful music but never really managed to break out into the public eye. But Larry Carlton is a man who broke through that wall like a juggernaut and went from being one of the most prolific session players of the day to one of the most loved and respected guitarists in the history of the instrument.

Carlton's latest recorded output is a duo live acoustic album played with his long time friend Robben Ford and while it's a great record, Larry is at the level where he doesn't need to have anything to promote to be able to pack out a venue. There was proof of that at his recent gig at at London's prestigious Leicester Square Theatre, where GI caught up with him. Without a new album to promote and little publicity, people flocked from miles around to queue in the smoky Soho streets to see an icon of Jazz and Blues.

Picking up the guitar at the extremely young age of six, Larry Carlton took guitar lessons and as any respectful boy would, he did all the things a guitar teacher in the 1950s would have expected him to do. At the time he was heavily into the Jazz greats like Joe Pass and Wes Montgomery but when his grandmother gave him a BB King record it all started to come together and over the next 10 or so years Larry learnt the ways of the traditional players but with an ear for the more contemporary Blues and Rock of the day.

Back in the 1960s there was a lot of money to be made playing music on recording and TV sessions and Larry Carlton became one of the first guys to call because he had this soulful modern sound with great phrasing and bending - but at the same time he could read. So by the tender age of 16 he had already got his first few days of studio work in LA. It was only the beginning. Over the decades that followed, he has appeared on recordings with Etta James, The Crusaders, Joni Mitchell, Steely Dan, Al Jerreau, The Bee Gees, Michael Jackson, Dolly Parton and hundreds more. His catalogue of work includes well over 100 gold selling albums with estimated sales running well into the 100s of millions.

Groups like The Crusaders and Steely Dan relied heavily on the sound Carlton brought to the table and some of his work with these groups in particular, like the famous solo on Kid Charlemagne