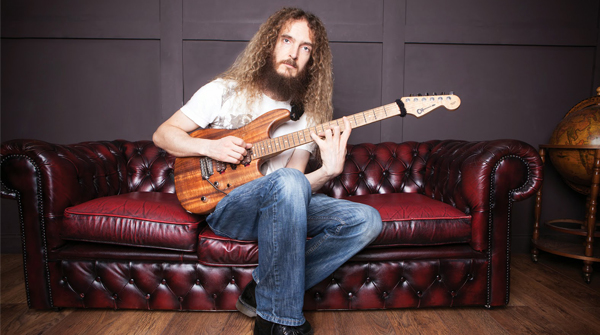 Whenever I've seen Guthrie play chords on the fretless, he wisely keeps it all down to smaller chord fragments and stays mainly with single note passages.

Guthrie Govan - King of the fretless guitar
We received such a huge response to Issue One's Gi interview with Guthrie Govan - in particular questions about his playing on a fretless Vigier - that we invited him back to talk us through his approach to the instrument. Patrice Vigier explains how the guitar came about and Michael Casswell adds his thoughts about that famous YouTube jam with - the king of the fretless guitar!

Though the first exposure a lot of guitarists will have had to fretless guitars (and we do mean guitars - not basses!) was by seeing the fabulous Guthrie Govan playing a Vigier Excalibur Surfretter on YouTube, the idea of fretless guitar isn't quite as new - or as crazy - as it seems. In fact there have been fretless guitars around for some time. In the past, fretless experimenters have include John Cale, Frank Zappa and Adrian Belew - but the instrument has always been not just difficult to play but highly problematical to build, not least because of the difficult choice of fingerboard materials. Wood doesn't work too well, which has led to some people trying even glass as an alternative.

French master guitar builder Patrice Vigier decided to take a typically unique approach when he set out make a fretless model but even so, as he explains, it took him 17 years before his Excalibur Surfretter began to find fame!

"I started to work on the design around 1979 and the first Surfretter was introduced in 1980. My biggest problem was with a wood fingerboard. Using wood you have no sustain on the high strings. You have two factors - the damping of your fingertips, because they are skin, and the damping of the wood. Even if you use a wood like ebony it's relatively soft so it absorbs energy. I experimented with several materials before deciding that Delta metal worked best. Using that, we can produce a guitar that has sustain almost equivalent to fretted instruments."

What had led Vigier to introduce a fretless model - had players been demanding one? "No, not at all and for 17 years it was a very frustrating experience because every year I was making new instruments for trade shows and nobody was interested - nobody! I was about to give up and accept that nobody wanted to expand their horizons."

Fortunately, Patrice gave the concept one last shot, this time as one of his Excalibur models, Shawn Lane adopted the guitar and Ron 'Bumblefoot' Thal followed. Suddenly, the Vigier fretless was starting to be heard and seen. "Ron Thal, in particular, has done some amazing stuff with the guitar," Patrice says.

Though sales aren't gigantic, interest in Vigier's fretless models is growing and they are available internationally as stock models - though you may need to hunt one down or get one on special order. Certainly, Gi has had tremendous interest from readers who have seen the famous YouTube jam with Guthrie Govan on fretless and our own Michael Casswell. And just in case you are one of the few who hasn't yet seen the video, we've included it in this feature.

Michael Casswell recalls the day the jam took place: "It seemed that Guthrie had only recently taken delivery of the Vigier and I did think to myself that maybe it might not be such a wise move for our filmed jam, considering how accurate you have to be with a fretless guitar to make it sound anywhere near musical! But sure enough, he played great with no frets - the film of our little jam went global, and the Guthrie Govan mythology had even more fuel to feed upon!"

Did Guthrie explain how the idea came about? "Well, I did run into a 'reliable source' (as they say when it's completely made up in the tabloids) who informed me that in the dim distant past, Guthrie was sharing a flat with a couple of other musos, and one drunken night they all decided to rip out all the frets from a Squire Strat to create a more expressive instrument. The result being that there was a pseudo fretless guitar laying around, that young Guthers could experiment and practice on! I can't verify the story, but it would make sense. Also he did also tell me that for a good while, he got very into playing fretless bass, which would also help for pitching and vibrato.

"The one fact about this Vigier fretless is it will absolutely take no prisoners with your playing. Do you remember what is was like when you first picked up a bottleneck, started sliding it up and down your fretboard trying to sound like Joe Walsh? Did you sound like Joe Walsh? Of course not. I'm sure Joe Walsh didn't even sound like Joe Walsh when he first picked up a slide! Well this guitar or any fretless guitar, is a similar mindset, and will take some patience and perseverance before you start making anything close to something we might recognise as music. Notice the first thing Guthrie talks about is the first thing you should work on, which is actually getting notes to sound in tune.

"He equated it to singing, in that as you play the note, you have to listen and adjust the pitch very quickly. The more accurate you are with the placement of your fingers, the less you would have to quickly adjust. Much the same as slide guitar. You may have a very large problem if your ear does not tell you how to adjust.

"He also talks about how some chord shapes on the fretless are simply a no-go area, due to the way we have to place our fingers to voice those chords. Which means you need to be up on your inversions, chord fragments and actual, accurate clear sound production, to make chords work on a fretless guitar. This can be a big subject on a fretted guitar, let alone a fretless, and whenever I've seen Guthrie play chords on the fretless, he wisely keeps it all down to smaller chord fragments and stays mainly with single note passages." 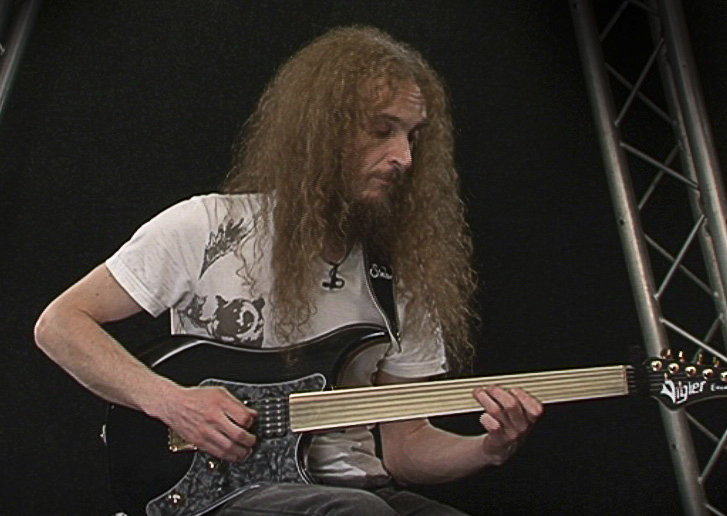