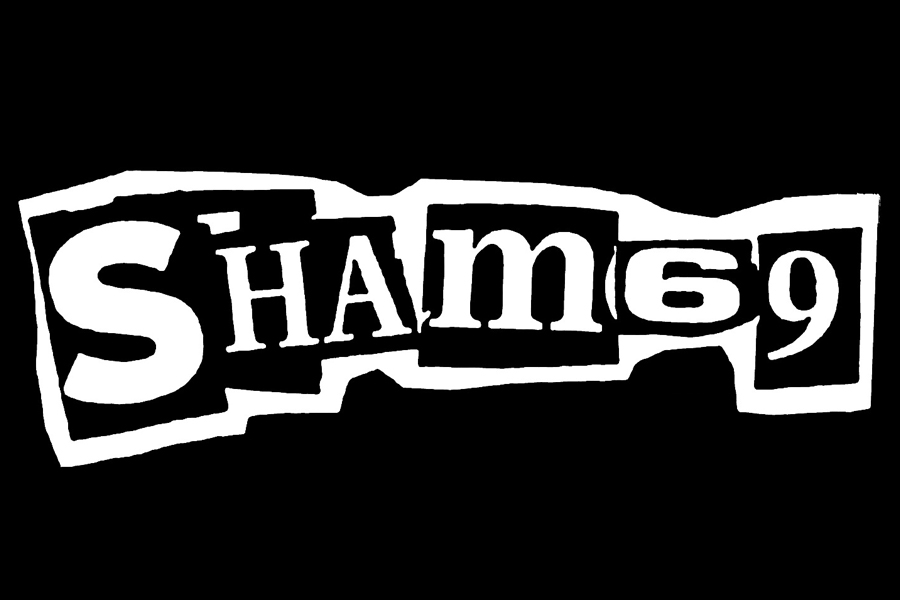 As headliners go, in punk rock, unless the Clash ever perform with a hologram of Joe Strummer or if the remaining Sex Pistols ever forgive John Lydon for his infamous role in the County Butter adverts of the late 00s, then they don't get much bigger, brasher and ballsier than Sham 69. Daniel Smith

The Kentish Town Forum for those who don't know is situated in northwest London, in the rock hotbed of the London Borough of Camden and is one of the few remaining music venues left in London that still places a focus on live music. Take a look at the listings of any month and you'll see a myriad of artists playing to sold out crowds each and every night of the week. The above factors coupled with the edgy reputation and strictly urban feel of the area made for the ideal setting of the final date of punk rock icons Sham 69's 2016 reunion tour.

However, before Sham's headline performance the crowd were treated to a damn right gem of a support act in the form of Criminal Mind. The Bristol 4 piece produce a caustic blend of hardcore punk rock but at the same time come with enough technical knowhow of each of their instruments to add glistening melodic undertones. But make no mistake, these aren't no prefab punk upstarts who decided to form a band after listening to too much Sex Pistols whilst studying at St Martin's College, these guys live and breathe it. After approaching the stage, heads held high, still fueled by the fact of supporting Sham 69, they tore into their first 3 tracks of Who's Got Your Back, Dirty Tricks and You'll Never Take Us Down. As they darted about the stage, reminiscent of hungry piranhas furiously swimming around each verse before taking a bite, they hit the crowd with a melee of numbers in No Social Culture, Over Opinionated, Keep Your Mouth Shut, Rebel Sounds and Remember Your Name. However, whilst their breakneck playing and untamed drumming summonsed up audio memories of hardcore outfits such as Subhumans and Minor Threat, their tight vocal harmonies and their habit of switching vocalists meant their overall sound laid somewhere between The Decedents, Agnostic Front and Pennywise. A fine mix of crossover thrash and punk from the late 80s and 90s, only with a 2016 UK slant. They closed their set with In This World, Blood on the Cobbles, Life to Defend and The Way Out. But somewhere in between gave a shout out to who they believed was the greatest wrestler ever, the Texas rattlesnake, Stone Cold Steve Austin. And didn't take too kindly to cries from the crowd claiming it to be The Rock, I was obviously too far back for them to hear me claim my allegiance to the bad guy, Scott Hall.

As headliners go, in punk rock, unless the Clash ever perform with a hologram of  Joe Strummer or if the remaining Sex Pistols ever forgive John Lydon for his infamous role in the County Butter adverts of the late 00s, then they don't get much bigger, brasher and ballsier than Sham 69.

Following nearly four decades of performing, and with a number of trials and tribulations in-between, the original three members in the form of Jimmy Pursey, Dave Parsons and Dave Tregunna hit the road again this year for a reunion tour which quite literally sent the world of punk rock into a spin. After performing dates all over the UK and Europe, Sham closed their 2016 tour at London's Kentish Town Forum.

Looking out across the audience you could feel the anticipation emanate from the mix of older and younger fans packed in awaiting the arrival of Jimmy and co. And when they sauntered on stage the crowd couldn't contain themselves as Sham kicked off proceedings with Adventures of the Hersham Boys classic, What Have We Got, to which they feverishly  chanted along to. With so many huge songs under Jimmy's low strung belt it must be a chore curating set lists but I'm sure the crowd would agree that the songs that featured on Friday night were a stellar collection of Sham hits. I Don't Wanna, Ulster Boy, Rip Off, Tell Us the Truth and Bastille Cake made up the first onslaught as Dave Parsons and Dave Tregunna flawlessly kept the riffs and chops flowing. Despite front-man Jimmy's scowling demeanour, he lapped up every beer drenching  moment, staggering from side to side bruising the audience with the no nonsense lyrics that poured from George Davis Is Innocent, Borstal Breakout, That's Life and Angels with Dirty Faces. But despite Jimmy, Dave and Dave's prowess as punk icons and musicians in their own right, something has to be said about Sham's now full time drumming colossus, Robin Guy. Robin is a force behind the drum kit and effortlessly hammered out tracks like One Faith, Money and Questions and Answers keeping a tight, loud groove for the guitar and bass. Then came the cover of The Clash's White Riot, which has remained a permanent fixture on Sham's set list throughout this year before closing the set with arguably Sham's most prominent single, a song that supplies a soundtrack for working class kids of every generation, If the Kids Are United. As Jimmy left the stage a towel was hastily found in order to wipe off a curdling mix of alcohol and sweat that had saturated him throughout the show. But it wasn't over, not yet, the crowd knew it, the security knew it, everyone else who was side of stage knew it, here came the encore. As they appeared again, Jimmy stood hands out and bare-chested, almost biblical like at the front of stage. The crowd,  zealous as ever, continued to clamber to get closer, camera phones flashing, drinks raining down as heavy as ever as the encore got underway with one of Sham's newest songs, Corkbrush Field, a tribute to a soldier named Private Richard Arnold who was shot and killed in 1647 for his involvement in an attempted peace agreement during the Second English Civil War. Throughout the set, everyone was waiting for what was about to come, and as Jimmy gave a shout out to his beloved Surrey hometown, next came Hersham Boys, plying the crowd with the addictive chorus of  'laced up boots and corduroys/they call us the cockney cowboys.' Whilst this was obviously one of the highlights of the set, a hard call when you consider just how tight and on point the previous 17 songs were, Sham closed with Hurry Up Harry for the rapturous London crowd.

As previously mentioned this was the final date of Sham 69's 2016 tour and whilst the trio of Jimmy Pursey, Dave Parsons and Dave Tregunna may not be getting any younger, they still possess as much panache and spirit as they did in the 70s and 80s. Which makes one think this legendary outfit may not be done just yet. 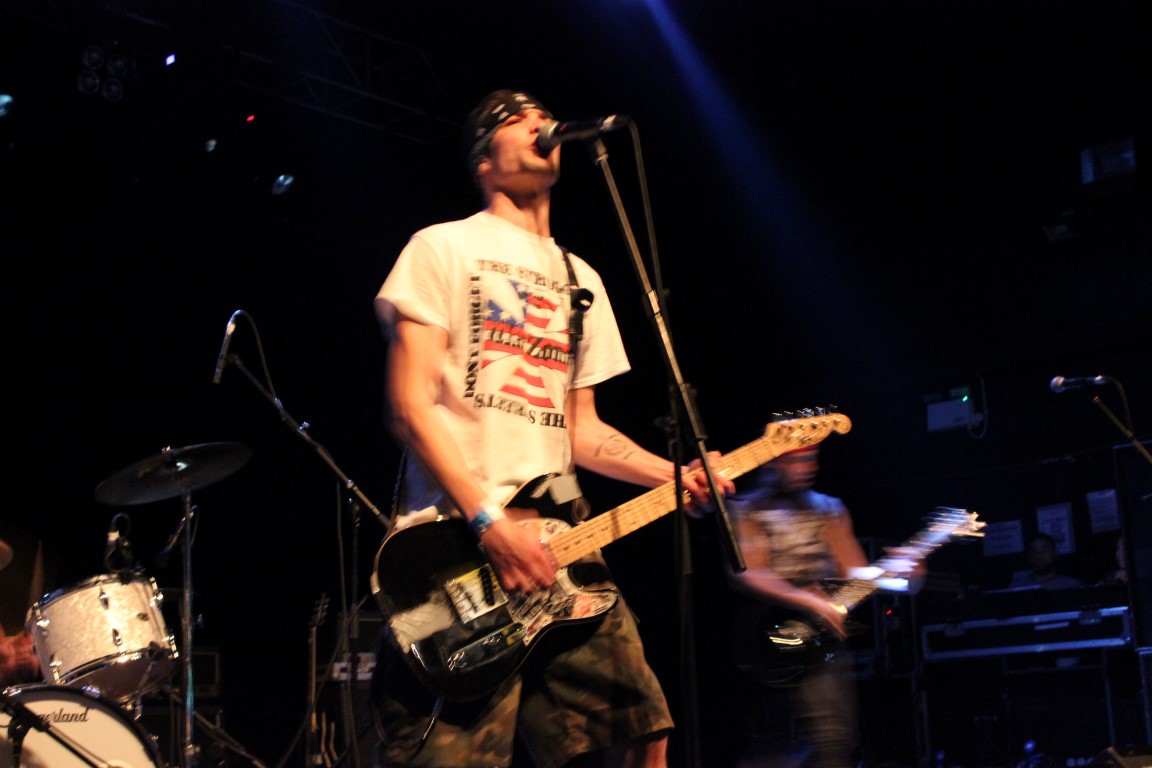 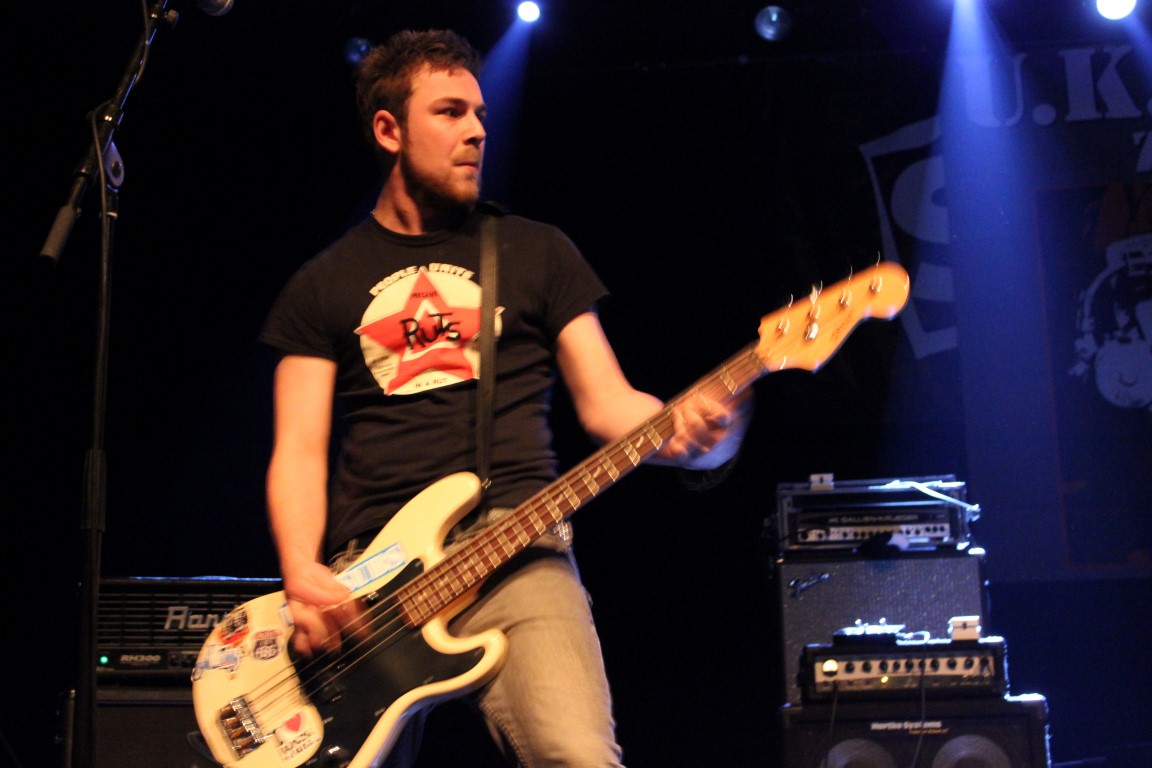 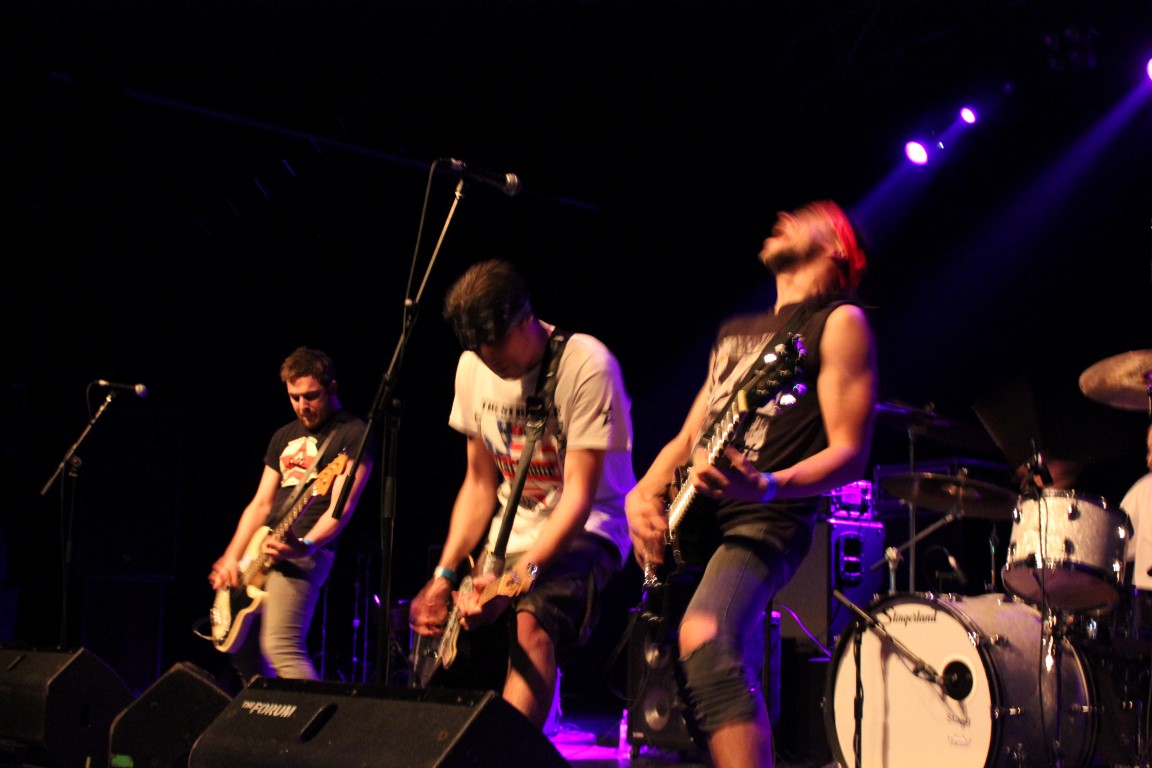 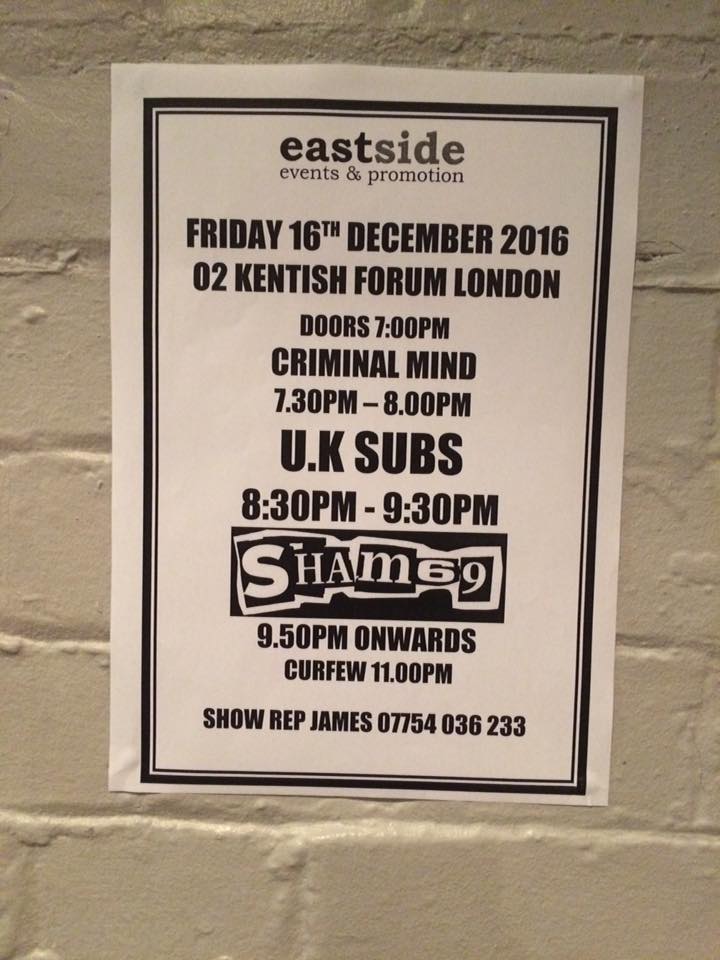 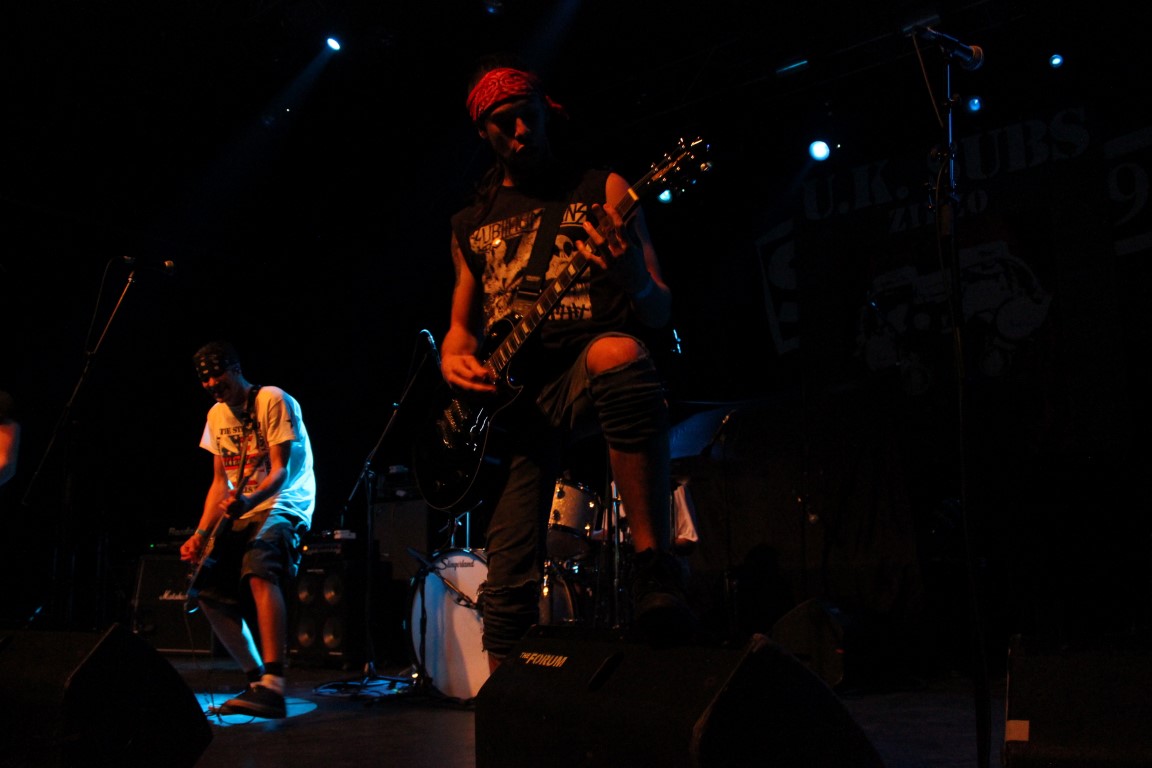